I'm looking to get some collective agreement on a question that I have come across a few times now. When referring to features that are technically independent, what is the general consensus on dimensioning them? Take, for example, the part below: 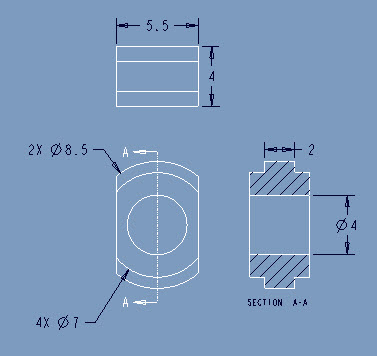 Engineering drawing practice (as far as I've always learned) is to call out the number of places where that feature exists. However, often it makes much more sense to have the feature reported back based on multiple surfaces. For example, the 8.5" diameter would be much more practical (and likely more inclusive of design intent) if it were based on the combination of the top and bottom (as shown) surfaces - essentially a single diameter. Similarly, the 7" diameters would be based on two surfaces on each side of the part.

Now I cannot find any guidance in any of the ASME Y14 standards that clearly indicate how to dimension this. Is there a recognized difference between saying "2X" vs "2 SURFACES" as shown here: 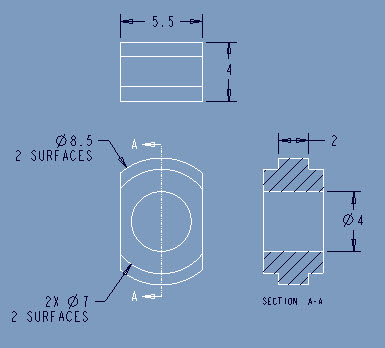 This scenario comes up quite often especially when considering features like crush ribs, or splines, and as I am often reviewing engineering drawings, I've been looking for a specific reference to point to when explaining the differences to other engineers.

I was taught that stating "2 SURFACES" informs manufacturing/metrology that the feature is based on the combination of both (or multiple) surfaces, where 2X implies that they are unique.

I know that the ASME Y14.5-2009 standard introduces a concept called "Continuous Feature" which MIGHT be a solution to this situation, but the examples and definition are still somewhat unclear and a little ambiguous in my opinion.

Does anyone have different thoughts?

5
(de facto) Standards for freehand technical lettering?
2
How to measure changes in curvature?
8
How Can I Determine Multiple Discharges from a Pipe Network? (Knowing the Inlet Conditions)
0
Designing a 1-button system allowing for a differentiated control of 2 different valves?
0
New Part Number for every firmware update?
3
How to model Motor Windings in Solidworks?
0
Why is locating a feature using directly toleranced dimensions not recommended?