The image below shows a common technique for working on valves in the petroleum industry. A secondary valve 2 is closed and allows servicing of Valve 3.

My question is about the blue area. What is the pressure in this area after the valve has been closed? Does it stay at 10,000 PSI? I opened Valve 3 after some time and some liquid spewed out at a safe velocity. I was told by a technician that the pressure trapped in the blue area is safe, and that it will diminish even further if you allow it to sit for more time. I though that pressure could be contained for a reasonable amount of time in such a setting. I thought that we rely on the ability to contain pressure in storage tanks for example. I thought that storage of something pressurized would be possible in a valve setting like this. The technician said it is not possible and that he know first hand from experience. Is this technician wrong? Where does the pressure go?

I have reasoned that it is related to energy and I have come up with a similar thought experiment to explain this phenomenon. I have a pipe with closed ends and many springs pushed together in series contained within the pipe. I also have a device similar to the bladelike one a magician uses when he does the magic trick to cut off peoples limbs in a box. I use a device like this and slide it into the pipe and I isolate only the last spring in the pipe. When I open the end of the pipe, only one spring comes out with limited energy. If I had opened the pipe without using the blade like isolation device, then many springs would have sprung out with incredible energy. Is this a sound comparison and understanding of the concept? 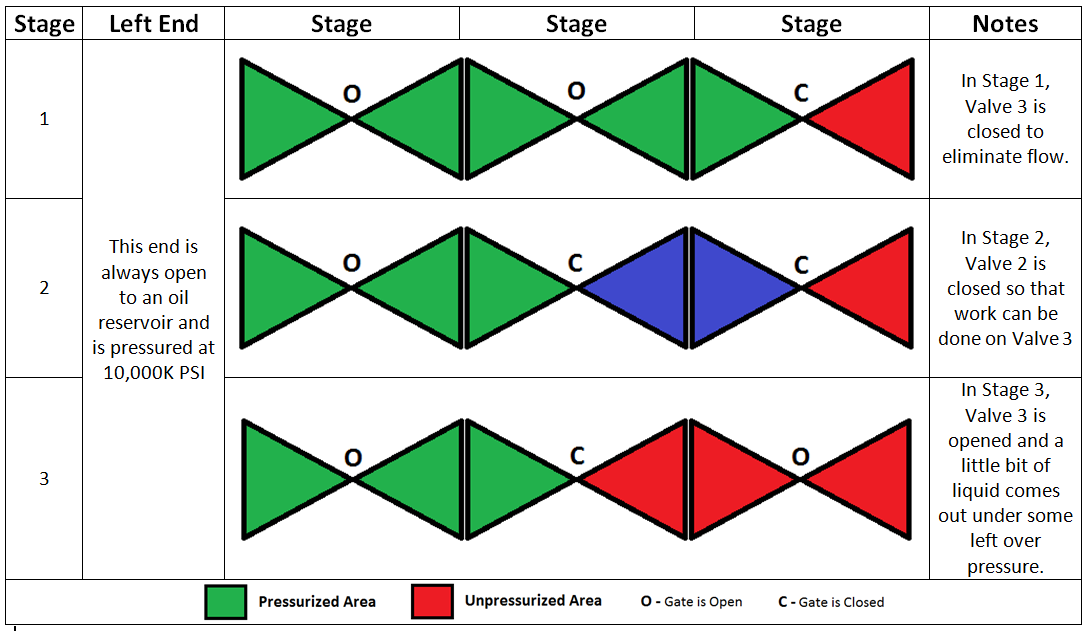 the pressure in the piping system which existed when the valves were closed will remain in the isolated segment of the pipe, which then behaves like a pressure vessel. Note that since the wall of the pipe is stiff and the fluid inside it nearly incompressible, the amount of energy stored in the pressurized "vessel" is small and if you crack open a vent valve connected to it, only a small amount of liquid will jet out of it before the pressure falls to zero. Note also that since no valve is perfect, it would be natural to notice that the pressure in the "vessel" would decay with time. Finally, note that the situation is different if the pipe contained air, which would compress readily under pressure and store a dangerously significant amount of energy in the vessel. In this case, you would need to be very careful to safely bleed off the pressure before servicing the valve.

As noted "no valve is perfect" so any trapped fluid will leak someplace eventually. Common practice is to use "block and bleed" valves with double block valves. Wherein a valve like 12 inch nominal size will incorporate a 1 inch valve that will bleed off to an appropriate location. This would apply to process valves. For well head valves, likely the best sealing valves, block and bleed is not normally used as it is difficult enough to seal ,eg, 10,000 psi without bleed valves as a possible leak source. Apparently it is assumed that anyone operating wellhead valves knows what they are doing.

Not the answer you're looking for? Browse other questions tagged mechanical-engineering fluid-mechanics pressure or ask your own question.

2
How can I make an uncalibrated flow meter for water flows of a few liters per hour
3
Overcoming limitations of a snap in joint
1
Create low velocity pressure drop?
1
Calculating Minimum Pipe Pressure Requirement for an Irrigation System
0
Water flow down a 9% grade for 750' then fills tanks before traveling up 20' over 175'
0
Do throttling devices need valves?
0
What Is The Rectangular Pipe Structure/Loop Constructed To Reduce HighRise Water Supply Pressure DownStream From Roof Tank?
0
Constant flow rate from two closable pipes with single source