How to determine the compressor power in a refrigeration system?

The picture below represents a refrigeration unit 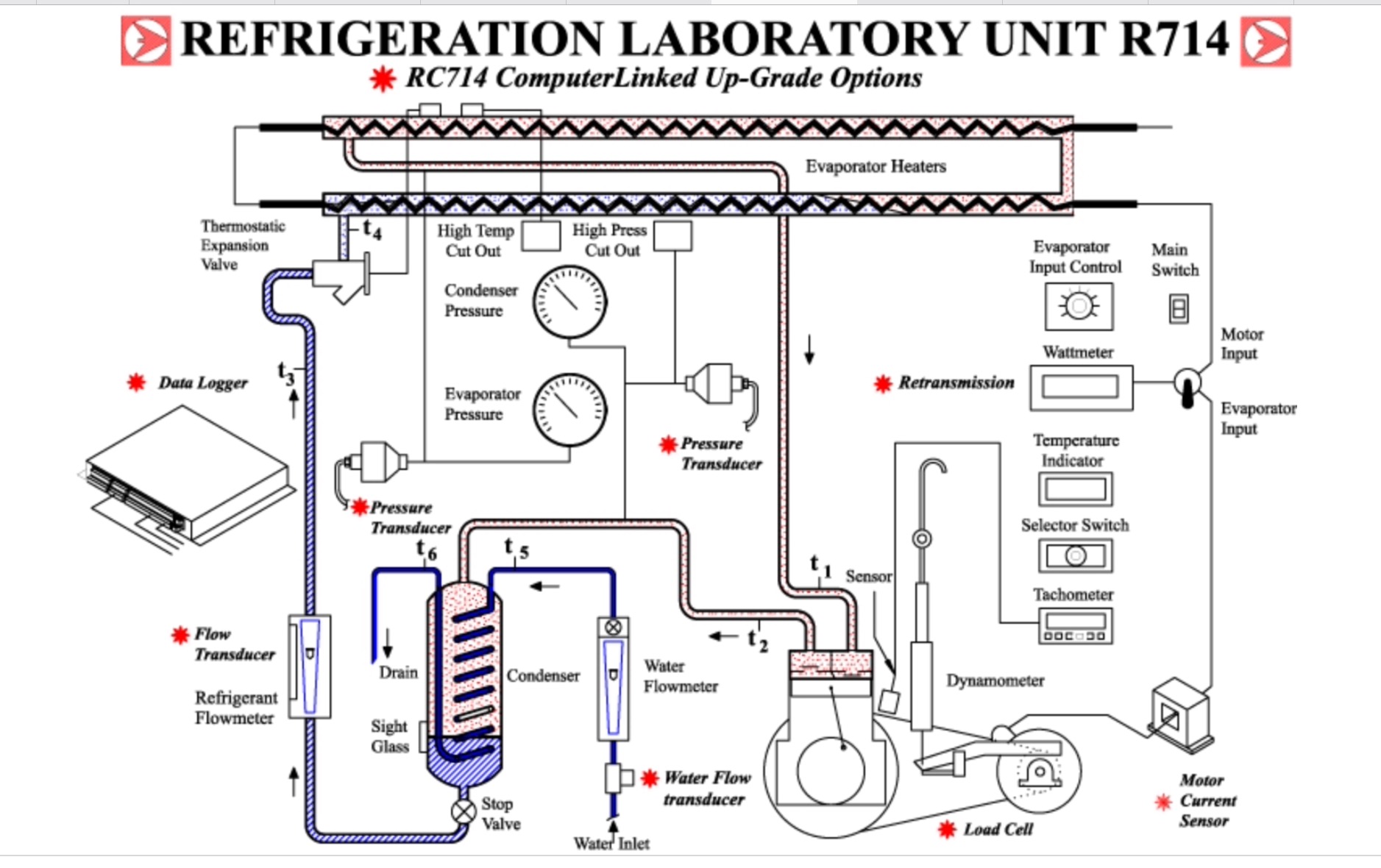 In order to calculate the power produced by the motor, two quantities must be measured

Also, it is written in the manual "Assume typical compressor friction force =5N"

And I think that since there is friction, then power dissipation will occur due to friction and thus Power delivered to the compressor = Power produced by the motor minus power dissipated by friction"

Please, if there is something wrong, correct me

The motor frame isn't bolted to anything. The pillow block bearings locate the entire motor. The torque arm is the only thing stopping the motor frame from spinning instead of the drive pulley.

I don't know what the 5N refers to. If I had to guess, It would say it's the piston rings on the cylinder wall.

Balance the work/power of the system, while accounting for losses due to inefficiencies (frictional, electrical and thermodynamic).

Check out this link for more info on how a dynomometer works. wikipedia

OP has messaged me that his problem is understanding how the spring force setup measures torque. Let's see if this furnishes the answer he wants:

Imagine an electric motor which is connected to a load. Assume that it is performing work on the load, which means that

Assuming a constant force, the net work done by the motor on the load is then w = (force) x (distance) and the power is p = (force x distance)/time.

Now we are ready to look at the motor and the apparatus connected to it. First we note that the electric motor is applying a twisting force (torque) to the load which means the load is applying an equal and opposite twisting force to the motor. this means the motor casing is applying that same twisting force to the foundation it is bolted to, which means those bolts are transferring the torque reaction. In turn, this means that if we can determine the stresses in those mounting bolts, we can solve for the torque being produced by the motor, multiply that torque by the RPM at which the motor is running, and then know the power being produced by the motor and absorbed by the compressor.

The diagram above shows the motor is mounted on a pivot so that anything that applies a torque to the motor will cause the entire motor to rotate about that pivot. To prevent this from happening, a spring force gauge is also connected to the motor mount through a lever. the spring force gauge is simply a spring which deflects a known distance under the influence of a force and hence lets you measure that force.

Let me know if this answers your question. Please note that this arrangement of a force-gauge-and-lever-arm plus an RPM gauge is known as a dynamometer and is the standard tool for measuring the horsepower being transferred by rotating shafts. You can find more examples of dynamometers on the web.

Not the answer you're looking for? Browse other questions tagged mechanical-engineering thermodynamics motors dynamics power or ask your own question.