My classmates are making mousetrap cars to go 10 feet, and whoever goes the fastest wins. How a mousetrap car works is by attaching a lever arm to the snapper (the part of the mousetrap that shoots forward). The lever arm has a string attached to the end of it, and it is wrapped several times around the axle of a car. When you let go of the lever arm, the snapper goes 180 degrees, spinning the axle and making the car go forward. Here is a link for more information: https://www.wikihow.com/Build-a-Mousetrap-Car

I have an idea for a car, but want to make sure it's sound before building it. I plan to have six wheels. The back wheels will be adopted for distance, so it will have a longer lever arm and a thinner axle. The middle wheels will be adopted for speed, so it will have a thicker axle and a shorter lever arm. There will be two strings attached to the lever arm. One will be at the end, and will be wrapped around the distance axle, while one will be near the middle and attached to the speed axle. My reasoning is that the middle wheels will provide a lot of speed, and at the same time make it easier for it to start moving. The back will make sure it keeps going once the speed boost wears off.

What I want to know if doing this will work, or if it would be better to just have two pairs of wheels that are moderate thickness and moderate distance from the mousetrap. This is my concept sketch: 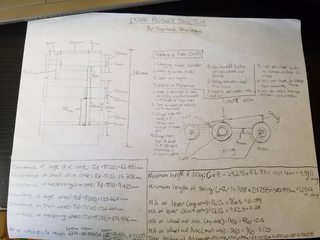 It will be hard to ensure that all the wheels have equal traction. There will be no suspension, so your boost wheels may simply slip.

It sounds like what you're trying to do is have 2 different gear ratios. This is a cool idea, but if they are both active simultaneously some weird things are going to happen. Probably, the high gear will limit the speed at which the low gear can unwind so low gear will not do anything. You include some slack in the high gear to begin with, but this will get complicated an finicky.

An easier way would be modify the arm, so it "gets longer" during the run due to a curved profile or other design feature. See terrible drawing: 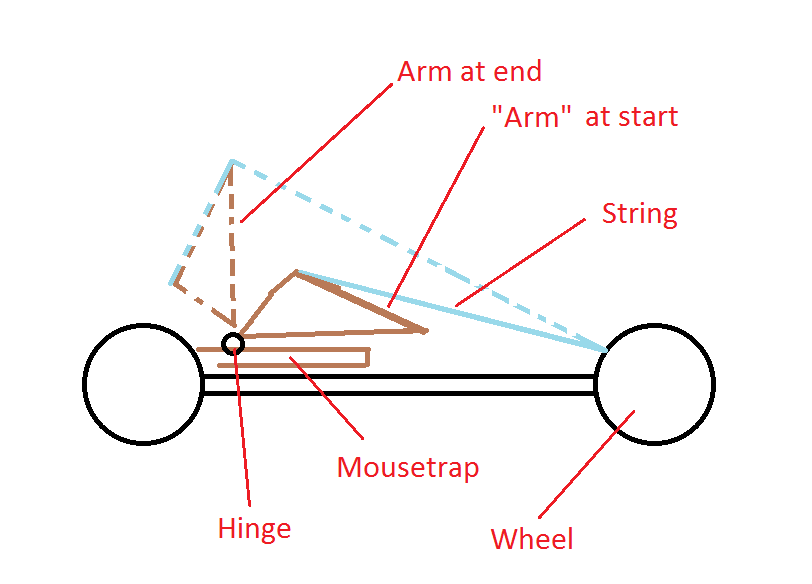 If you try to be too smart, you'll outsmart yourself.

Complicated designs have some things in common:

For a device that has a very simple goal and is very underpowered, those are not good design attributes. Consider this:

The best version of one of these cars I've seen used bearings taken from broken CD players (very low friction) and 3 CDs as wheels.

I think it also had an extension on the trap's arm and simply used reaction mass to launch the car.

7
How can I improve traction on a wheeled vehicle yet reduce friction?
2
Help understanding performance of a Model Car
3
Why do small gears used to turn big gears allow more force with less effort?
4
Why do single speed RC cars use a gearbox?
0
Push / Pull Steering on an axle
1
Why are tri-axle trailers with single wheels more stable than double wheels?
7
When a car with an open differential turns, why does the inner wheel slow down and the outer wheel speed up?