An Argument from Kelvin’s Circulation Theorem 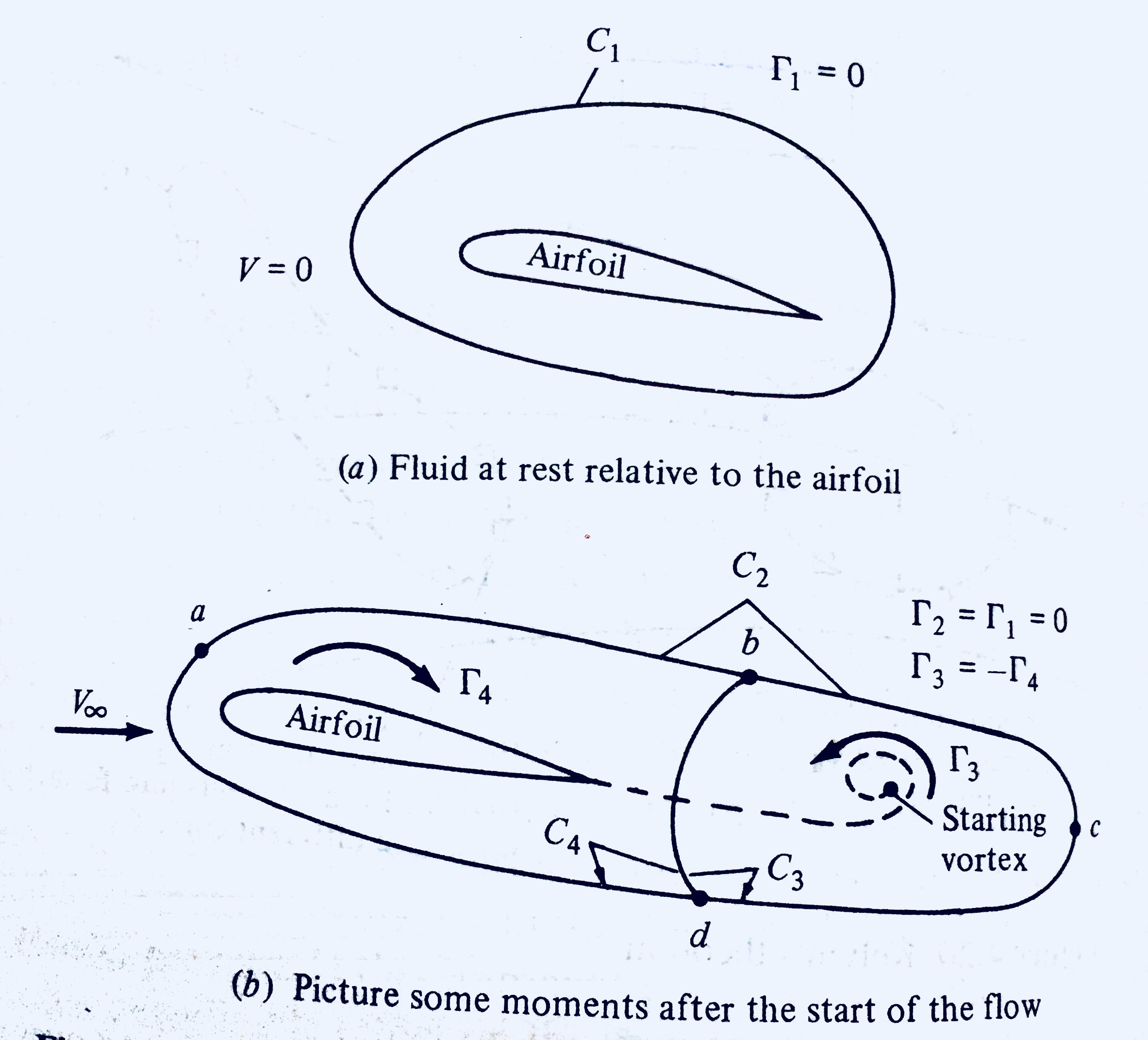 The author here states from Kelvin’s circulation theorem that the initial circulation around a closed loop including the airfoil when the flow is stationary, which is 0, must be equal to the final value of circulation in that closed loop once the flow has reached a steady state.

Now, the above can only be true when the airfoil, once steady-state flow has been reached, is still a part of the closed loop formed by those initial fluid elements.

But, here’s the thing. Those initial fluid elements have by now, crossed the airfoil. There’s no obligation that the airfoil must at all times remain enclosed in that loop, made by those very same fluid elements.

If so, then Kelvin’s circulation theorem simply cannot be applied in the way the author presents it for the airfoil.

If so, then the starting vortex should not be the reason for the development of circulation around the airfoil, or should it ?

Normally you would apply Kelvin's circulation theorem on the whole system such that everything that is important is enclosed by the contour for all times $t$ (note, that the author also expanded the contour form the first to the second picture). The system is consisting of the wing and surrounding air has a circulation of zero at the beginning. As soon as we observe a relative motion between a wing and surrounding air we can observe that there is a starting vortex generated. As we assume that Kelvin's circulation theorem is valid (conditions: inviscid + barotropic flow and volume forces are conservative) we know that a vortex with opposing orientation has to be created to balance the starting vortex circulation.

Remember that circulation is defined by

So your system boundaries must always include both vortices. The mathematical explanation is that a vortex is nothing but a mathematical singularity. The velocity $\boldsymbol{u}_{\text{V}}$ of such a vortex is given by

it is easy to see that $\boldsymbol{u}_{\text{V}}$ blows up for $r \to 0$. As soon as this singularity is at the system boundary it will cross the contour $C(t)$, hence the circulation is not well defined from this point onwards because it is the line integral over this contour. If you start from the point in which the contour only encloses one of the vortices then you can again apply Kelvin's circulation theorem

1
Proving Kelvin’s Circulation theorem
0
Is it possible to generate energy from indoor draft by opening windows on opposite sides of the building?
0
Would a plane lift from ground if in a free treadmill?
3
How to Find Drag Force from Skin Friction
1
Extracting Uncertainty from Numerical Solution
0
Kelvin's Circulation theorem applied to a cup of tea