How to calculate scarf ratio or lap overlap for composites?

I'm building a plane, and one of the solutions I've thought of for connecting the wing spars to the fuselage involves connecting carbon fiber parts. As mentioned in this answer, I found this explanation for how to calculate the scarf ratio:

The scarf ratio is determined by the ratio of fiber tensile strength and the shear strength of the resin. If your fiber takes 3000 N/mm², the resin transmits 20 N/mm² and the fiber content is 60%, the ratio is 1:90, so a 1 mm thick composite layer would need to be joined over a length of 90 mm.

I have tried to find more detailed explanations, but have not yet succeeded. I am interested in knowing where this information comes from. I have at least two specific questions:

I think what I'm missing is that I'm thinking of lap-joints, also mentioned. I think that the orientation of the 20 N/mm^2 surface in the above discussion is parallel to the scarf surface, the surface along which the composite layers are joined. In this case, is the 20 N/mm^2 a tensional strength, or shear strength? looks like it's a combination of both? it would be a shear strength in the case of a lap joint, a tensional strength in the case of a but joint.

A similar question about lap joints is here.

Formulas from "The Behavior of Structures Composed of Composite Materials". Consider this source material for a much deeper understanding of composites.

Yes, and no. What you're looking for is the stress present in the mid plane. With higher fiber content and different preparation, you can have lower or higher stresses in the layer. As such, if you have a 1mm thick layer of composite, and you are pulling with 1,000 N, then for a 1mm wide section of the plane, you will have approximately 1,000 N/mm^2. The amount of "pull" that goes through your shell will be based upon the loads you are putting it through, which can depend on how the layer was prepared. This is discussed more in the text below.

It is proposed above that the resin transmits 20N/mm^2 - this square mm, which is a surface, how is it oriented? Is there something more fundamental that I'm missing?

A significant question. We are orienting ourselves so the loads are being transmitted in the x-direction, the joint is in the y-direction, and the thickness of the beam is in the z-direction. Image shown for clarification. 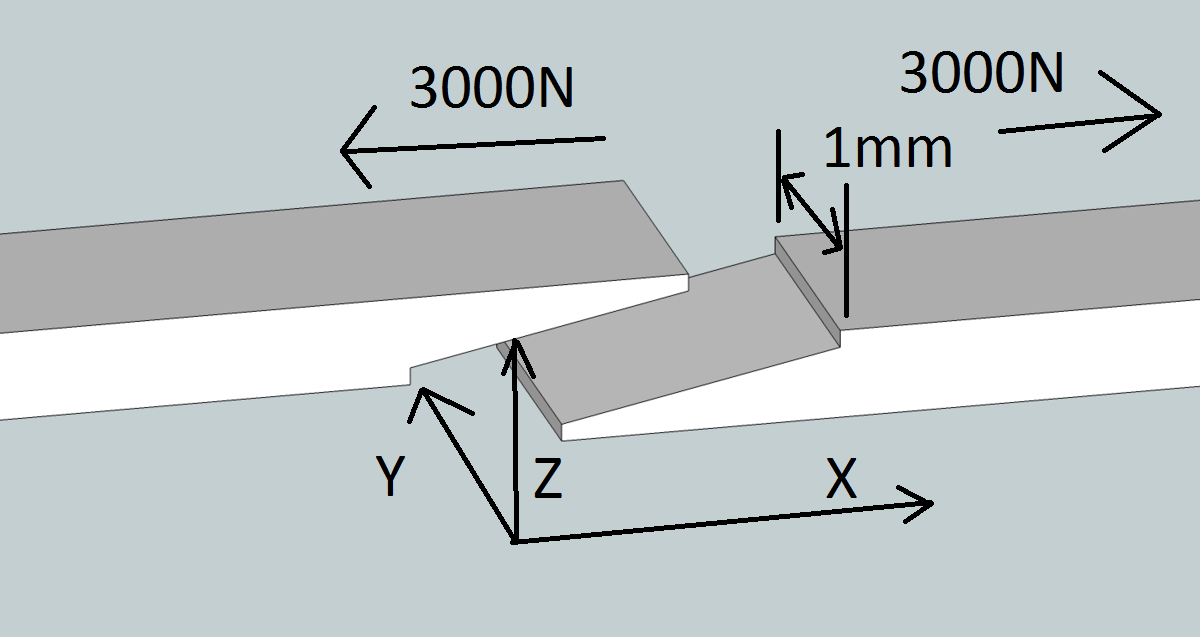 We then look at a 1-mm wide "slice" of the joint - taken in the y-direction, and review. This slice may transmit 3,000 N through the 1-mm wide slice of the joint, and is 1mm thick. If so, we define the adhesive tensile stress / shear stress as follows:

The adhesive may be only able to take 20 N of force of shear stress in a lab specimen. This documented tensile test is then 20 N/mm^2. Per Vinson:

The joint is then analyzed carefully for full analysis. In this example, since the beam is only being pulled, not bent, the shear stress is to be reviewed. Since the thickness of the consists ENTIRELY of adhesive and does not contain any fibers, there is no fiber content to be considered, we simply utilize the shear strength of the adhesive.

As such, the answer before is incorrect. To ensure the adhesive has only 20 N/mm^2 of stress (the maximum the laboratory says it can handle), we apply the formula:

However, most joints have minimal tensile load, and typically have the load in bending. This will cause significant z-direction displacements, which are highlighted into the two formulas. Most joint designs lie between 7-9 degrees, depending on the bending loading, tensile loading, and displacement offsets expected due to loading at the joint. Fiberglass is typically done with a 4:1 - 6:1 length ratio, while carbon-epoxy will reach 12:1 ratios. 90:1 ratios are unheard of in practice,

Not the answer you're looking for? Browse other questions tagged composite or ask your own question.