Derivation on torque required to raise load, isn't there a force disapearing?

I drew a little picture: 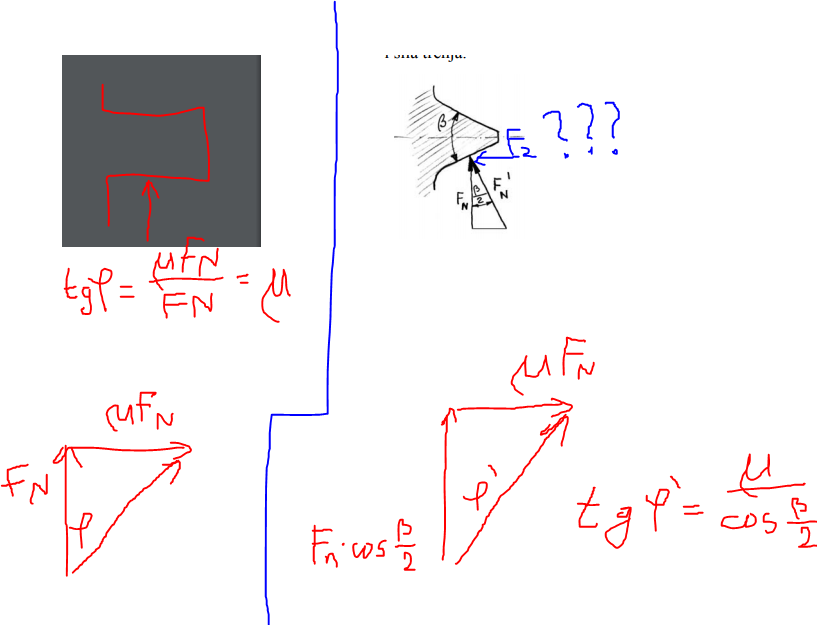 Try to use you imagination to view these pictures as profile of bolt threads. In derivation on torque required to raise load, the angle of friction (ro) is calculated like in the left picture. Then it says that due to the angle of the 'tooth', friction-angle is adjusted, like in the right picture. The problem is, a force F2 should exist, but they just ignore it. Why? I opend Karl-Heinz Deckers famous Maschinenelemente book, where it shows how to get the formula required to raise load, and also at one point it just ignores the F2 force (at least it acknowledges its existence in one of the earlier steps of the derivation, but then just ignores it). Can someone explain this?

From the diagram of the tooth profile in the upper right corner I see FN, FN' and F2. FN coincides with the lifting force so it is relevant to the solution. FN' results in friction which will affect the required torque. But F2 does not affect either. F2 might be viewed as a component of FN', but it doesn't uniquely affect the solution in a way not already accounted for by FN'.

If F2 resulted from, for example, the bolt being too large for the hole, then it, F2, would be a unique force not derived from FN or FN', and would need to be factored in. But that is not the case here.

Not the answer you're looking for? Browse other questions tagged mechanical-engineering bolting fasteners or ask your own question.