I am studying this problem:

The rigid bar ABC shown in Fig. P-212 is hinged at A and supported by a steel rod at B. Determine the largest load P that can be applied at C if the stress in the steel rod is limited to 30 ksi and the vertical movement of end C must not exceed 0.10 in. 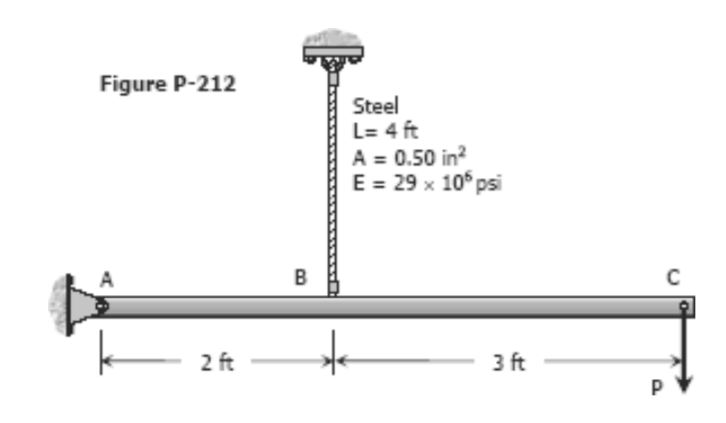 So the solution is: 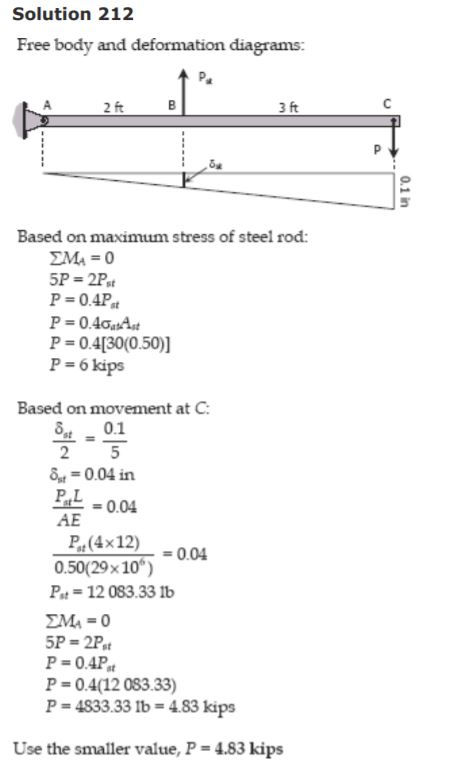 Can somebody please explain the solution?

I will try to explain the solution:

QUESTIONS: 1. Why is the elongation distribution in the length of the beam a triangle?

The "real-life" visualization of the displacement of the system is supposed to be circular. 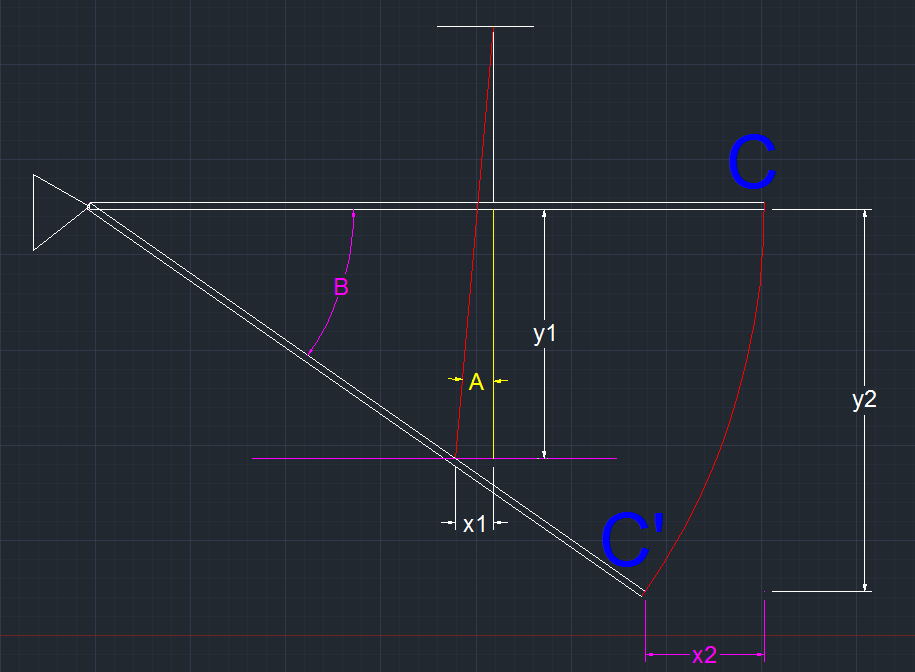 In the picture, the red lines indicates the exaggerated actual movement of points in the system. As depicted, the end of beam, C', displaces by $x_2$ and $y_2$.

To answer your question, the relationship between the original position and the deflected position of the rigid beam lies in the concept of trigonometry. In civil engineering, we design structures to avoid excessive deflections and angular rotations, such that the angle of depression on the beam, denoted by B in the figure, is very small, e.g. B < 5 degrees. Therefore, the expected _vertical displacement, $y_2$ of the system is relatively small compared to the length of the beam itself. Also, it is important to note that since $y_2$ is small, $x_2$ will also be extremely small, which is close to a negligible value. To provide an easier analysis, we therefore then assume that the deflected beam projects a triangular profile because C' is almost vertically collinear with C.

The explanation goes similar with question 1, but this does not include arcs. The simplest I can get is that: For small angles, say angle A, the hypotenuse of a triangle is approximately equal to one of its leg.

Thus, the position of the end of the cable after displacement does not matter anymore as it is very close to zero.

The above explanations makes engineering simpler. Take note that using that concept, you can easily get the displacement of point C just by ratio and proportion.

1: The problem describes the beam as rigid, this means it will not deform and will always remain straight. Therefore when loaded in point C it only rotates about A. This is why you get a triangle when drawing the deformed shape together with the original position and the deformation at the points of interest in the same figure.

2: There is no reason they calculate the deformation of the cable first. However, there are two limits states in this problem. One is at failure of the rod at 30 kip and the other is when the rod has deformed so that point C has moved 0.1 in. You have to check them both.

Not the answer you're looking for? Browse other questions tagged structural-engineering civil-engineering stresses deformation or ask your own question.

1
From strain to displacement in 3d
2
Deformation gradient, strain tensor from cylindrical coordinates
2
Maximum Shear stress in Beams
3
Beams in Bending: Bending stress / strain distrution
2
Structural mechanics - computing bending moment
7
Why is tensorial shear strain half of engineering shear strain?
2
Is the calculated shear strain in a beam, engineering strain or tensorial strain?
1
Question about shear force on the beams