What is the starting/stopping sequence of a traffic light

As is probably known a traffic light may be turned off in which case normal rules applies to the intersection.

Now by what sequence do one start/stop the traffic lights? Stopping seem quite obvious, just make sure that all are showing red (or only those that will have the right of way have green) and then just turn off the light.

But how to turn the lights on again. I think that just reversing the sequence may not be fair - if the light all the suddenly turns red you're required to stop (but may or may not have the time to stop your vehicle). On the other hand entering with green light might be dangerous.

What country? This is different between different countries.

I can give the sequence in Poland, which is standard in most of EU.

Ending just requires minimum intergreen of red signal after stopping all groups normally, before transition to YB - the controller can transition to dark (off) 180 seconds later.

[*] Group - a set of signal lights (often just one signal light) that display the same signal. May be a set of lanes that allow transition to the same exit, or a signal light hanging above the lane, repeated by another on the side of the lane - or two signal lights on two sides of the same zebra crossing.

[**] Intergreen time - time between stopping one group and activating another, necessary for vehicles/pedestrians to vacate the crossing without risk of collision with traffic from the newly opened lane. The intergreen times are assembled into a matrix, each starting group to each ending, with non-colliding entries empty, the remaining containing time that needs to count down from the end of the ending group) before the starting group is allowed to start.

Below is a standard stop and start sequence of a controller; diagram states of each group. The numbers above the diagram are the second of given phase, and phase number of given program. The names on the left are the group names. The program is made for development purposes, so it doesn't retain the 180 seconds restriction on yellow blinker (just to save the time of the developer); actual traffic program would require a 180 second gap between the start and end. 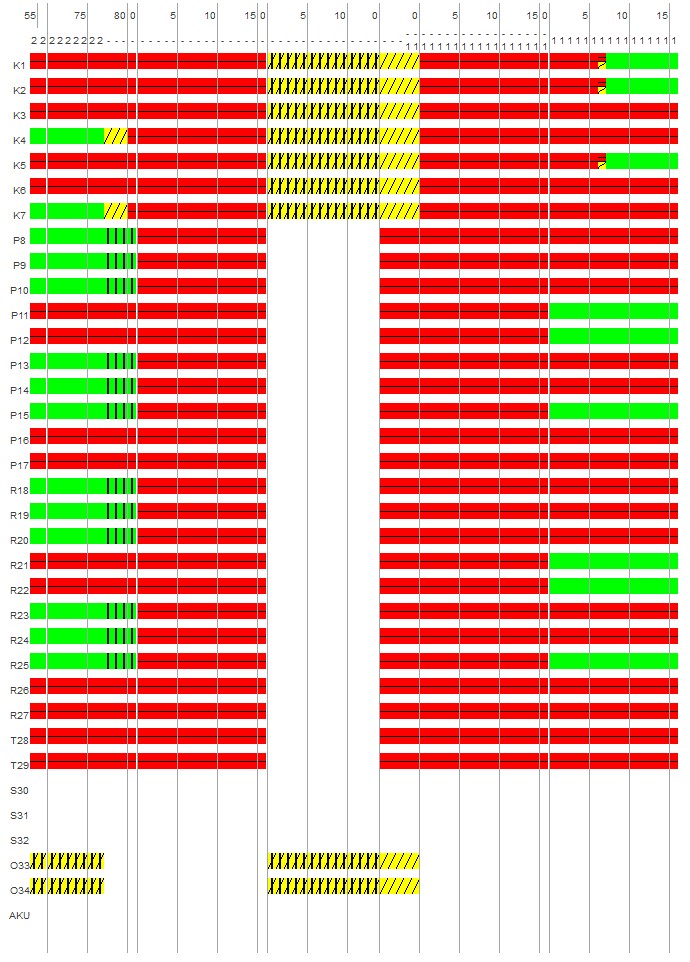 There is another state the lights can be in: blinking yellow. Which means that the intersection is not being controlled and normal priority rules are in force. Going from off to all blinking does not change how you should behave on the intersection.

Going from blinking yellow to solid yellow (longer than the normal 3 seconds) to red gives drivers enough warning that the light will turn red.

If you have a major and minor road on the intersection where if the lights are off the minor yields to major, you can make the minor road turn red and the major turn green. Possibly showing the minor road an extended solid yellow first.

Not the answer you're looking for? Browse other questions tagged traffic-intersections traffic-light or ask your own question.

31
What are the pros and cons of a traffic circle versus a traffic light intersection?
18
How does a traffic light sense the proximity of vehicles?
7
How are train crossing signals and highway traffic signals coordinated?
3
How can traffic signal controllers handle multiple conflicting preemption requests of equal priority without dropping one?
0
What are the disadvantages of free-flow intersections?
2
Where to acquire / create LED optics