I want to build drawers for my kitchen. On Youtube I found this Channel, where a guy does woodworking. In a video about making kitchen drawers, he says that the bottom surface of the drawer will be stronger if the joint connecting the bottom to the sides is positioned lower. https://youtu.be/wLMQ_6Y29pY?t=5m15s (5:15 to 6:03).

To me, it should make pretty much no difference. Am I wrong?

Using a tie-and-strut model makes it easier to explain the difference here. A tie-and-strut model is a simplification of the structure which describes where the structure is under tension, and where it is under compression. The model gets effectively simplified into a truss. Below we have two examples of the axial load on members of two different trusses with identical loading (positive values are tension, negative are compression):

Now, looking at the video, we basically have two possible layouts, which are converted into the overlaid trusses:

Comparing with the truss results shown above, it is clear that the first diagonal emanating from the support will suffer compression in the first format and tension in the second layout.

Now, what will resist the forces represented by that diagonal? The combined plywood layers, of course. However, that force needs to be transmitted from layer to layer. In the case of compression, that transfer is done by contact. However, in tension, that transfer occurs via the glue. If the glue were to fail, then the plywood layers will separate and the structure will progressively collapse: 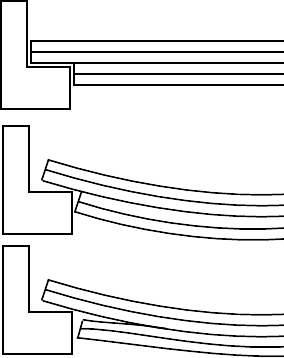 Meanwhile, with the other orientation, that force is compressive, so such a failure is impossible (other failure states will certainly happen before the "compressive strut" collapses).

Not the answer you're looking for? Browse other questions tagged structural-engineering stresses wood or ask your own question.

2
What practical geographical and engineering constraints limit the depth to which you can build underground?
1
How much weight can this stand hold?
0
How to know which constraints suffer from 'nodes are used more than once as slave node' in abaqus?
1
Trying to shed some weight on my design, any thoughts?
1
How do I calculate how much weight an iron cylinder can support?
0
Looking to design a cantilever support to hold up an 80kg projector
5
"Heavy-duty" or not, can my drawer slides really support this weight?
5
What is the term for diagonal bars which are making rectangular frame more rigid?