While calculating hoop's stress we consider projected area. Infact in bearing stress from pins in a truss something similar is applicable.Can you explain why we are taking something like this instead of the curved area?

We cut the vessel in half as shown below.

As pointed in a comment, this analysis is similar to bearing pins in truss member in a way because in analysis of pins, we take the diameter of the pin as equal to the diameter of the hole, thus the pressure in the pin is EQUAL in the half of the pin, as the other side is unloaded. The bearing area is then calculated as the projected area because of what is explained above. In reality, this is not what happens because we tend to increase the hole diameter for ease in installation. Pressure vessels on the other hand is analyzed similar to this because fluid will tend to pressurized all directions with the same value. Thus, bearing area projection is similar in these two cases. 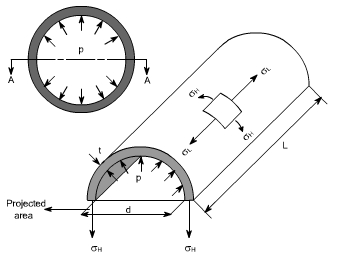 Because some of the curved surface is not being loaded.

10
How do you select the correct area to consiser for first moment of area calculations?
3
First glance: structural integrity of this roof
13
Why do we even use engineering stress?
8
Why don't we use principal maximum stresses when designing a structural element?
2
Percentage error in calculated Forces during simple structural analysis for a truss pin-jointed strucures
0
Structural Analyses of Trusses, method of joints
3
How to analyze a bent beam: Stress concentration?
0
Why does stress act a point instead of on an entire area normal to the stress?