I'm trying to determine the amplitude vs the excitation frequency of a multi dof dynamic system. I'm very confused from reading different methods, although I understand there's a very general one, which is not giving me the results that I think should be when plotting the response. Considering a system with no damping $\mathbf{M{\ddot x}+{Kx}=F(t)}$, and by assuming the harmonic excitation of the force is a cosine the system becomes $\mathbf{-MX{cos(\omega t)}+{KX}cos(\omega t)=fcos(\omega t)}$. From here the cosines get cancelled out so only $\mathbf{[K-M{\omega^2}]X=f}$ remains. By solving for the $X$ vector in the end I get $X = \frac{F/M}{|\omega_n^2-\omega^2|}$.

So with Matlab I wrote the following code, with parameters I found on an example from brown.edu, in which the explanation is not complete, my system is actually a 24 DoF system, so I need the code a bit automated:

Where the main part is the Xt(i,j) = (abs (frequencies(i)^2 - omega(j)^2)\Mag(i) ); , which follows the determined formula for the displacements of each degree of freedom.

When plotting what I get is: 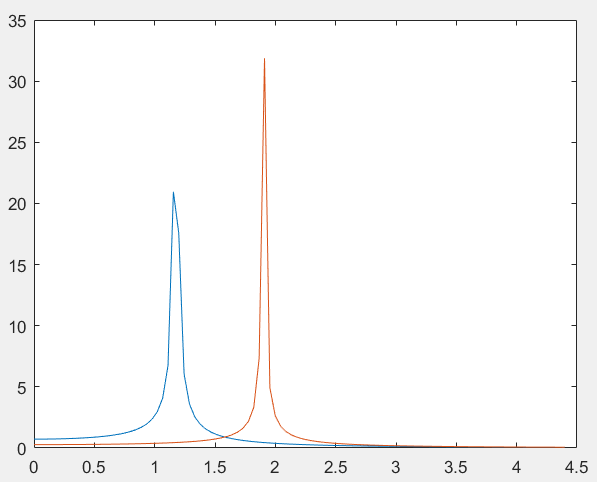 which shows the masses vibrations being at resonance, but from what I understand there should be more peaks and some antiresonance.

What am I missing in the general math?

And the result plot is: 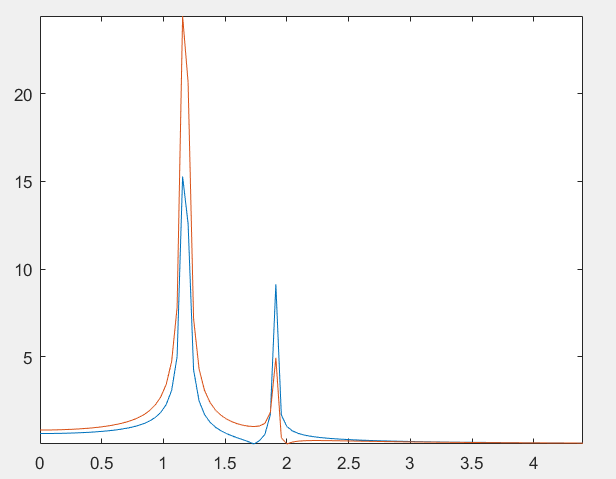 For my extended MDoF system I got: 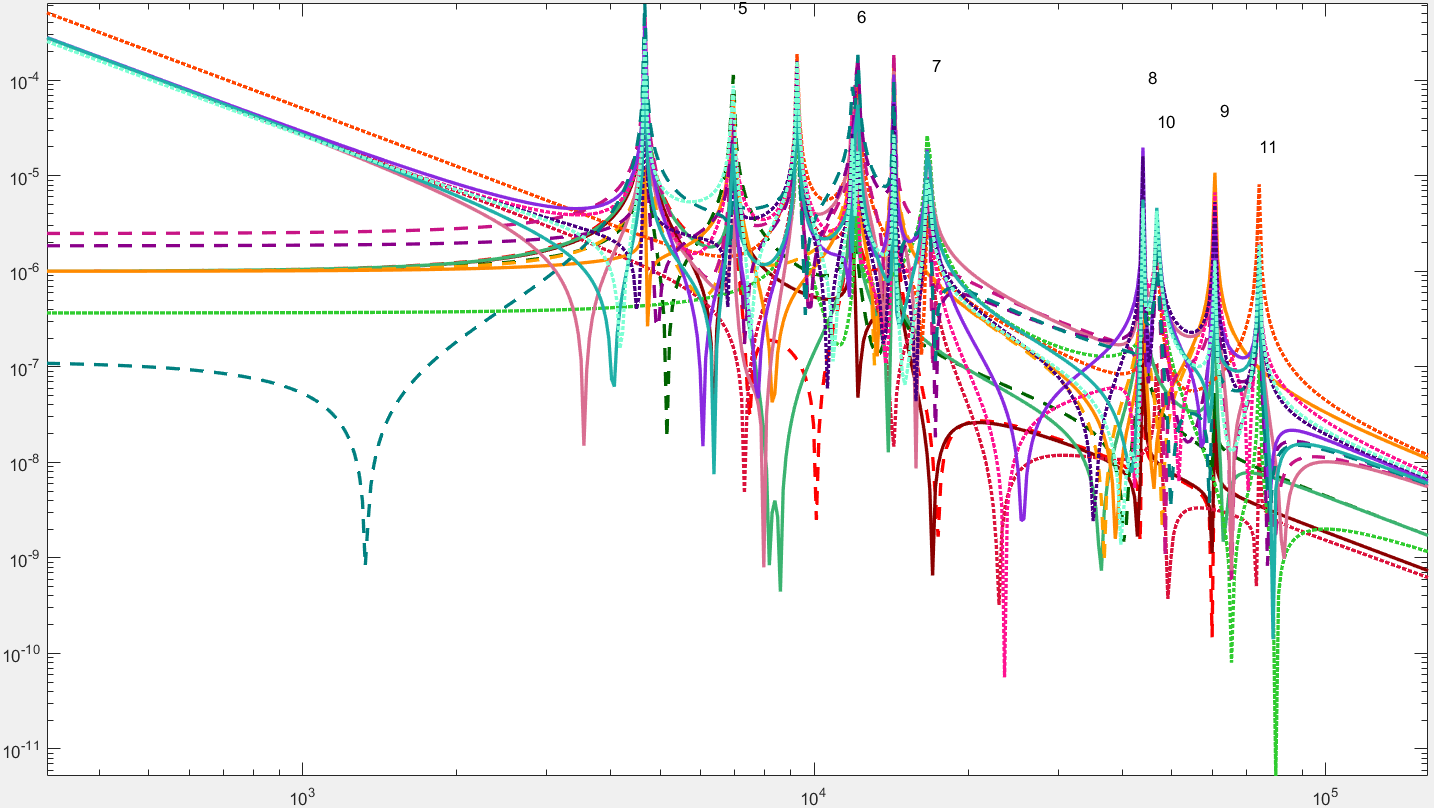 In which I excited all DoF, even when I only excite a single one, it is still very hard to notice what's going on, is there a better way of analysing the response?

The code in your OP seems to be for a 2 DOF system not a 24 DOF system. You could check that by printing the "frequencies" variable from your eigensolution.

The contribution to $X$ from each mode changes its phase by 180 degrees, and therefore changes sign, when the frequency passes through the corresponding $\omega_n$. The antiresonances occur when the contributions from different modes cancel out.

Note, you will probably see the antiresonances better on a plot if you use a log scale for $X$.

EDIT following comments by the OP:

In other words, if $\mathbf{f}$ is the vector applied forces, the $F$ in each term of your sum should be $\Phi_n^T \mathbf{f}$ where $\Phi_n$ is the $n$th column of the eigenvector matrix.

Finally, you need to recombine the $\xi_n$ to get $X$, and then take its absolute value.

Not the answer you're looking for? Browse other questions tagged dynamics vibration frequency-response eigenvalue-analysis or ask your own question.

3
How to simulate the Natural Frequencies of a Planetary Gearbox?
1
What's the difference of using different state-space forms for solving eigenvalue problem?
4
Strategies for cable vibration: eigenvalues are suitable?
1
Physical interpretation of a Bode plot
1
Forced vibration of beam
3
Modeling rigid body dynamics: Trouble with equations, encountering nonsense answers
4
How to determine the dynamic response of a spring-mass system?
0
Interpretation of results in a spring mass dashpot system subjected to harmonic excitation force