What is Saint Venant Principle?

I am having problem with the application of Saint Venant principle.I have heard that quite often we use that knowingly or unknowingly.I would be very greatful to anyone who would explain this very explicitly to me.

The intuitive meaning of Saint Venant's principle is that "if two different sets of applied loads are statically equivalent, then the differences between the two stress patterns they create are only significant close to where the loads are applied".

This is used very frequently in engineering modelling. For example if a beam is bolted to a support with several bolts, the details of the loading at the bolt positions can often be replaced by a single force and bending moment, applied to the end of the beam. That simplified model won't tell you the detailed stresses around the circumference of each bolt hole, but it will tell you the stresses and deflections of the complete beam accurately enough.

It is possible to convert the intuitive meaning of the principle into a precise mathematical statement about the solutions to differential equations for different boundary conditions, but engineers usually just assume the principle is correct!

There are a few situations where Saint Venant's principle does not apply. A well-known example is the torsion of a split cylinder, where a "small" change in the loading distribution can change the stresses and displacements along the whole length of the cylinder. Similar exceptions to the principle can occur (sometimes, but not always!) in any curved thin shell structure which is only curved in one direction measured along the surface, and flat in the perpendicular direction.

To add to @alephzero's answer, here's an layman's explanation of Saint-Venant's Principle: far enough away from the load's point of application, equivalent loads can be treated as identical. 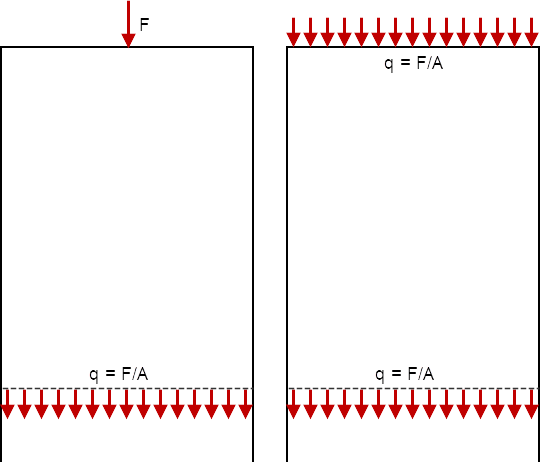 As far as 99% of the column is concerned, it doesn't matter if the force applied is perfectly concentrated at one point or distributed over its surface. Those loads are equivalent and generate the same stresses.

To see how the stress profile is different near the point where the load is applied, trace the "load paths" in each case: 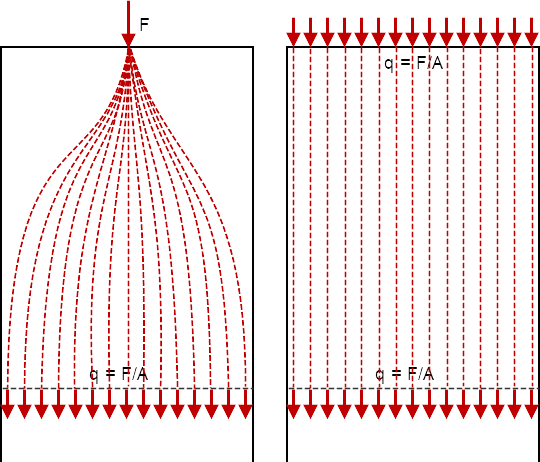 The second one is trivial, so I won't spend any time in it. The first one is a bit more complicated, so let's simplify it into a strut-and-tie model: 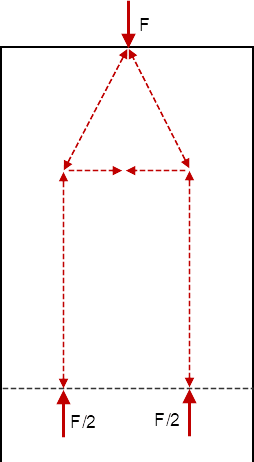 We can see that some tension is created perpendicular to the applied force in the process of distributing the force along the entire section. That tension, however, is concentrated very close to the area where the load is applied. Farther away, the beam behaves exactly as if it were under a uniformly distributed load.

Now, if you're dealing with a concrete column (or some other material with low tensile strength) and you don't handle the tension near the column's head, you might end up with something more like this (think knife and warm butter): 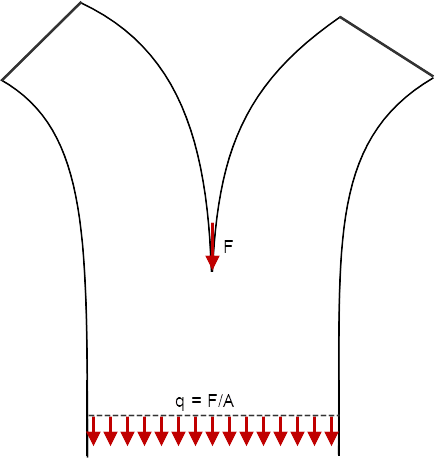 6
What are the technical obstacles for using flywheel-based regenerative braking on bicycles?
4
What is the [PVC] tube or foam in metal springs for?
0
How to pump same amount of paste every time?
0
What kind of bearing should be used for free rotation under load?
1
Surface Area to Volume Ratio
2
How do I determine what hardness to change the bearing or the track?
0
How to calculate beam impact problem
2
Determining elastic limit for a nonlinearly elastic material, to be used for calculating chord modulus (i.e. Young's modulus) in tensile testing
0
When we replace supports distributed reaction by point reaction in thin beams, is that considered an application of Saint-Venant principle?