How can I accurately measure the actuation force of small buttons (<1cm diameter) using home equipment?

Googling "how to measure actuation force" will give you pages of results of mechanical keyboard enthusiast forums, and they often mention measuring the actuation force by stacking pennies / whatever coins you have until the key is depressed and the computer recognises the keypress. I can't do that normally here, since the buttons are really small (<1cm for the action buttons) and even the smallest coin my currency has cannot be stacked onto it without toppling over.

In an attempt to mitigate the problem, I made the following setup. It still uses coins as weights to push down the button, but I rested the coins on the ruler that in turn rests on another object of somewhat equal height/thickness to the game console, in this photo, the remote control seen in the background. I conducted the experiment by continuously adding coins with a game running on the console until it registers a keypress, and then summing up the weights of the coins. 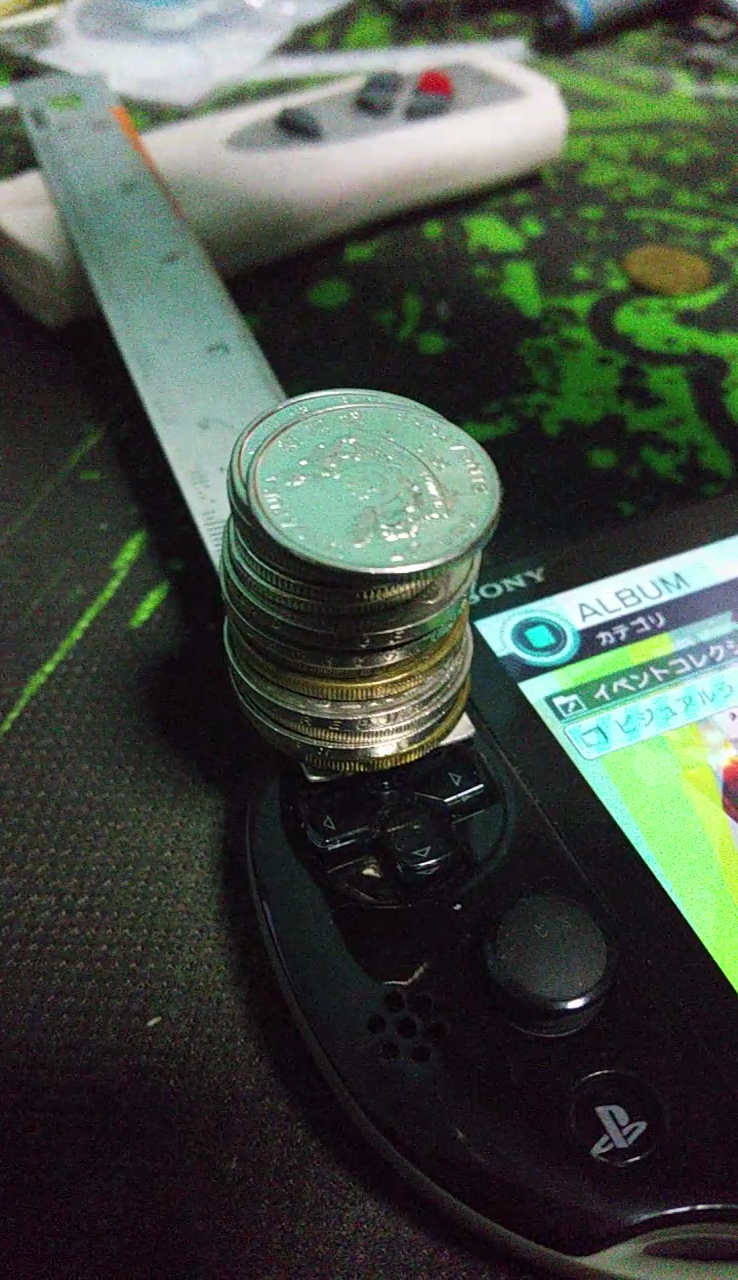 However, the results are rather inconsistent and questionable. I repeated my experiments several times (by knocking down the coin tower and stacking it up again) as standard practice, and I got values ranging from 100g to 180g, which feels extremely high for buttons on a handheld game console, and that large spread seems to be telling me that my experimental technique is just plain wrong.

Some possible causes of inconsistencies from the setup:

Some steps I have taken to possibly improve accuracy:

TL;DR: How can I improve the accuracy of my setup, or other better ways to measure actuation force of such small buttons?

Update & Final Results I used the weighing scale method, and the results are 80g for the D-Pad and about 120g for the action buttons on the right. Thanks everyone!

If you want a quick and somewhat inaccurate hill-billy engineering answer, I would take a digital kitchen scale and place the PSV ontop of it, tare it, then load up a program to test the buttons (game, menu, etc). with the scale device zero'd out, slowly depress the button until it is read by the program. a full actuation can and will differ from the triggering of the circuit. Wait for the program to read the triggering rather than the button's actuation, and add a few extra grams to it.

If you want a precise measurement... I have no idea what you have available for building as far as "home equipment" is concerned.

Not the answer you're looking for? Browse other questions tagged mechanical-engineering measurements torque experimental-physics or ask your own question.

7
What was that?! Quantifying the impact of a martial arts strike
0
How can I *more accurately* measure the weight of a hanging bottle?
0
Can foil strain gauges measure strain normal to the plane of the sensor?
0
How can I measure the coefficients of friction of pulleys?
0
How to measure number of strokes in a small space
3
What's the most practical way to measure angular velocity for small rotations?
1
How to measure the power output of a stirling engine
17
How can I measure correctly with a ruler?
2
Rubik cube torque experiment - Correct equations and experiment set up?