Why does a vehicle under crosswind need corrective steering?

If we consider a stationary car, a moderate wind hitting it broadside might tilt it a bit, but not move it otherwise. Now, consider the car moving perpendicular to that wind (e.g., driving straight forward). If the car were a rolling rigid body, it would still move straight ahead so long as the wind is not strong enough to overcome the friction between the tires and the road. However, experience says that it can sometimes require a significant steering input into the wind to keep the car moving straight ahead. What about the dynamics and architecture of a vehicle make it tend to steer itself when subjected to a crosswind?

This is primarily caused by "side slip" or "slip angle". This occurs because tires are not rigid, but pneumatic bladders of flexible rubber and steel cord. During normal operation (including crosswind and turns) your tires operate with static friction between the road and surface. Exceptions would be skidding to a stop or "peeling out". When the car is moving, it is easier to steer because the tire can flex and recover, flex and recover as it travels around and around. If you have ever tried to turn a steering wheel (without power-steering) when a car is stationary, it is quite difficult because you are dragging the rubber across the surface as opposed to the "flex and recover" mode of operation when it is rolling. This is the reason the car doesn't steer itself or move horizontally when it is parked.

Side slip is caused by any horizontal force on the tire during rotation. The image below shows how the front tires flex in a turn. This is very similar to how the tires would flex during crosswind loading.


Here is another image showing side slip with the surface contact patch. 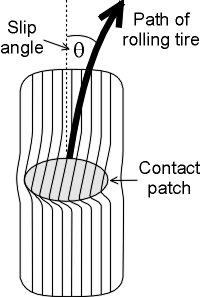 A secondary cause is that the crosswind force and "caster" in the front wheels causes the vehicle to want to turn away from the crosswind. Castor essentially means the pivot point is placed ahead of the place the wheel contacts the surface. Some castor in automobile design is desirable because it makes the steering self correcting. This is responsible for the feedback force you feel in the steering wheel during a crosswind. The drivers steering wheel torque input is required to oppose this crosswind force or the car will quickly drift off the road.

This may be easier to visualize on a shopping cart. While you push a shopping cart, a person pushes it to the left causing a moment on the two front caster wheels rotating them in to turn in the direction the force was applied. After the force leaves the wheels will realign with the single force pushing them forward. 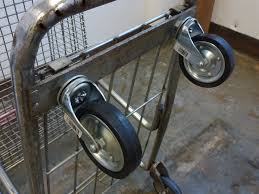 When cars are designed, the engineers calculate various things such as centre of gravity, turning circle radius etc.

One of these things is the centre of pressure and the effect it has on the handling.

The wind is a force acting on the vehicle - same as a steering input or the effect of a side slope or camber on the road.

If the wind is hitting the vehicle from directly in front it may not affect the direction so much but it will slow it down so needing more power to keep a constant speed. Have you ever ridden a bicycle with the wind in front of you then behind you?

The effects of a strong side wind can not only cause a change of direction (even noticed when you overtake a truck as it shields you from the wind ), but it can cause some vehicles to tip over.

Not the answer you're looking for? Browse other questions tagged mechanical-engineering automotive-engineering applied-mechanics dynamics or ask your own question.

3
"Bicycle model" in vehicle dynamics
1
How does friction help a car to turn?
0
Dry steering in cars
1
Why can't energy be entirely recovered from a moving car's rotating wheels?
2
Ackerman steering
1
Trajectory of the center of mass of a vehicle
3
How is rack and pinion steering configured for different wheel/axle spacing?
0
Rover Steering Torque