What controls the gain in a BJT amplifier, and why does this circuit have a gain of unity? 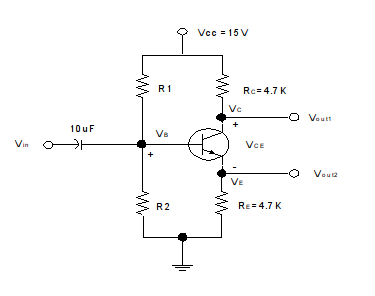 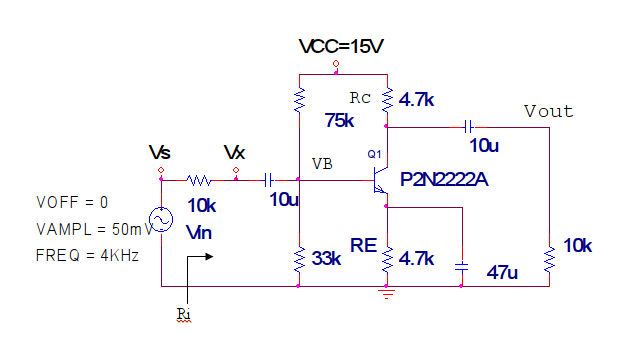 In the case of the second circuit, the ratio between the input voltage Vs and the voltage at the output Vout is around 30.

My understanding of the circuit (please correct me if this is incorrect):

Assuming the following: a beta (Ic/Ib) of around 250, R1 of 75k and R2 of 33k for both circuits, and an input voltage Vin of 4 volts peak to peak with a frequency of 1khz for the first circuit,

What controls the voltage gain in circuit 1 and 2 at the collector, and why is the gain in the first circuit only 1?

So now the question comes down to why the magnitude of either gain is 1. This can be answered by looking at the emitter voltage relative to the base voltage. At first approximation, the B-E voltage is fixed, usually around 700 mV for silicon BJTs in their active useful range. Since gain is about how much changes are amplified, the fixed B-E offset doesn't matter. AC-wise, the emitter voltage is the same as the base voltage.

Note that the input capacitor is proof that this circuit is not intended to work at DC. That capacitor specifically blocks DC, and only passes frequencies above some rolloff. Basically, the capacitor forms a high pass filter against the impedance of R1, R2, and the apparent impedance looking into the base.

This circuit is often used with an serial R-C network between the two outputs. The middle point between the R-C added become then a phase shifting network (0 to 180 degrees theoritical)

3
What does this Logic Circuit do?
5
Did I wire these solar panels correctly?
2
Why does collector current increase with base current in BJT?
1
Designing RLC circuits at specific frequencies for teaching use
1
AC voltage b/w DC power supply o/p and Ground
3
Arduino DAC to Speaker
0
Electrostatic wand to attract pet hair