System curve for use in determining pump operating point

Imagine if you were pumping through a single pipe. That's all the pump does, is take in water from a source and pumps it along a very long length of pipe. Since this is just plain piping, the friction loss isn't difficult to determine, but you need to know the velocity to calculate the Reynolds number. Without it, you can't use a Moody Chart to calculate a friction factor to find out the loss. But, with a good estimate of the flow rate, the estimated range of the flow rate could be guessed at, and a friction factor can be guessed. With a friction factor estimate, but a flow rate unknown, you finally settle on the pressure loss across this long length of pipe:

Where P is pressure, Q is the flow rate, $\rho$ is the density, L is pipe length, D is diameter, and $f_D$ is the friction factor. Let's take cast iron 100mm pipe, highly turbulent regime, running for 10km. Plugging all the numbers in this theoretical situation, we come to (hypothetically):

Now we have a formula to give an idea for pump sizing! More importantly, we have a curve. Plugging in any arbitrary value of Q (in L/s) would give you the pressure loss across the pipe in kPa. This curve is the system curve, and it naturally looks like a parabola. This is, in general, true for all fluid systems without any type of controls response (acting under natural behavior). You can plot this curve on top of the pump curve, and find out where the system will reach equilibrium.

Note, it isn't hard with such a simple system to get a lot of liquid out. More complex system have a lot more intricate mechanics, but the general parabola rule still applies. Thus, most people work through the complex mechanics of their system to simplify it into a single point. In our case, operating at 25 L/s would mean a pump that has to pump 190 kPa. This is the single operating point. Typically, many engineers will slightly increase these values, so they will always find an operating point that's safe. In this case, going to 30 L/s would mean a 275 kPa. Thus, the only parabola that goes through the point 30 L/s, 275 kPa and the origin (there is only one parabola that does this) would be the system curve.

Usually a pressure / flow characteristic curve for a given power.

They are usually provided by the manufacturer.

Unless you do an engineering degree where you get to measure the flow rate, pressure, power, calculate the efficiency etc and then have to plot all the dimensionless groups etc to show what is happening.

On the other hand, for a pump curve, you can see that the available head by the pump decreases with the increase in flow rate. So, if you put the two curves on a single plot (and if the pump is properly selected), you will have an intersection point between the two curves, and that's your operating point. 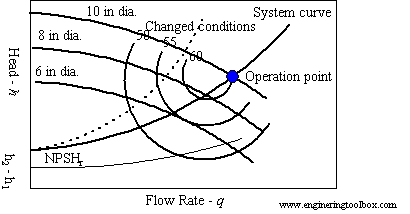 Not the answer you're looking for? Browse other questions tagged mechanical-engineering fluid-mechanics pumps or ask your own question.

3
Flow metrics of water at 12 bar through a 6" diameter open ended pipe 100 ft long
3
Would too small tubing reduce the max head of a pump?
1
What happens when pumps are blocked off?
0
Pump Characteristic Curve

8
Motor for a hydraulic pump in a hydraulic system
4
Method for determining pump characteristics
1
What type of positive displacement pump is used for vacuum liquid extraction?
0
Calculating NPSHa for a pump
0
Pump Characteristic Curve
1
Determining Pump Dead Head Pressure and Pump Curve
0
How is the ideal Euler line on a pump curve derived?