This is a theoretical question. It is known that in "classic" vibration analysis natural frequencies can be found by solving an eigenvalue problem, from the undampened vibration equation like

where $\mathbf{u}$ is the displacement vector. But, with reference to this situation 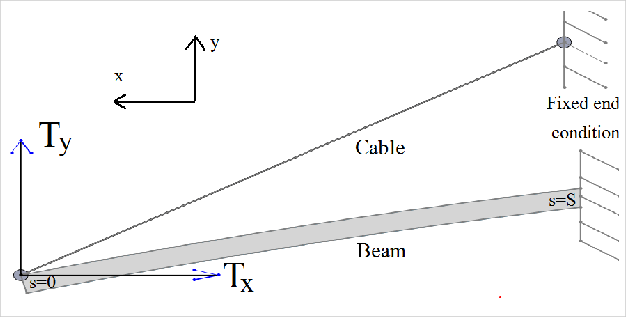 I started to wonder if this type of analysis is not correct here because $\mathbf{K}$ (stiffness) of the cable is not constant but $\mathbf{u}$-dependant (equal to zero when $\mathbf{u}$ is a displacement of compression).

So I would like to ask if someone could suggest me another strategy, or show why the eigenvalue analysis could be used also in this case. Thank you all.

Mathematically, an eigenvalue analysis assumes the modal displacements are infinitesimally small, so the change in stiffness in the cable caused by the vibration is a second order effect which can be ignored.

This very-small-amplitude vibration is a good place to start understanding the behaviour of the structure - for example, look at how the frequency depends on the angle of the beam to the horizontal.

Of course if you are interested in large amplitude vibrations, the change in stiffness during each cycle of oscillation can not be ignored, but the vibrations are not sinusoidal anyway. Really, you can only simulate this by a time-marching transient dynamics analysis, updating the stiffness at each time step. The stiffness will vary along the length of the cable because its self weight will cause the tension to change along its length, and also because it is not straight!

In simple situations (for example oscillations of a simple pendulum) you can investigate the large amplitude behaviour analytically, but that assumes you know the deformed shape of the structure (which is trivial for a simple pendulum, because the massless string is always straight so long as it remains in tension).

You might be able to formulate the large-amplitude motion of your structure the same way as for a pendulum, if you assume the beam is rigid and the cable is massless and stretches along its length. You then will have only one degree of freedom, measured by the change in angle of the beam (or the cable) from its equilibrium position.

Even for large amplitude oscillations of a pendulum, the period is an elliptic function of the amplitude which can only be evaluated numerically (e.g. by a power series approximation). For anything more complicated, attempting an analytic solution is unlikely to give much quantitative information - though a phase-plane plot may tell you some interesting things qualitatively.

The equation you showed is an ordinary differential equation. It works for solving natural frequencies of discrete systems (ie lumped rigid masses connected by massless springs). Here you have a continuous system. You will need to set up two partial differential equations, one for the cable and one for the beam. The resulting PDE can be discretized into a system of ODEs (eg galerkin method, finite element method). Thr details of how to do this are too complicated to go into here. Suggest that you pick up a textbook on vibrations of continuous systems

Not the answer you're looking for? Browse other questions tagged vibration eigenvalue-analysis or ask your own question.

3
How to simulate the Natural Frequencies of a Planetary Gearbox?
1
What's the difference of using different state-space forms for solving eigenvalue problem?
0
Undamped forced vibration for a multi dof system
2
Units for vibration measurements
1
which kind of accelerometer/vibration sensor are suitable for sensing vibration of building floor caused by human foot strike?
2
Stability with eigenvalues' real part equal to zero
2
Are the modal participation factors bounded for shock response spectrum analysis?
2
Vibration following an impact