I live somewhere where it's relatively warm the entire year (around 10ºC is the coldest you'll get in some days during a normal winter).

I am dreaming of a house design that I intend to build in the near to mid-term future.

I have dogs and I want to build a room dedicated for them outside, where they'll sleep, have a shade and be protected from the rain and wind, that they can go in and out whenever they want. This room will have it's entrance from the garden only.

The point of this question is: Is there any kind of wall design I can use that will give them a clear entrance but at the same time won't allow (at least most of) the wind rage through?

My sketch is a design roughly like this, but I am not sure if this would really stop the wind from going in or not: 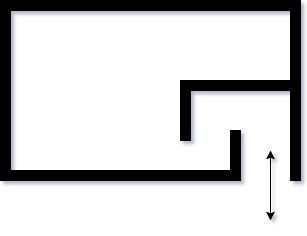 I am asking it here because I am sincerely interested in the physics of such design and how it could control the flow of the wind.

Using your posted design, one approach you can use is to have a longer entrance chamber and to have two doors (dog/pet type swinging doors): one at each end of the entrance chamber. But have the doors heavy enough so they are not affected greatly by the wind, but light enough for your dogs to pass through.

The two doors will increase the resistance to wind. Also, when one door is open the other door will be closed, minimizing the effects of any wind.

The length of the chamber should allow for both dogs to be in the chamber so that only one or neither of the doors will be open at any one time. You don't want both doors open simultaneously.

Another thing you could do is, particularly with a longer entrance chamber is to add a baffle, so the entrance chamber looks a bit like a maze. This will further increase resistance to any wind.

By the complexity of your drawing, I assume this isn't meant to be a little dog house, but an actual room-sized structure.

In this case, an important question is whether or not this room will have windows.

If the room won't have any (open) windows or other means of exchanging air between the inside and outside of the room (other than the single door shown), then you honestly don't need anything. Wind is caused by differential pressure in the atmosphere: air moves from high-pressure to low-pressure areas. If your room has only one door, the wind will cause a quick gust into the room, increasing the air pressure there until it is roughly equal to the external air pressure, meaning there will be almost no wind in the room. The same applies in conditions whether the wind would actually cause suction within the room; air would leave the room until its air pressure equalizes with the low air pressure outside. In this case, you don't really even need a door, you can just leave a "hole in the wall" for the dogs to go through. Obviously, not having any windows would make the room rather dark and, over time, it would probably get really stinky.

If it will have (open) windows or some other means of transferring air between the inside and the outside of the house (other than the door, of course), then there will be wind and you'll need to handle it. Fred's answer has some good suggestions.

Another suggestion is to study the wind's preferential direction. You'll find that wind tends to move in a given direction. For instance, near the sea (other geographic considerations notwithstanding), wind tends to move perpendicular to the shoreline (moving into the mainland or into the sea). Try to orient the doghouse with the doors and windows perpendicular to this preferential direction, so that the wind doesn't hit them directly. This will greatly reduce the effect of the wind within the doghouse. 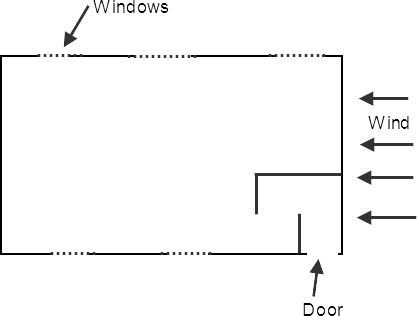 Not the answer you're looking for? Browse other questions tagged building-physics wind-tunnels or ask your own question.

0
Ventilation setup high sleeper night cooling
1
how would one calculate the % of heat not absorbed by a heat sink?