The wind behind an operating turbine is turbulent. So no, there is no straightforward formula for calculating a more realistic estimate of the wind velocity behind a turbine. The existence of such a formula is literally a million-dollar question.

However, calculating the approximate speed of the air isn't too hard: we know the energy in any given mass of air is $\frac{1}{2}mv^2$. So if we know the speed upwind of the turbine, the density of that air, and the amount of electricity generated, we can calculate the energy in the air downwind of the turbine, and thus its speed. Assume 95% efficiency for the turbine mechanics & electrics (for kinetic energy that has been harvested and is being converted to electricity), and you'll be near enough.

The study of the wakes of wind turbines is a rich and complex one, with quite a lot of work going on at the moment

Here are some wakes that nature has kindly visualised for us, at Horns Rev windfarm in Denmark (photo courtesy Vattenfall Wind Power) 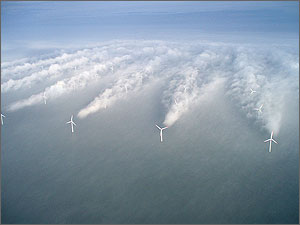 Not the answer you're looking for? Browse other questions tagged airflow turbines or ask your own question.

3
Torque in axial flow turbine
5
Identifying category of wind turbine
4
Why does my model of a wind turbine show high RPM with low power output?
3
Why not design a Wind Turbine like an Anemometer?
2
In horizontal axis wind turbines, why does axial component of absolute velocity stay constant (wake rotation theory)
0
How to calculate airflow in m3/min on a gas turbine outlet?