How can traffic signal controllers handle multiple conflicting preemption requests of equal priority without dropping one?

Let us assume that we are North American traffic engineers, and have the (hypothetical, plausible, yet pathological) intersection configuration depicted (not to scale and lacking lane lines, sorry -- I did not have time to build the model to scale or paint it!) below on our hands. Both intersecting roads are four-lane, arterial roads with an AADT of 10000, a 40' bus or tractor-semitrailer for the design vehicle, and 35mph speed limits, while both railroad tracks are signaled, mainline railway tracks with 20+ trains per day, albeit also speed-limited to 35mph through the curves due to cant and curvature. 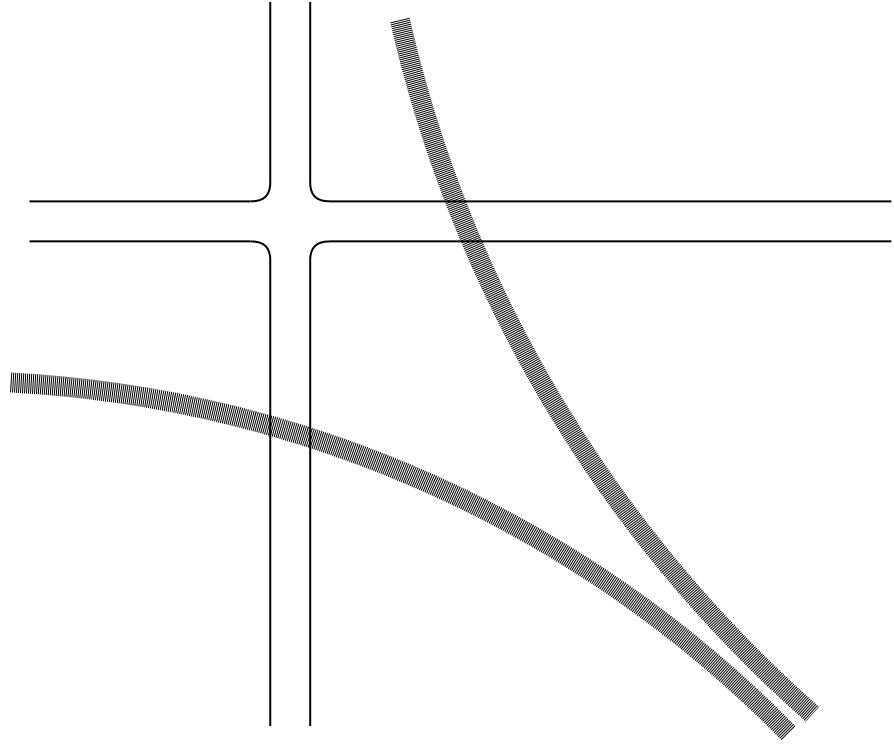 The traffic signals (not shown in the diagram) are standard 8 phase signals with pedestrian heads and leading protected left turns controlled by a NEMA TS-2, while the crossings are protected by flashing lights with cantilevers and gates controlled by grade crossing predictors. The nearest crossing (west approach leg) provides 200' of storage space, and the far crossing (south approach leg) provides 300'.

This configuration has been in service for several years after a road-widening project on the north-south road. However, a near-miss happened recently at this intersection where a car had to dart off onto the shoulder to evade an approaching train as it had queued onto the west approach crossing, so preemption is being considered for this location. But, there's a problem -- it's possible that a train move on the south crossing could preempt the intersection, then another train could show up on the other track, causing a second request for preemption before the traffic signal has finished servicing the first preemption request.

How can we handle this situation? I can see that dropping the second preempt request on the floor, which is the default behavior as I understand it of a traffic signal controller during preemption, could cause undesirable results including:

The railroads involved both are more than happy to give you all the advance preemption time you want, and are both providing 12-wire preemption interconnects to you. Furthermore, there's enough traffic here that everyone wants limited service even during a double preemption, and enough trains here that double preemption would occur every three months or so based on data logged by the GCPs.

As you might well imagine, there is a metric f-ton (the technical term :-) ) of research covering both queuing theory and prioritization analysis.

The correct, if unsatisfying answer to your title question is: there is never acase where two items have exactly equal priority, just as in American baseball there's never an exact tie between ball reaching glove and runner's foot touching bag. If your algorithm produces exact matches, then shame on you, essentially. Take a couple steps back and decide how to assign a priority earlier in the sequence,even if it involves a random assignment,so that there is never a conflict which leads to undesirable outcomes (like a crash).

Not the answer you're looking for? Browse other questions tagged rail highway-engineering traffic-intersections traffic-light or ask your own question.