I've been puzzling over a question / class of questions I'd like to solve via rough estimate before turning to CFD analysis.

With a compressible fluid, a known mass flow rate, and a set volume in the vessel, what mechanism would you use to approximate the final steady state (volume-average, we'll say) pressure in the vessel? Assume that the outlet pressure is such that the flow will choke. Assume no heat transfer to the walls and that the gas is ideal.

One solution I have thought of is to perform a dumb iterative solution:

Possibly you could do some Bernoulli-streamline-style analysis, but I'd like to also apply this sort of approximation to a multi-inlet / multi-outlet problem. This feels like some form of the Hardy Cross method might be applicable as well. Interested in anybody's suggestions. 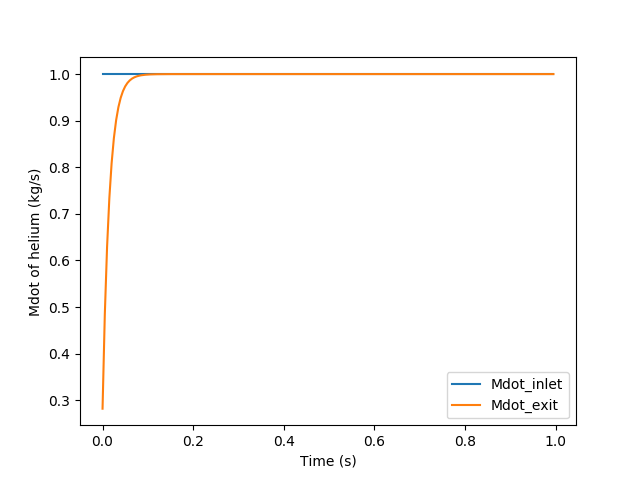 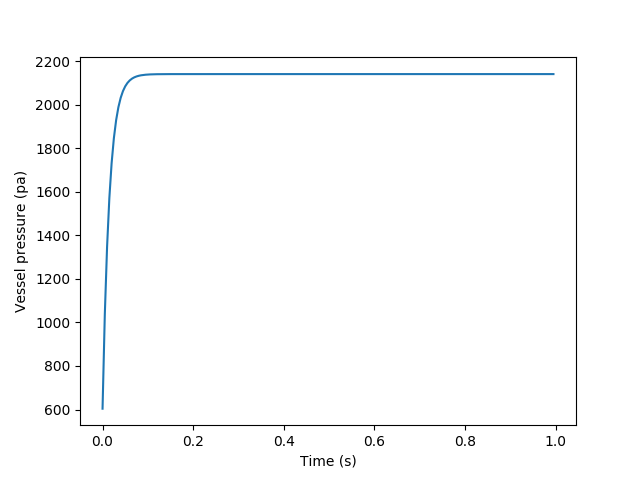 Edit: Added a few figures from my "estimation."

We model the system simply for small mass flow rates compared to the size of the vessel simply:

At point 1, the pressure can be near infinite, or the density can be near infinite, or simply the capacity may be near infinite as far as we can tell. At this point, one thing is known for certain - no matter what the mass flow regulator needs, this system has enough energy to feel the need. However the reservoir supplies it, compared to the other points, $h_1 \approx \infty$. However, since the mass flow rate is fairly small compared to the remainder, each removal of mass will keep the temperature in the reservoir fairly constant. It's fair to state that $T_1 = T$, since $V_1 \approx 0$. After all, the tank is so massive compared to the tiny amount that leaves that the tank will warm or cool the fluid compared to the amount that has left so the outside will keep $h_1$ constant.

By the dynamics of the mass flow regulator, we know that $\dot m$ mass leaves the reservoir. We don't know much about point 2, but it's very clear that $h_2 \lll h_1$. If this wasn't the case, the reservoir in question wouldn't be able to supply a consistent energy supply and mass supply through the line in question. The pressure is still completely unknown, but $P_1 \ggg P_2 > P_3 \ggg P_4$, or the fluid wouldn't leave the system at all. However, across the regulator, the tiny mass moving of the fluid compared to the size of the piping calls into question the Stanton Number of the fluid. At a high Stanton number, it can be shown that a lot of heat moves from the pipe back into the fluid, reestablishing $T_2 = T$, and bringing $h_2$ up, but less than $h_1$ since $P_2 < P_1$

As established above, the temperature of $T_2$ should be brought back to room temperature, $T$. While the energy is unknown, we are attempting to find $P_3$. Since we enter a reservoir, $V_3 \approx 0$, and the fluid stagnates. The reservoir walls may be warming the fluid inside. Since the mass flow rate is small compared to the mass of the fluid inside the reservoir during steady state situation, it can be seen the reservoir should warm the fluid until it reaches $T$. Thus, the stagnation temperature, $T_{0_3} = T$. With this temperature known, the choked flow equation can be modified to reveal $P_{3_{final}}$, since the fluid, having stagnated:

Indeed, with these assumptions, you've effectively turned the reservoir at point 3 into it's own mass flow regulator, at the price of keeping the pressure and temperature inside of the reservoir 3 constant.

Interesting question, but well worth discussion of the confusion of compressible flow equations. At steady state, we will always have the mass flow rate be constant, even with choked flow. The flow rate at the exit has to be the same as the rate going in. This seems counter intuitive - choked flow states that there is a maximum flow rate which a nozzle can produce, and no more. However, choked flow states this is the case for variance of the outlet conditions, the flow rate will not increase. It states nothing about variances on the inlet conditions. Indeed, The main idea behind choked flow is that it depends on a singularity in the differential equation (which is derived on constant mass flow rate assumption):

This situation could be resolved if more information was known about the inlet stream (such as temperature, or pressure). We couldn't use the reservoir properties as it is unknown how the mass flow meter affects the stream.

Not the answer you're looking for? Browse other questions tagged fluid-mechanics cfd or ask your own question.