Why is friction force is not considered as centripetal force?

This is a solved example in my text book"Engineering mechanics dynamics. R.C.Hibbeler" :

The 3 kg disk is attached to the end of a cord. The other end of the cord is attached to a ball and socket joint located at the center of the platform. If the platform rotates rapidly, and the disk is placed on it and released from rest, determine the time it takes for the disk to reach a spead great enough to break the cord. The maximum tension the cord can sustain is 100 N.. And the coefficient of the kinetic friction between the disk and the platform is 0.1 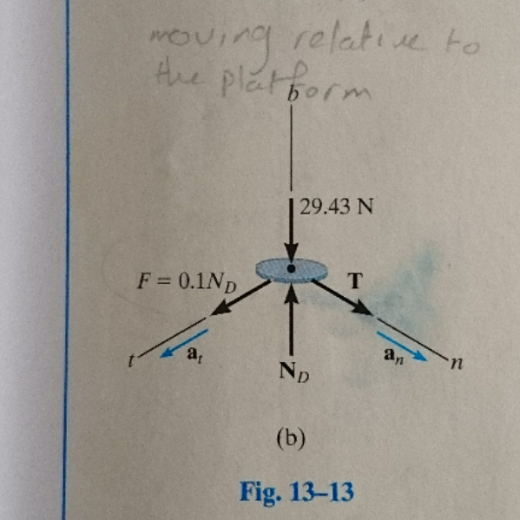 Because friction resists either a centrifugal force or a centripetal force - ie friction opposes any motion.

Not the answer you're looking for? Browse other questions tagged mechanical-engineering dynamics or ask your own question.

1
Can the hysteresis phenomenon be considered as a (type of) friction
3
Friction clutch and the force required
0
Damped harmonic motion with dry friction
2
Linearly Damped Harmonic Motion with Sliding Friction
0
Why is there still no truly omnidirectional treadmill? (technical reasons)
1
Torque required to rotate object around axis using Stepper Motor for Kinetic Machine
0
Determining Friction and Contact forces
0
If aboard a train being driven along a track by centripetal force, would it feel like you were on a regular straight track?