I have a non-linear system shown:-

How do I determine the region in the state plane where the equilibrium state at the origin is asymptotically stable?

As you might already know your system is nonlinear, which means that it is not trivial at all. See below for the plot of the system. The linearization around $(0,0)$ gives you the information that the eigenvalues have both negative real parts, which guarantees asymptotic stability in the sense of Lyapunov for the origin. From the plot, one can conjuncture a half-stable limit cycle. Which would imply that trivial equilibrium solution is stable inside the half-stable limit cycle. I doubt that you will be able to get the exact equation for the limit cylce.

In order to estimate the region of asymptotic stability, you could try to come up with a Lyapunov function, which is also not trivial. Alternative methods would be to use the index theory / Bendixson–Dulac theorem / Poincaré–Bendixson theorem (for the existence of the limit cycle), Method of harmonic balance / Poincaré-Lindstedt method / Multiple Scales to find an approximate equation to the limit cycle. Multiple Scales also allows you to investigate the stability of the limt cycle. 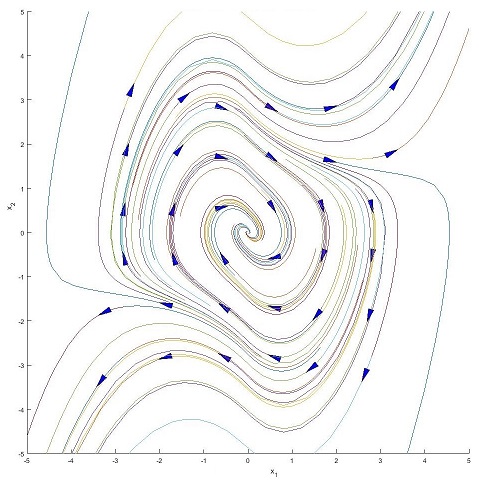 4
How can I check whether a nonlinear system is zero-state observable?
2
From Single to Multiple Input (from SISO to MISO)
0
Nonlinear observer of an unknown variation state
1
Simulating a mass - spring - damper system
1
Bounds to prove exponential stablity for given Lyapunov function
2
How do I determine the output equation in the state-space representation?