What does “tempered water” exactly mean and how does it help cool the air?

It's from Apple's latest Earth Day commerical called “Can a building breathe”. https://www.youtube.com/watch?v=tNzCrRmrtvE

The commercial is about Apple's new naturally ventilated building called "Apple Park". It says "We run chilled water tubing through that concrete mass, and then we use outside air to be our dominant cooling system, and you're using very little energy to get the tempered water to do this. So it's a breathing building." 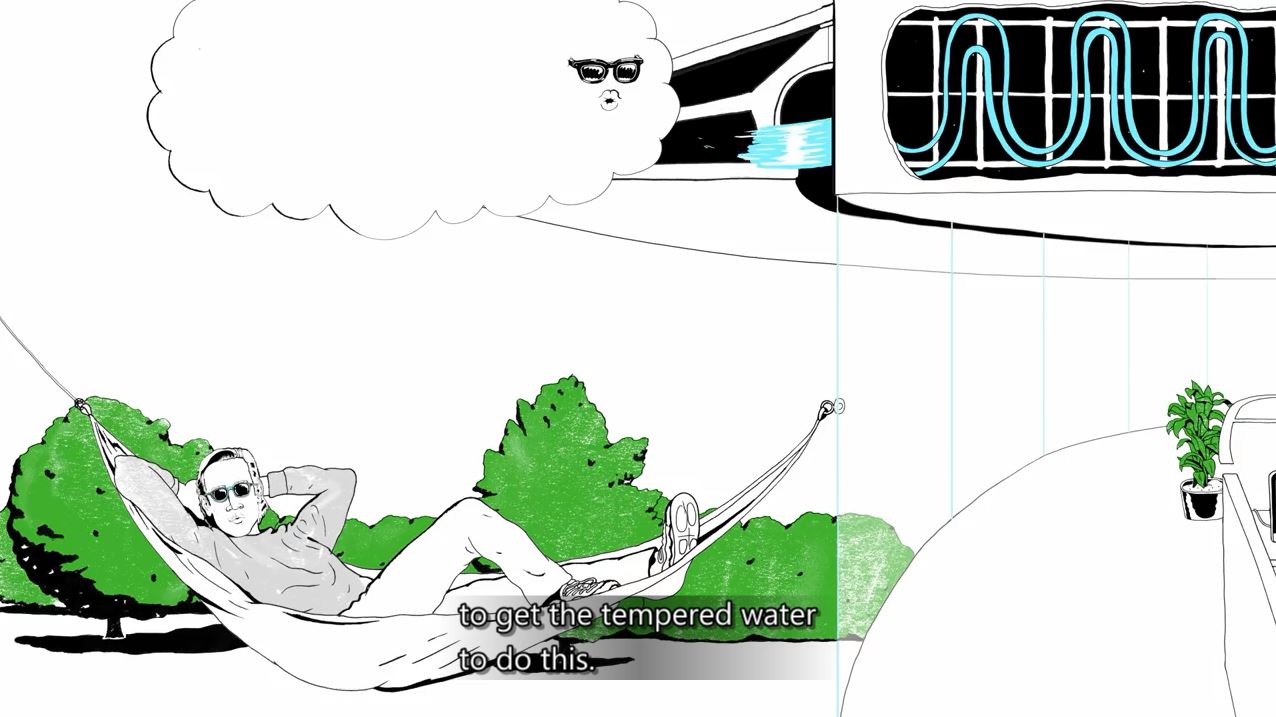 Tempered water must be exactly at a temperature where in an emergency a person could use it immediately. For example, if a person was on fire, or had spilled acid on themselves. In the middle of winter a person would head to the safety shower if there was no fire extinguisher/acid spill kit close by. In winter, depending on location, this water would be near freezing. Enough to give anyone hypothermia and put them into shock (which has happened). Thus, tempered water is always around 22 $^\circ$C to 25 $^\circ$C (72-77 $^\circ$F) to prevent people from either getting cold too fast or burning themselves with scalding hot water. This is far different from what Apple is using it for, but that is technically the scientific term for tempered water.

Furthermore, they even say right in the ad that they are using "chilled" water. From my experience, they are referring to two different concepts in the same sentence. On a related note, they may not be spending money on refrigerant systems, but you still have to cool the water somehow. It may be a net gain for their energy calculation by using the water over a refrigerant based system, but if they are not also using some sort of energy recovery system and are just blowing outside air through the system, they have probably negated any gains they made.

2015 International Plumbing Code, and prior editions, definition: TEMPERED WATER. Water having a temperature range between 85°F (29°C) and 110°F (43°C). This agrees with other codes and previously mentioned standards.

Since water does not usually occur naturally in those temperature ranges, and I'm talking only about water used for human consumption and in buildings (obviously we see water, steam, & ice in a huge range of temps naturally; but we aren't pulling our water supply from geysers or ice pipes), common usage of tempered means water that has been heated or cooled for a specific use or equipment (and it doesn't have to be between 85-110, it just commonly is), as it usually is supplied by utility companies or wells at about 55-degrees Fahrenheit, give or take 5 degrees maybe. This can be domestic water used for drinking or touching humans (including toilets, sinks, showers, faucets, etc.) or hydronic water used within systems for equipment or comfort (heated water system, cooled water system, chilled water).

Heated water hydronics can go as high as 180-200 degrees (steam is obviously higher/much higher, but that's a change of state), kitchens/cleaning usually use 140 degree - up to 168 degrees (my regular 'ole home dishwasher even heats water to 163-168), domestic systems by code cannot exceed 140 degrees, though we use mixing valves to get that down further to 110-120 degrees, schools for young kids temper down to 95-110 degrees in the hot pipe (kids are less careful with stuff), hot tubs at 104 degrees, give or take, etc.

On a hot day you probably want your water at 34 degrees (many beer brands are best at 34, but some better or different quality beers should be served at temps. a bit higher) but your stomach likes water right at 98.6 degrees... And 60 degree water can feel very cold.

Chilled, cold hydronic water can be anywhere from 33 degrees to much higher although we usually see systems are designed for water 45-65 degrees to do their job of pulling heat out of the air or off equipment. For colder temps, either in the environment or for cooling equipment, we use water/refrigerant mixes. And remember: there's no such thing as cold, the definition of cold is the absence of heat, to some degree.

So chilled air does not equal 85 degrees!

There's all the details:

So Apple is correct that they are modifying the temperature (tempering) of air/water to do a job. And they are correct the methods they are using are naturally occurring, very energy efficient (think geothermal fields), and effective (btw, the Hoover Dam's concrete was cooled the very same way - otherwise the Dam would have taken hundreds of years to set due to the amount of heat concrete gives off when installed; and with a concrete dam that large, it wouldn't have been usable for many lifetimes!). But they are not using 85 degree water or air to cool off people! Unless those people are just trying to be cooler than 86 degrees or higher. That's where the ad is misleading.

This is how it works: the Second Law of Thermodynamics says heat will naturally move from hotter areas to areas with less heat (colder); and the bigger the difference in temperature between the two, the faster heat will transfer!

Using chemicals in/or alone from the water at certain pressures improves performance of heat transfer and protects pipes from freezing if outdoors. And since hydronic systems are usually 99.9% closed, it's cheap to operate as you don't have to add more water or chems very often.

So to finally answer. Apple is introducing cool water through material, pipes, and/or equipment which is naturally picking up the heat being transferred, then that water moves through the loop to a cooler area, and the heat continues to transfer out. The same with air, they take cool air from some area, blow it through the working space, it naturally picks up heat, then that air is taken through a cooler area where the heat leaves again, and then they can use that same air to blow through a space again as it has lost a lot of the heat. Everything is relative!

Men like their offices at 68 degrees, women like theirs at 74. So as long as the water or air is colder or hotter (depending on if it's winter or summer) than the thing/area that needs comfort/tempering/temperature, it will feel good to us and give or take heat naturally. This is exactly how air conditioners, radiators, heaters, humidifiers, chillers, heating coils, heat exchangers, etc. work! It's all the same basic, simple process/physics but just engineered perfectly. But then some owners want the results but at a cheaper price, so then you get spaces and people that can't get comfortable, warm or cold enough. You just need somewhere to dump the heat (like a rooftop outside), and somewhere to get a cooling effect (through high pressure chemicals, underground, or normally cool water or coils), and then the equipment to supply and return the medium used.

The chilled water is used to cool the air as the air passes over the water filled tubes which would be colder than the air, thus reducing the air temperature and increasing the water temperature. This is meant to replace the traditional AC system of buildings. Tempered water likely refers to the water that is being used as the cooling fluid (which would have been refrigerated some how to get to a certain temperature) but it can't be definitively said what temperature it is at.

I think by"tempered water" , Apple means water at ambient air temperature. So they use power to run fans and pumps for ambient air/water heat exchangers. Evaporation coolers are usually more efficient but require engineering/maintenance/costs. This is effective when outside temperature is lower than inside temperature ( inside heat caused by lights, computers, people .etc.)

Not the answer you're looking for? Browse other questions tagged thermodynamics aerodynamics or ask your own question.

1
Does attic insulation help cool a building?
1
How effectively will this evaporation setup cool down the water?
1
Calculating final temperature of humid air and cool stone
3
Does adding cold water to evaporative air coolers actually produce colder air?
1
What does it mean by average kinetic energy of molecules as temperature?