Are there any variable frequency drives that work digitally?

By this I mean can any DC to AC variable frequency drives invert digitally (no moving parts) and if so how do these work? Is this possible for both sine and square wave inverters?

electrical-engineering frequency-response ac
Share
Improve this question
edited May 31 '17 at 17:02

This question is rather confused, but I'll take it as "Can AC power be produced from DC power without mechanically moving parts".

Of course. That's what devices called "inverters" do. Most inverters are designed to work at a single frequency, but they certainly don't have to be.

There is not much difference between a class D amplifier and a modern sine wave inverter (except for resonant design, beyond the scope of this answer). In the case of the inverter, the control signal is generated internally, but the power output electronics are quite similar.

Another obvious existence proof of such things are uninterruptable power supplies (UPSs). When the input power goes away, the power source is the internal battery. That is inherently DC, yet the output power is AC at a regulated frequency and amplitude.

In ye olde days, this kind of conversion was done with motor-generators. There is still a niche for those today, although that niche is small and getting smaller as power electronics advance.

Even utility-scale DC to AC conversion is done with solid state electronics nowadays. For example, here is a picture from Google Earth of such a plant in Ayer Massachusetts: 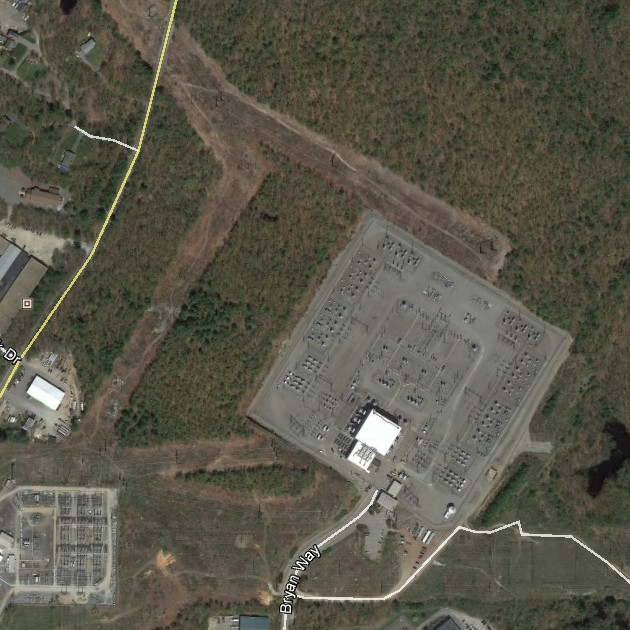 DC power lines from dams nearly 1000 miles away in northern Quebec come in at top left. The big square site at lower right converts that to AC at 60 Hz, and feeds it onto the large AC power lines shown horizontally at the bottom.

Transforming that much power at such high voltages and currents takes a large facility, but it is ultimately done with semiconductors.

Not the answer you're looking for? Browse other questions tagged electrical-engineering frequency-response ac or ask your own question.

11
How fast should I sample with a logic analyzer?
4
"Micro Inverters" vs "Pure Sine Wave" for Solar Systems
6
Is a 3 Hz beat frequency from my neighbor's HVAC a sign of a malfunction?
0
Why not skip inverters and use solar power directly as dc?
2
What (if any) are the engineering limitations for producing "simulation" exoskeletons