How is it that when the DJI Mavic Pro is unfolded, the extension and propellor locks into place?

When unfolding the DJI Mavic Pro, the extensions with propellers seem to lock into place? How is it that when it is folded, it appears to be locked into place as well? How can I replicate it?

According to the manual, this is how the extensions move:

I don't know precisely which type of hinge they used, but it's probably follows the same general concept as this one used for folding tables: 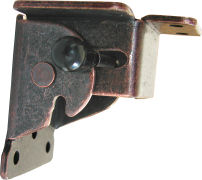 The hinge is slotted, so once the extension reaches a certain point, it "falls" into the slot and can't rotate back to its original location (unless the tabletop is raised, removing it from the slot).

There are many variations on this design, of course. Some have "buttons" which can be pressed to release the lock, for example. But the overall concept behind them (at a certain point, something mechanically impedes further motion) is the same.

3
Precise rotational movement and locking
12
Can a magnetic lock be negated or overcome by a stronger electromagnet?
5
How to transfer rotational energy into lateral energy only when rotating one way?
3
How do you apply fits and tolerances when designing hole and shaft?
3
Stability issues in gateleg table design
2
Do linear actuators need to stay powered once in place? If not, how can I lock them?
3
How does the central lock mechanism in articulated arm (magic arm) works?
5
Make something that turns yet locked in place
0
shifting weights and locking in place at different angles