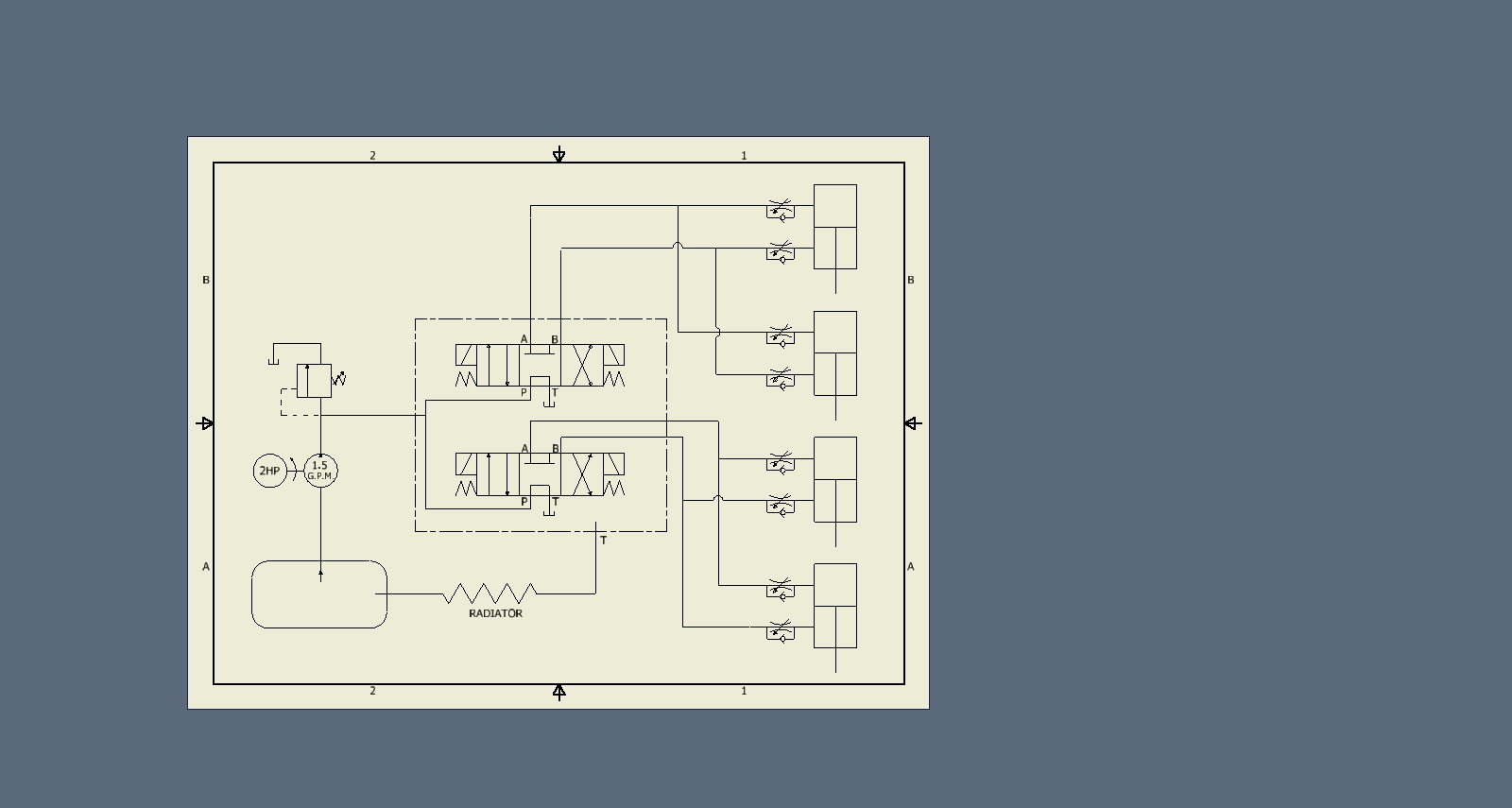 I'm having a weird issue with some solenoid valves in a simple hydraulic circuit, let me try and describe the situation as best as I could..

So coming out of a 2 station manifold, I have 2, 4 way, spring return, center drain valves. 120VAC, controlled through relay outputs by a PLC. Each valve controls a set of cylinders, A position down, B position up. Wired up such that 1 leg of each coil jumped together to my 120VAC control, the other 4 legs to their corresponding PLC output.

Initially, I had valves with a center position, A&B drain to T, P blocked. Everything worked correctly from a controls standpoint, only problem was when both valves were "off", I was holding at full pressure (~1700 psi)and building up alot of heat.

So I swapped out the valves for center position, A to B blocked, P drain to T. Wired up exactly the same as before. Now when I actuate, lets say, valve 1, side A, nothing happens...until I actuate valve 2 side A, then cylinder on valve 1 actuates, as well as the cylinder on valve 2. Electrically everything is right when I check with a meter, program is running as it should as well. So that leads me to believe that somethings going on hydraulically.

Anyone have any idea whats going on? It seems like when I have one valve, P going to A and the other "off" (P to T) that I might have to much pressure going to tank, preventing B to T thus keeping my cylinder from moving?

Let's assume that's the issue, how can I modify my design to remedy the problem? Im thinking, change from one, 2 station manifold to 2, independent station blocks and add check valves to the T outputs to prevent pressure from backing into the T line and preventing the oil from draining from the exhaust of the cylinder.

A "dump" or relief valve was added to the circuit, right before the solenoid manifold, plumbed into the tank line, right before the radiator. In the instances when the pump is running, but the machine/solenoid valves are not operating, the dump valve is opened, draining all pressure to tank through radiator.

1) Connect the T output from one valve to the P input of the other valve. The fluid can return to the tank easily when both valves are in the center position, but both valves will receive pressure from the pump. The pressure and volume going to the second valve will not be constant when the valve that is first in line is being switched, but both will still work.

2) I have seen this approach, but I don't know the exact circuit. Go back to your earlier approach, and add a pressure sensing pilot controlled relief valve that opens the return path to the tank whenever neither of your control valves is drawing fluid. So your full 1700 psi drops to some much lower pressure to reduce heat when the pressure is not being drawn by either valve.

Not the answer you're looking for? Browse other questions tagged mechanical-engineering hydraulics or ask your own question.