How is the detailing of the intersection between two RC beams perpendicular to each other?

In the below picture I want to design B4 and B6 but I am not sure which one does support the other and how the detailing of the area of intersection between these two beams?

Is it better that B6 supports B4 because B6 have the shortest span? 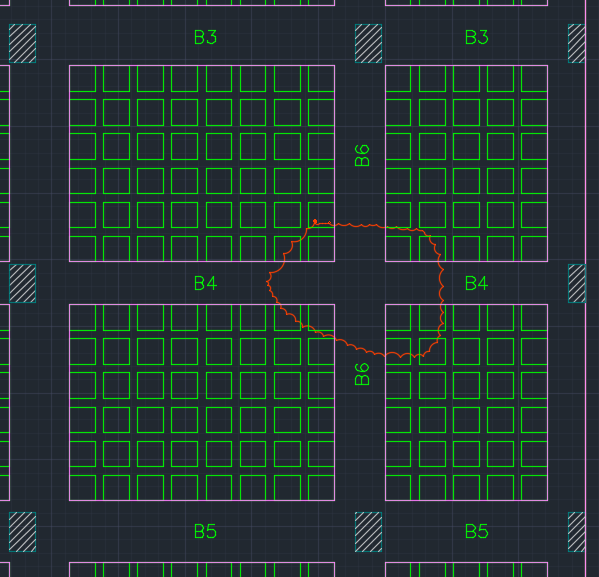 You decide which beam supports which by how you detail the steel reinforcement at the intersection.

Usually, one chooses to make the stiffest beam support the other. In your case, that means that yes, B6 would support B4. However, that decision isn't taken merely by looking at the beams' spans, but also at their $EI$. Since they seem to be of same (or very similar) cross-section, then the difference in span becomes the only relevant variable. However, if B6 were actually half as wide (or tall, which would be even worse), then it would probably be far less stiff than B4, in which case one'd define that B4 supports B6.

If you prefer, you can also let an analytical model make that decision for you. Look at the shear diagrams of both beams at the intersection. It should be clear that one "lost" shear force and the other "gained" it, meaning the latter is supporting the former.

Now, once you've defined which beam supports which (in this case, B6 supports B4), we need to inform our decision to the universe by detailing that intersection accordingly.

It is not merely a matter of which beam's rebar goes beneath the other's. After all, it is common to assume that reinforced concrete transmits its load from the bottom of the beam, at the end of the compression strut: 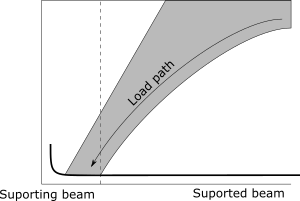 6
Why the design of continuous beam is always more economical than beam with supports?
1
Two storey brick building without using wood or steel
2
Do we need to check punching shear when a drop beam is connecting columns?
1
How the connection is between a Hollow core slab and an embedded beam?
4
Can secondary beams be supported to columns occaisionally?
0
How to get corrugated plastic roofing strips to span 3m for rainwater exclusion experiment without building additional ground supports?
0
Drop Panel Design Above Columns?
0
Maximum I-beam girder S12x31.8 span