Why do train cars have unevenly spaced axles? 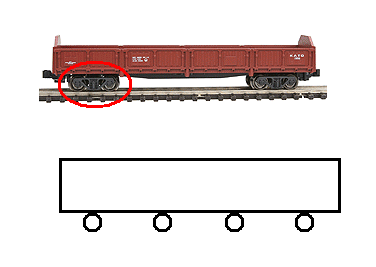 Every train car I can remember has its axles arranged like the photo. Two are put very close together in one chassey, and two more the same way at the other end.

But why do that? If you want 4 axles, isn't it better to spread them out evenly like I drew? Or if you just want axles at the ends, why not just have 2 total instead of 4 unevenly spaced ones?

So why are there unevenly spaced axles? If you want only 2 pivot points, why not just have 2 axles total (which would be spread evenly if they are equal distances from the ends of the car)? If you want 4 axles (presumably for load bearing), why not spread the axles evenly?

I could not find this answer via googling. It might help if I knew the exact terminology of that chassey holding two axles.

If you spread them out evenly then taking curves is more difficult - it's the turning circle : as the carriage goes round a curve the axles in the middle will need to move sideways in your diagram.

Bogies. Each par of axles is on a small articulated platform, which can self steer, and helps smooth out bumps.

When a wheel hits a bump. the other one dips, both their springs share the load. The central pivot point halfway between them doesn't move much, giving a very smooth ride.

It is all about the turning radius of the train. To understand it you must look from above. Scroll down a bit on the link below to see a model train on a curving track. If there were wheels in the center then they would have to slide way off center when the train is rounding a sharp bend or turning onto a siding.

The wheels are positioned close to the coupling between trains to allow for the curving track. If you look closely at modern trains they have reduced the number of wheel trucks by pivoting 2 rail cars on one wheel truck. If you look closely there are 6 axles on this section (yes I realize this is lego but it's the best I could find). There are 2 axles at the front and back, but only 2 instead of 4 between the cars. I have seen groupings like this that were 5 or 6 cars long, reducing the weight of the train by one whole 2 axle wheel truck assembly for each car.

The best kind of structure for riding along rails is a pair of axles that are held parallel to each other, and are separated by a distance roughly comparable to the space between the rails. While a single rigid axle containing two conical wheels would self-steer to follow curves if the rails were uniform and free of defects, it wouldn't take much of a defect to knock an axle sufficiently far away from perpendicular to the rails that one or both wheels would cease to be supported by the rails. If there are two axles that are held parallel to each other, and the distance between them is much smaller than any turning radius, such a thing can't happen absent some truly gross defects in the rails.

One could design rail cars with two rigid axles. Such cars were and still are used in Europe. The distance between axles, however, must be small relative to the minimum turning radius the cars will have to traverse, and consequently rail cars that only have two axles will need to be short enough that the portions of the rails near the front wheels are close to parallel with those near the back wheels. Otherwise, if the rails aren't parallel to each other, there would be no way for them to be perpendicular to both axles.

Longer rail cars are constructed with a pair of bogeys that will each ride the rails in the same way as would a very short two-axle rail car. The body of the car is then connected to the center of each bogey. Although the body of the car will of course have considerable mass an inertia, it will not prevent the two bogeys from following the tracks the same way as they would if they were independent vehicles.

The fact that rail cars have four axles is not generally necessitated by the need to distribute the load, but rather by the need to ensure that each axle is held parallel to another axle which is close enough that the portions of the rails near each axle will be nearly parallel. Unless it is necessary to ensure that a very heavy load is spread out e.g. between bridge trestles, increasing the space between the axles on a bogey would make it work less well, without offering any compensating advantage.

21
Why would a train automatically derail if a signal is passed at danger?
6
For train track, why does the ballast need "good drainage"?
8
Why do some high speed trains have long noses, while others do not?
6
Monorails - why even have them?
3
Why do trains not have a high-friction emergency braking system?
2
Why are tank cars cylindrical?
32
Why are railroad tank cars bent in the middle?
17
Why are train brakes so complicated?