What is the opposite of "parallel" in engineering?

The two towers of the Verrazano Bridge are not parallel: they are [???] to account for the curvature of the earth. 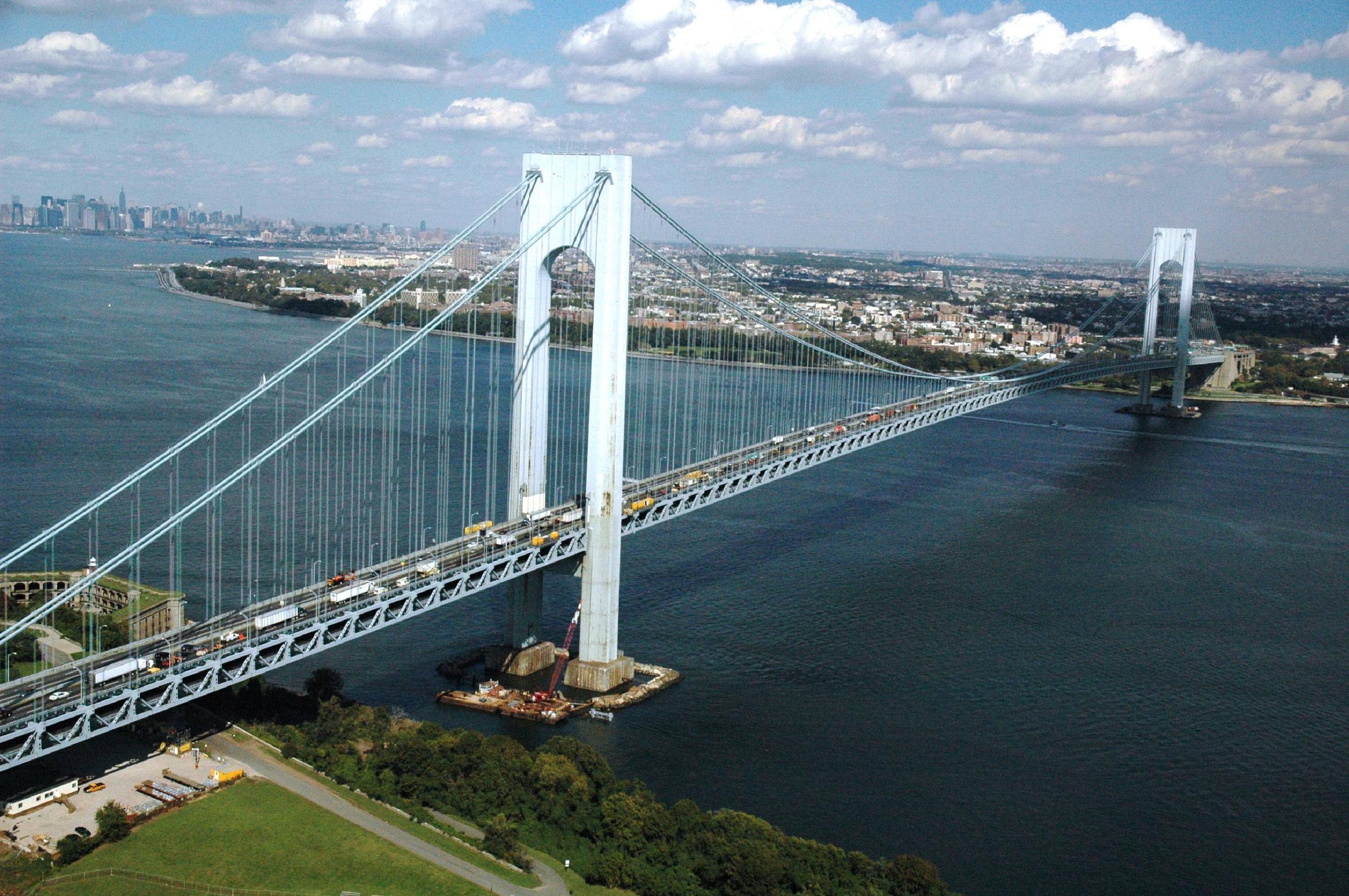 What is that word?

angled, divergent, splayed... I'd probably go with angled depending how I was phrasing the description.

In general, we can distinguish four cases.

Summary: Depending on your accuracy you would call the pillars by the following categories.

There is just no way to describe a three-way relationship with just two of the three parts.

Orthogonal to imaginary surface of Earth.

Radial from the center of the earth?

Sorry I am only answering the title of your question, but this answer does not allow to go on and give you a recommendation for your second question (in the question body).

There is no "opposite" to parallel, in engineering, in physics, or even in mathematics or phylosophy.

Not what you wanted to hear but bear with me. The notion of opposite is only ever defined on a 1D domain. On a 1D domain (a line). If a word indicate a direction along this line, then a word can exist to describe the opposite direction.

Now take a 2D domain (let's start with a circle for now, but your non-parallel lines will fit there too). On the previous line, I only had 2 possible directions, each opposite to each other, where I could navigate. Now starting from the center, there is an infinity of possible direction I can take (I can divide them in 360 degrees, 6.28 radian or any other metrics but the important thing is in any case there are more than 2 directions).

If the english language had defined a word exactly describing "anything NOT parallel", you'd have the strongest candidate for the opposite but even then it wouldn't exactly be true. One word would define a single point of the domain (of all the possible orientations) and the other would include the rest of the set (all the infinity of other possible orientations). I don't know if such an unbalance between 2 words would qualify them to be opposite. I am not aware of such a word anyway (bar "non-parallel" if you consider that a word) ...

That was the pedantic view. Now as an engineer, I sometimes use verbal shortcuts too, and in this context (as a verbal shortcut, knowingly not accurate but understandable enough for my interlocutors if provided in the right context ) I could see myself replying to "we need these things parallel for reason xx ..." with "No it's the opposite, we need them perpendicular/othogonal for reason zzz ...". It would obviously be a gross misuse of language, but with context it may be understood fine because parallel and orthogonal are special orientations among the domain, with special properties that other angled orientation do not have. (and some of these properties between parallel and orthogonal could be considered opposite, although even that would require a bit of handwaving)

Last one: As said in comment, the premise of the question might even be unfounded. IF these 2 pillars are each exactly parallel to their local gravitation field, then they are parallel to each other in the spacetime. Only earth gravity is warping the spacetime in which they reside so they appear at an angle (yeah I thought "at an angle" is better than "non-parallel", still don't have a good word for you I'm affraid).

From An Introduction to Fluid Mechanics By Chung Fang

Not the answer you're looking for? Browse other questions tagged terminology or ask your own question.

2
How to describe the rotation of opposite ends of a body due to an applied moment
3
What tool does one use to inspect pipe bevel angles?
0
What is the etymology of "bridge cam gauge"?
0
What do I call this shaft that drives the rubber stopper into the glass vial in a vial stoppering machine?
0
Describing values as being 'assumptions' or 'assumed' - what is the correct approach in academic papers for civil engineering?
0
How do you name rods to fix several parallel metallical plates in mechanical devices?
2
What is a "typical" in the context of control engineering?
0
What does the word rectiplanar mean?