What casued periodic waviness in the sidewalls of this tunnel?

It looks like the digging of this ISIL tunnel introduced periodic waviness in the sidewalls of the tunnel. Similar (related?) waviness can sometimes be observed on dirt roads. What is the origin of that periodic waviness? 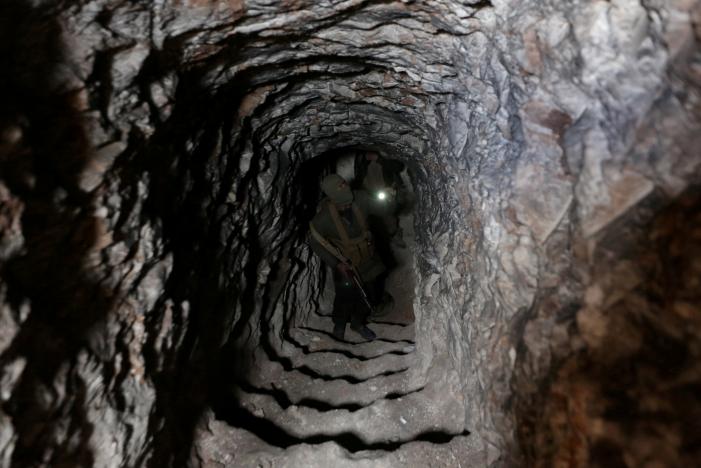 The most likely explanation for the waviness pattern is improper drilling and blasting practices leaving toe (the ridges) behind, particularly in the floor of the tunnel. In some case the ridging of the toe continues up the walls. It looks like the bottom row of blast holes (the lifters) weren't low enough & they weren't angled downwards.

From the height & width of the tunnel, the most likely method of drilling would have been to use a jack leg (also known as an air leg) drill, similar to the one pictured below. Such drills are pneumatically operated. They can be powered using common air compressors, with holes linking the jack leg drill to the air compressor.

Compressed air not only provides power for the drill itself, but also extends the telescopic leg which continually forces the drill and drill steel into the rock face as drilling advances.

This is relatively easy to do for holes bored into the rock face from waist height upwards. Below waist height the telescopic jack leg can have difficultly getting a good enough grip to provide the force required to keep the drill steel drilling efficiently.

The bottom row of holes, technically referred to as the lifter holes, need to be drilled as close to the bottom of the face (tunnel heading) as possible – preferably in the corner of the face and the floor. For this to happen, the jack leg drill needs to be placed horizontally on the floor of the tunnel.

From the height of the ridges left in the floor of the tunnel I am speculating the people who excavated the tunnel didn’t use a steel ladder bolted to the floor to get the lifter holes in the correct location.

I am also assuming that ammonium nitrate fuel oil (ANFO) was used as the main explosive for blasting. With the correct equipment it can be easily made.

Technically, ANFO is a blasting agent, not an explosive, because it can’t be detonated using a blasting cap, it needs a high energy explosive (like dynamite or another type of “stick” explosive) to set it off.

When charging tunneling blast holes, the high energy explosive, with a blasting cap inserted, is placed in the toe of the hole (far end of the hole). ANFO is then pneumatically forced into the rest of the hole.

The highest energy part of the blast is always at the end of the drill holes. If the holes weren’t properly, or fully filled with ANFO, the collar end of the hole (at the face) may receive substantially less blast energy and this may not be enough to break the rock at the bottom of the face, thus potentially leaving a ridge in the floor.

The spacing of the ridges, in the picture, appears to be relatively uniform, which would confirm a certain length of drill steel was used in drill all the holes for each of the faces during tunnel advance.

Tunneling via drill and blast rarely produces a smooth tunnel throughout. There are always gouges throughout because of inconsistent or poor drilling and blasting practices or the nature of the rock the tunnel is being developed through.

The other thing the tunnelers didn’t do was to backfill the floor of tunnel with road base or gravel, some form of smaller rock during excavation. That would have produced a smoother floor in the tunnel.

Not the answer you're looking for? Browse other questions tagged tunnels or ask your own question.

20
Why does the Channel Tunnel enter the ground around 10 km from the coast?
0
What lining design holds better for a tunnel? Spiral lining or cylindrical lining?
6
How are tunnels dug from two endpoints joined?
0
Why do normal tunnel boring operations not use the dirt (from the boring itself) for reinforcement rather than bringing it from other sources?
0
Does tunnel lining made of cast iron tubings actually accept all the mechanical loads?
0
Have tunnel boring machines been mass produced? What are the difficulties in mass producing a tunnel boring machine?