Gear train with rack and pinion

Also, and this should perhaps be another question but I'll go ahead and ask it: If I have two separate racks separated by a distance of X, connected so that when one rack moves the other moves also, and use a pinion to drive only one rack, should I expect a decrease in the torque of the secondary rack, and if so to what degree?

In order to help ensure I get an answer to my specific question, I'd like to state upfront that I'm aware that the gear ratio of the rack is determined by the distance the rack travels relative to each rotation of the pinion.

So my question relates to whether or not the mechanical advantage created by a gear train is entirely lost if the gear train is used to drive a pinion which drives a rack, and how the torque of the rack scales when using a gear train to turn the pinion relative to the gear ratio of the rack and pinion themselves.

Anyways, a power balance argument can be used to show how the mechanical advantage depends on the gear ratio. Let’s consider a pinion driving a rack: (excuse the rough drawing) 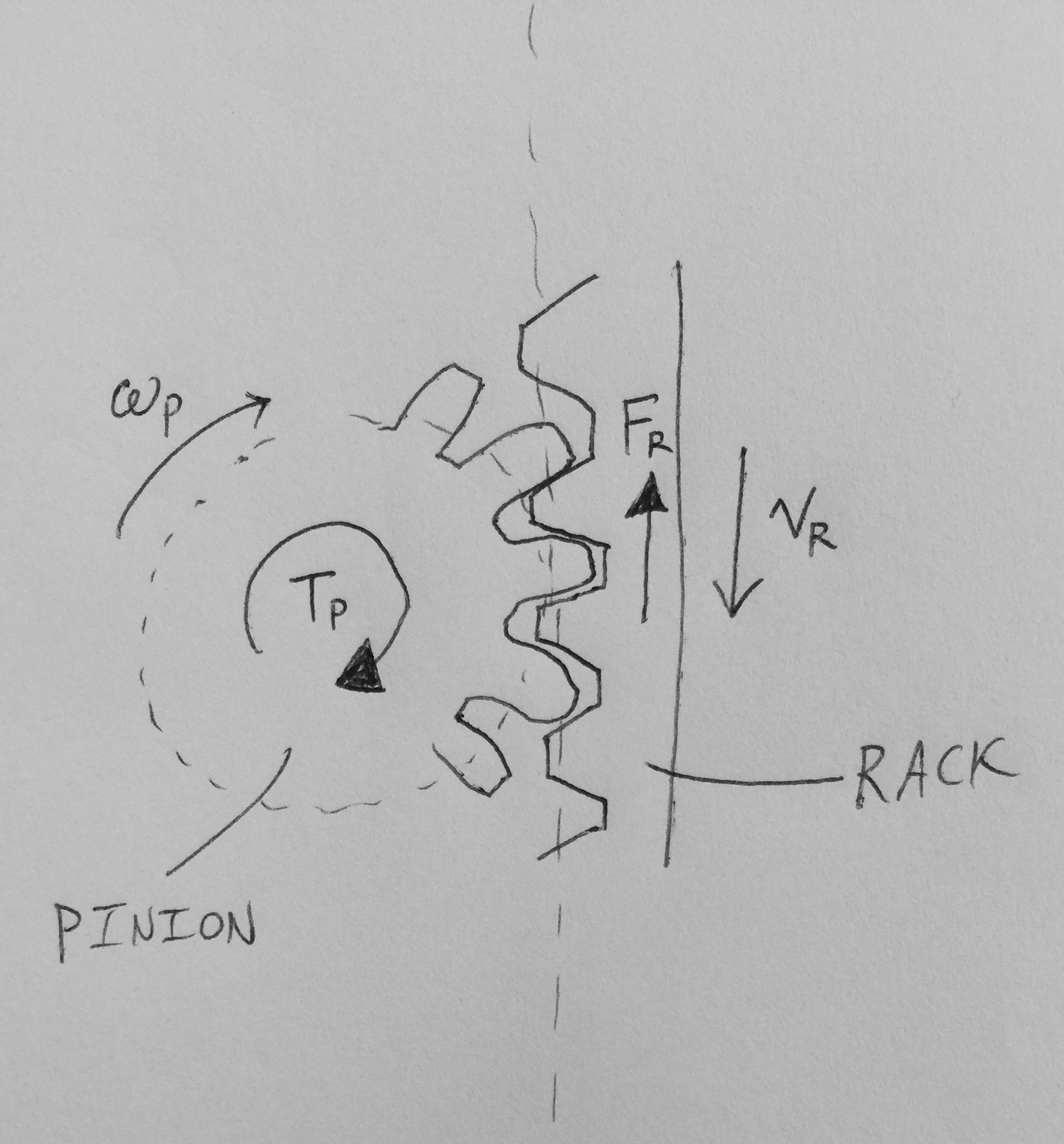 Assuming 100% efficiency, the power into the pinion is equal to the power out of the rack. That is:

Where $T_P$ is the pinion torque, $\omega_P$ the pinion angular speed, $F_R$ the rack force and $v_R$ the rack translational speed. Note how rearranging provides a relationship between mechanical advantage and gear ratio:

(Note how it is possible to derive a corresponding expression for cases with efficiency below 100% by modifying the power balance argument: $T_P \omega_P\eta = F_R v_R$)

Or, rearranging, the force on the rack is given by:

So with gear $i$ as the input to the overall system, and the rack as the output, you can see how the gear ratio $G$ of the geartrain does indeed contribute to the mechanical advantage of the pinion-rack gearset.

As for the second part of your question, I’m afraid I can’t help much without seeing any sort of diagram of the configuration of the gearing.

There is a direct correlation between any gear system input and output. The rack and pinion is just another gear. The gearing can be modeled as one gear against the rack if you do the math to make that gear an equivalent ratio to the track.

So, if you add gears to your pinion gear you will amplify torque or speed to your rack. If you use a second rack and pinion tied to the first the and the load is shared between the two you will only see a difference due to the losses of friction and normal gear transmission losses.

Not the answer you're looking for? Browse other questions tagged mechanical-engineering gears torque or ask your own question.

0
Kinematics Mechanics Find the length of the belt and the speed of the rack
0
Force limits for gear rack and pinion gear
0
How can I calculate final gear ratio when the drive train contains multiple gears with some reductions on the same shaft?
0
Rotate rack while keeping it engaged with gears
0
convert rotational movement to linear in opposing directions using worm gear
3
Reduction System for Gate-opener motor
1
If a driver gear has larger radius than a driven gear, will a larger gear ratio result in more torque supplied to the driven gear?
0
How do I interpret this DC motor datasheet?