Why is the truss member between two fixed supports zero?

If i first assume the member(far left) to not be zero and use method of joint at both points of constraint, with both constraints having unknown vertical reaction, it cannot be solved.

Load and lengths are known, horizontal reaction can be found.

In this situations, it's worth remembering Hooke's Law, which tells us that internal forces and deformations are related.

A beam can deform either because a load is directly applied to it or because one (or both) of its extremities is being deformed by a load on another beam somewhere.

If, however, a beam has no load applied directly to it and both of its ends are constrained (can't move in any direction), then it will never deform in any way shape or form. And if it doesn't deform, then we know by Hooke's Law that it won't suffer any internal forces.

That is the case for your truss: there are no loads applied to the member between both supports, and since it is between two supports, it will never deform and therefore never suffer any axial forces. And since this is a truss, any rotations suffered by the surrounding members won't be transmitted to the member either, so neither will there be any bending moment (or shear).

For the more visually inclined, imagine the deformed configuration of the structure: all the other members will be deformed as the load pulls the cantilever down. This member, however, won't be deformed at all. And therefore, neither will it suffer any internal forces. 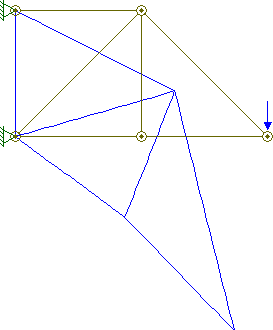 If both constrained points are pinned, the model is over-constrained and cannot be determined without more information.

If both the constrained points are fixed there can be no load on the member between because the fixed constraints take that load.

Basically, there is no load on that member because there are no forces acting on it, the same could be said for the other vertical member, unless the bottom horizontal is made of two sections and pinned, then that other vertical only serves to keep the bottom from bowing.

10
Where did I go wrong conceptually when attempting to calculate the maximum force on a truss at a given joint?
3
Does thickness impact resolving loads for an inclined beam?
1
How to find the reaction forces, moments and the displacement of the fixed beam with a link?
2
Solving truss using method of joints
0
Solar Array Frame Design / Statics Design Problem
1
Simple Fulcrum Analysis
3
Truss analysis of internal forces in members
1
Why does the method of joints not match a force balance result?