How to find tributary area for a column when I have a transfer slab?

Please if possible to show an example 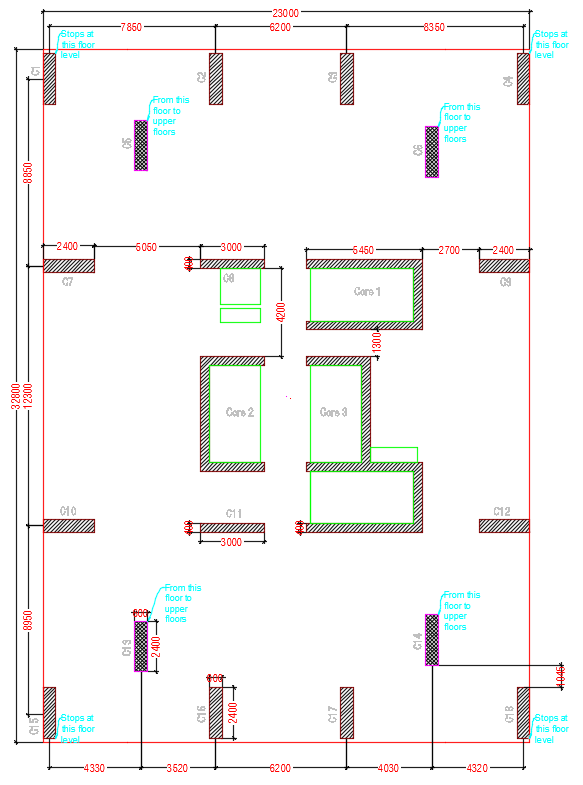 As I understand your question, you are asking how to determine how the loads from the upper floors are divided between the lower columns. For instance, column C14 is going to transmit its loads to C12, C17, C18 and the unnamed wall near the core (assuming its load-bearing). How much of the load will go to each of the columns?

Curiously enough, the answer to this question depends on the chosen foundation for your structure and whether they allow rotations (such as shallow foundations) or don't (such as multi-pile foundations).

This is a rough estimate, because the load actually isn't centered between the four columns. Also, the core wall's vertical stiffness is actually much larger than that of the other columns, so it will certainly pull in more of the load.

For a simply supported beam with a concentrated load $P$ anywhere on the span (at a distance $a$ from the left support and $b$ from the right), the reactions are equal to

Perhaps one could use something similar to better estimate the distribution of the load given that it isn't centered in the slab, but I don't know what that equation would be. It also would do nothing to solve the problem (which I believe might be significant) of the core wall's significantly larger vertical stiffness.

To solve that problem, you'd need to use a FEM program to model the structure.

The orientations of the supporting columns aren't the same. This means that their rotational stiffnesses around the x and y axes will be different: column C12 will be far more rigid than C17 and C18 for rotations around the y-axis, while C17 and C18 will be more rigid around the x-axis. And this doesn't even mention the fact that the core structure will be insanely stiff.

For instance, let's look at how the load would be distributed between C17 and C18 if it were perfectly centered between them. Each of the columns can be represented by a rotational spring which represents their rotational stiffness around the relevant axis:

The values themselves don't matter, but it is clear that the equal stiffness of the columns around the relevant axis means that the load is equally distributed between them (assuming it is centered, which it actually isn't).

Looking at the distribution between C18 and C12, however, the former will be far stiffer (I'd guess some 10 times stiffer):

C18 therefore absorbs some 50% more of the load than C12, even though the load is centered between them. The same concept applies for C17 and the core, though in this case, the core would be approximately infinitely stiff:

The core'll therefore absorb more of the load than C17.

Considering just these local effects already shows that the distribution is non-trivial. However it isn't adequate to consider the isolated structure around each of the upper columns; one must consider global effects. The edge columns will always pull less of a reaction than the central ones due to continuity effects.

For instance, let's look at how the load from C14 is distributed between C18 and C12, but remembering that there are also C4 and C9 in the distance.

The continuity effects of C4 and C9 mean that C12 absorbs 30% more load than we thought by looking at only C18 and C12 in isolation, while C12's reaction is slightly reduced.

All of this is to show that this is very non-trivial; the models I've shown here are obscenely simplified, since they look at the load distribution along a line, without taking into consideration the influence of nearby structural elements. For instance, the continuity effect from C18-C12-C9-C4 is probably even stronger, since the nearby presence of the massively stiff core will probably make the span from C12-C9 even stiffer.

The only reasonable recommendation in my opinion is to use a FEM program to model the entire structure, including the slab, at least floor-by-floor. Any "manual" method will be highly simplified and inadequate by modern standards.

The easiest way to demonstrate this difference is with another model, now actually showing the support columns and the "foundations":

In the model to the left, the pinned foundations mean that the load is equally distributed, even though the columns have different stiffnesses (but equal area). To the right, however, the fixed foundations cause the load distribution to be uneven, with more load being absorbed by the stiffer column.

This can also be seen in the difference of the deflection of the models:

The pinned supports allow the columns to rotate freely, eliminating any potential rotational stiffness. With the fixed supports, however, the columns do resist the beam's attempt to rotate the nodes.

Not the answer you're looking for? Browse other questions tagged structural-engineering columns or ask your own question.

3
How do units of mm^2/mm represent the reinforcing steel area in a slab?
6
How should one model a structural model with both line elements and area elements?
5
Where do the tributary angles/ratios for tributary areas come from?
2
Tornado Safety: Basement or first floor interior room?
2
Do we need to check punching shear when a drop beam is connecting columns?
2
How can the shear capacity of a concrete slab be determined for effective depths under 200mm? [Eurocodes]
3
Building Uplift due to water pressure
3
How does one build a waterproof basement?