How to calculate indeterminacy of pin-jointed frame?

I understand that to calculate the indeterminacy of a pin-jointed frame, the unknowns have to be considered i.e. the number of elements corresponding to the number of internal forces, plus the number of reaction forces.

The equations that can be written to solve for these unknowns are vertical and horizontal equilibrium at each node i.e. 2 equations per node.

The entire point of a "pin" connection is that it does not resist a moment. If you move two parts connected via a pin connection, the parts are supposed to move freely, but rotate relative to each other at the pin. As such, the moments are always considered 0 at a pin connection.

Let's consider classical static analysis frames from second year. These always have the loads applied directly to the pins, never on the members. As such, the moment arm is zero, and therefore the moment equation is irrelevant. Now let's consider real world analysis, when a load is applied to the middle of a member. Since the member is considered to have pinned connections, where the moment at each pin is zero, we do not need to count on other members transmitting that load. Instead, that single member that is loaded could be treated as a pinned connection beam. Once the load is resolved, the pins still have - no moments. Again, no additional equations to resolve the indeterminacy.

Note this applies only for static frames. When frames move dynamically, the members can rotate, and this rotation is caused by moments from dynamic movements in the members.

To be clear, just as you consider global bending moment for beams, you also consider it for trusses.

However, note that this is the global bending moment. Once you've calculated that once, there's no reason to calculate it again. Sure, you choose some arbitrary point $A$ from which to calculate $\sum M_A=0$, but the point chosen is completely immaterial: no matter which point you select, the result will be the same. Doing the work again for another point $B$ will grant you absolutely no new information, since both $\sum M_A=0$ and $\sum M_B=0$ are representing the exact same thing.

This is why, when calculating beams, we don't calculate the sum of moment around each support: if $\sum M_A=0$ is satisfied, and so are the global force equations $\left(\sum F_x=\sum F_y=0\right)$, then the global bending moment from the other support is guaranteed to be satisfied.

And so, just as with beams, you do need that global bending moment calculation. But you only need it once.

That's why the static determinacy equation for trusses is

For a stable and determinant truss we can say that:

Why we only have two equations per joint and not three (i.e. why we ignore moment) is largely due to the assumptions we made when dealing with a truss to begin with.

The typical assumptions are:

As a result of these assumptions, each joint represents a concurrent force system. That is, all forces pass through a common point. If we consider our handy statics potato, we can see that this mean moment equilibrium is automatically satisfied. We can only write the trivial equation ‘sum of moments = 0’. None of our unknowns of interest participate in this equation and therefore the ‘sum of the moments’ equation cannot help us solve for our member forces. Therefore we only have two equations available per joint. 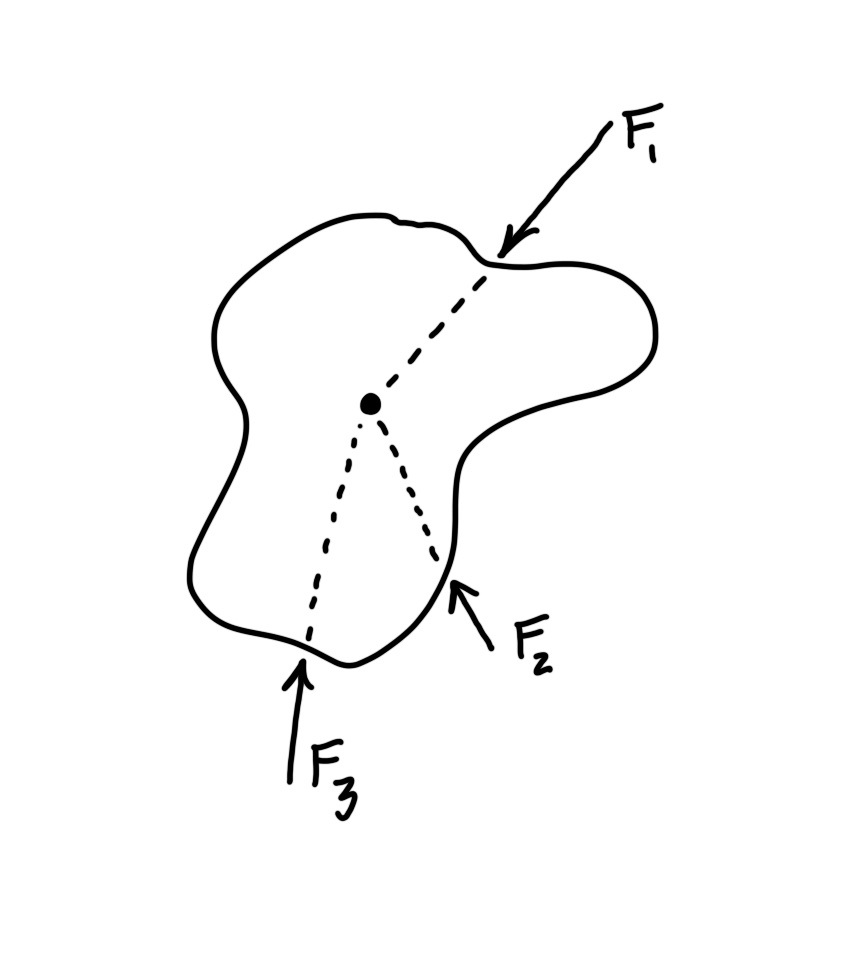 Going back to that initial equation then. When we say “determinant” all we mean is the structure under consideration can be solved with the equations of statics.

For this, we must have:

We’ve established that the number of equations we can write = 2*No. Joints. The things we want to solve for are the external reactions and the internal member forces (axial only because of our initial assumption).

3
How to calculate the forces on members of a frame, due to a distributed pressure load?
4
Statics and Structural Analysis: Determinacy in beams/frames
4
Accidental Torsion and Equivalent Static Load for an irregular structure
2
How to calculate bending of shell
1
Pin support, why is there no horizontal reaction force?
1
Question on the determinacy of frame structures