Internet is full of twisted belt examples (30, 60, 90 degrees), however, the allowed misalignment tolerances claimed by the manufacturers are less than several degrees.

The very term misalignment seems to impose the two pulleys are out of single plane.

So, would it be correct stating that?:

Apart from timing belts, are there other belt types which would enable me driving i.e. 30kW load at 30 degree belt twist? 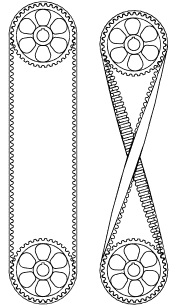 The twist introduces a sideways torque, making the belt align non-uniformly, stretch and compress non-uniformly, and rub against any stops that prevent it from falling off (or be prone to fall off in absence of such stops). This increases load and wear.

If you stick to manufacturer-specified misalignment, you can fully expect the belt's life time will be as in specifications at nominal load. If you apply the twist, the wear will progress much faster, and the load non-uniformity reduces the loads the belt will able to handle, as nominal load isn't distributed evenly throughout the whole width, but strains one edge above nominal, while leaving the other slack.

And on top of that, all that extra compression/expansion, misalignment and friction cause a significant performance loss.

Simply put, your device will still work, but belt will need to be replaced more often, and you'll need to use a belt rated for higher load than typical for this application in straight configuration.

That makes the twisted belt configuration non-optimal for main transmission; continuous operation. But if your loads and usage are occasional - e.g. driving a regulation mechanism that is pre-set for beginning of a production batch and set in place for the remainder of the batch, these disadvantages vanish completely.

Of course disadvantages of belt transmission in general, like large play, stretching under load etc remain, but the twist becomes non-issue.

Twisting the belts increases the angle of wrap, or arc of contact, that the belt has with the pulleys - ie the belt has a greater contact area with each pulley.

If the motive power and the load are great enough the twist can gain an ability to avoid tearing out ribs on the belt from continuous start/stop circumstances.

A need to reverse belt direction many times per minute or hour is another consideration.

So to is the need to transmit power 90 degrees to drive equipment on multiple levels as was done in my grandfather's broom factory. A one cylinder natural gas engine in basement of a hillside factory used ribless belting that could slip on a large drive wheel until engine speed was great enough to engage belt with a long lever to tighten slack and start to 'smoke' from slippage as central belts got up to operating speed and belt slipping stopped.