Design of transverse reinforcement in a wide beam

Besides satisfying nominal bar provision in the code, is there any special requirement in the provision of transverse reinforcement to ensure that the longitudinal reinforcement is fully effective in a wide beam design? That is, can I use the full reinforcement area (all bottom bars) to calculate the bending moment capacity of a wide RC beam, provided that all detailing and curtailment requirement is satisfied? Do I have to calculate the transverse reinforcement necessary to confine the longitudinal bars and make them fully effective? Or do I have to consider a reduction using some spread angle from edge of support? For example, in the design of a pile cap with wide pile spacing, using Eurocode or British standard.

I can't answer with reference to Eurocode or British Standards, but there is some guidance in official comments to Spanish norm EHE-08. This answer follows comments to article 42.3.1 in page 194, where the following image is taken from. 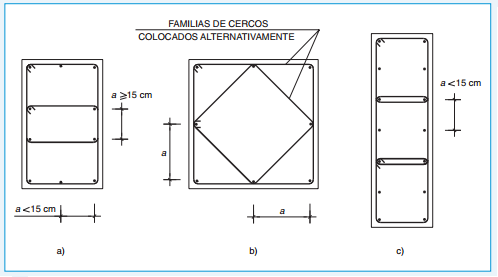 Rules are for compressed bars and aimed to prevent buckling and therefore they should only apply to the compressed face wide beams. However, bar distribution in wide beams is usually quite symmetrical and then all longitudinal bars get the same confinement.

This is a generalized answer to a question in general.

In practice, depending on floor geometry and loading pattern, special concerns may arise over the potential of "stress concentration" over a narrow bend in the wide beam/floor element. Although the pile cap is not a good example (usually wrapped in heavy reinforcement in all directions), it does help to visualize uneven stress distribution on the cross-section. Similar to the T beam, the stress is highest near the pile (as support) and decreases to zero at the free edges. While overall shear capacity is adequate, but the high stress is concentrated in the center that can cause cracks locally; weaken the performance and durability of the continuous pile cap that behaves like a wide beam. So very often the shear reinforcement is utilized to compensate for the high stress in the concrete near the support.

The concept above has carried into the design of the flat slabs. In practice, you might encounter the so-called "embed beam", which is a narrow band of longitudinal reinforcement enclosed in the transverse reinforcement to form a rigid strip that acting similar to a physical beam (without stem). The code takes care of the phenomenon of stress concentration in two way flat slabs (considered as a very wide beam) by specifying the column strip and the interior strip, however, other than one or two-way shear, the transverse reinforcement (for the effects of shear or torsion) is left to the judgment and care of the individual designer/engineer based on the effects of special structural layout, load pattern has had on the durability and appearance of the slab (wide beam).

The stress variation in a wide beam is best visualized through the stress diagrams from a FEM or plate analysis. Often the transverse reinforcement is not mandated by code, but personal judgment and preference, also his/her experiences. Hope this write-up helps.

Not the answer you're looking for? Browse other questions tagged beam reinforced-concrete building-design or ask your own question.

3
Design a beam that is straightened with force on one end
1
Is continuous beam design deemed “unsafe” by any code of practice/design practice for reinforced concrete building structures?
5
Which one is preferable? Multiple layers of reinforcements or one layer of reinforcement?
2
Reinforcing beam and slab with correct steel bar structure
3
What is the effective depth of a beam with two layers of tension reinforcement?
1
At what level is the Grade Beam most effective at pile cap level or at Slab-on-grade level?
2
Are the design load values in this floor determination table (span chart) inclusive or exclusive of the given floor weight (inherent dead load)?
3
Why is there a row of circular holes in this concrete beam?
2
Limits of Euler-Bernoulli Beam Theory for Wide Plate in Flexure?