Is a 3 Hz beat frequency from my neighbor's HVAC a sign of a malfunction?

I'm being annoyed by a pulsating hum which comes from my neighbor's HVAC system. I read up a little on the design of HVAC systems and I came to a tentative conclusion that what I'm hearing is a compressor being driven by an AC induction motor. A frequency spectrum shows a spike at 120 Hz and another at 117 Hz; which of course produces a 3 Hz beat. The 117 Hz spike actually moves around between say 117 and 118 Hz. I guess what I'm hearing is called a "slip frequency beat"? I'm in the US, where the mains frequency is 60 Hz; so 120 Hz is the audible hum produced from magnetic fields in motors, transformers, and so on.

According to this document (p. 3), the "slip frequency", defined as "per-unit slip times line frequency" is the "actual frequency of current in the rotor conductors". Per-unit slip is proportional to torque and is commonly 0.03 - 0.05. This means 3 Hz could be a typical slip frequency, and I guess 117 Hz could be a slip-frequency sideband of 120 Hz. But there is no 123 Hz spike, and in fact the rest of the spectrum is pretty quiet except for spikes at 59 Hz and 29 Hz. There are harmonics at 234 Hz and 240 Hz, but the harmonic at 352 Hz is stronger than that at 234 Hz. All the harmonics have much less energy than the 117 Hz and 120 Hz fundamentals (say >20 times less). The 29 Hz and 59 Hz spikes don't seem to vary much when the compressor turns on and off, and neither does the 120 Hz spike. Only the 117 Hz spike and its harmonics show an "on-off" square wave in a time-series plot, corresponding to compressor activation at 10-minute intervals.

I can't provide decibel-calibrated sound pressure levels (and since I don't have access to the equipment, I can't measure the actual vibration intensity). I would say the sound is not loud enough to be annoying unless you have to live next to it.

I have calculated that the sound amplitude in the 117 Hz "spike" is 3 times higher than that in the 120 Hz spike. I don't know if this reveals anything significant.

I've read that the speed of an AC motor is 120 Hz / (number of poles), and that the minimum number of poles is 2, so I'm concluding that the motor cannot be turning at just under 120 Hz (7200 RPM) but rather must be going at some slower speed like 60 Hz (3600 RPM). This seems to imply that the 117 Hz vibration is not mechanical vibration from the rotor - but I'm not sure what else it could be. The linked document mentions certain faults producing vibrations at 2 x RPM, but it seems these should be concurrent with vibrations at 1 x RPM. But, as I said, the 59 Hz spike doesn't vary with compressor activation. 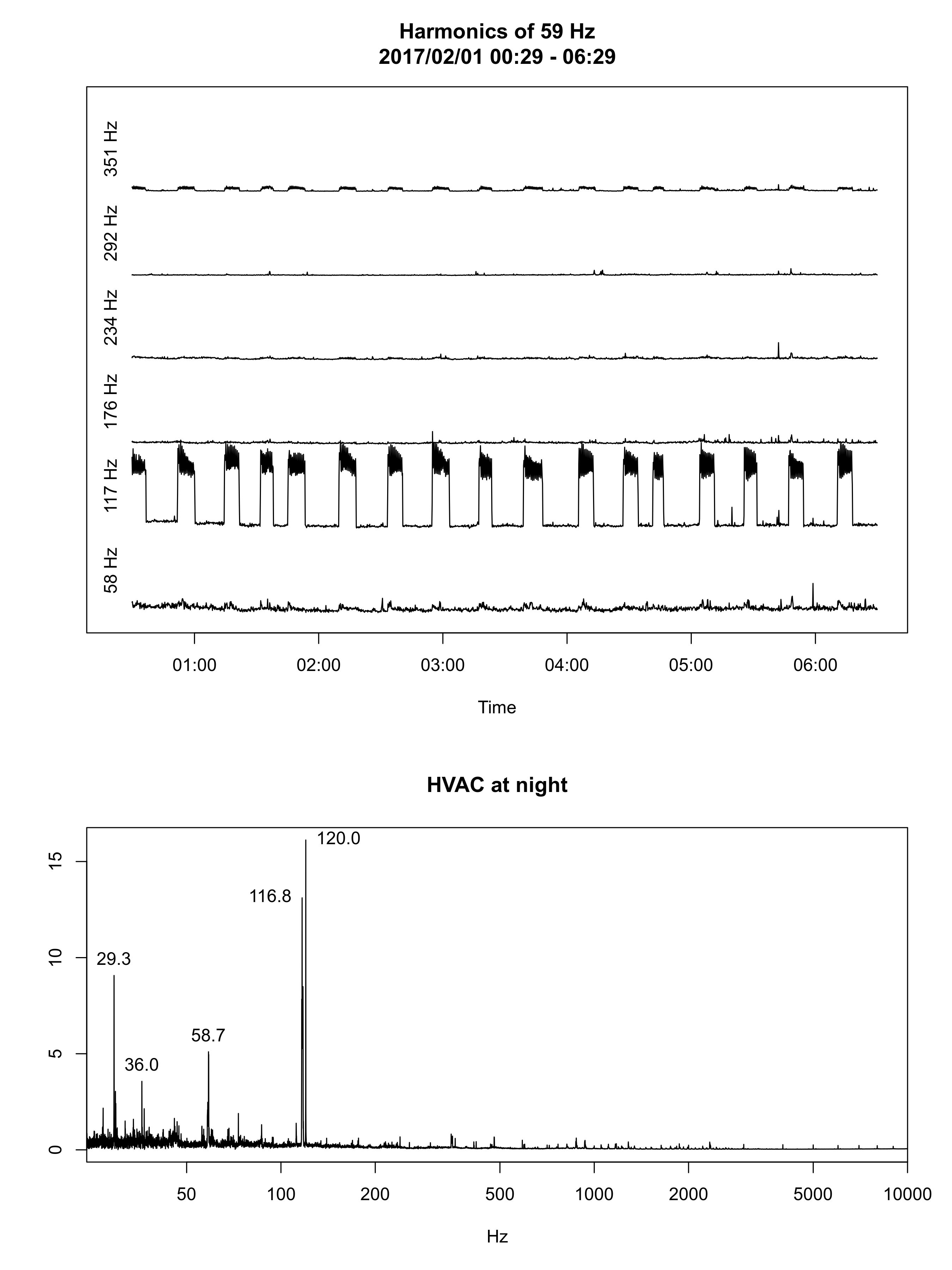 According to the linked document, some amount of vibration is normal and the surest way to diagnose a developing fault is to take spectral readings over time and see if anything is getting worse. The neighbor's HVAC system is 20 years old, but I only have readings for the past six months, and there seems to be a lot of fluctuation just from weather conditions and diurnal temperature variations influencing the propagation of sound across the property line. Because of this I can't say that there has been an obvious trend upwards in sound amplitude over this time period.

A 3Hz pulsating hum-- noise that is getting louder and softer at 3Hz. Yes, I agree that would be quite annoying.

Since this is a residential unit in the US, both the compressor and the fan are run with single phase asynchronous motors. Almost certainly, they are four pole with an 1800 RPM synchronous speed, running about 1750 RPM or so, depending upon load. The peak you are seeing at 116.8 Hz is consistent with this since that corresponds to the second harmonic of a 1752 RPM rotation rate. The big peak you see at 120Hz is interesting. I wonder if this is due to a loose winding in one of the motors.

The compressor is inside the A/C unit, in this case, on top of the house. The fan has to be exposed to the outside. My experience is the fan is what you hear most of the time.

From the graphs, it looks like everything is working correctly. The compressor or fan is cycling in and out every 20 minutes which is to be expected. The duty cycle is less than 50% which means it is properly cooling so I guess the coolant levels are adequate. The sounds are probably caused by a combination of loose sheet metal and maybe a loose winding. If it were my unit, I would put my hand here and there to try to guess where the noises are coming from and make sure everything I can get to was bolted down securely. Recognizing that it is not your unit and you don’t have access to it, much less permission to go monkeying around, this won’t do you much good. If it is not running in heat pump mode and it is running at close to 50% duty cycle in February, (when this question was originally posted), it won’t be able to keep the house cool when it starts to get hot and your neighbor will get it fixed, hopefully with a replacement unit.

After reading the linked document, I think you should go over there in the dark of night and do a “power trip test” if for no other reason than to get some peace and quiet.

Not the answer you're looking for? Browse other questions tagged vibration hvac compressors ac frequency-response or ask your own question.