Hi there (from Europe),

I am completing what should be a relatively quick assessment for the client, but I have started to second guess my self and would like some reassurance.

Essentially the job involves removing a portion of an existing 2.6m x 1.22m concrete slab in order to install a manhole (1.2m x 0.75m). I've taken the fairly rudimentary (and conservative imo) approach of simply reducing the existing slabs moment capacity by reducing it's width. For example, for assessing the moment capacity of the current slab I took a width of 1.22m, but it's reduced capacity would be based on a width of 1.22-0.75=0.47m. 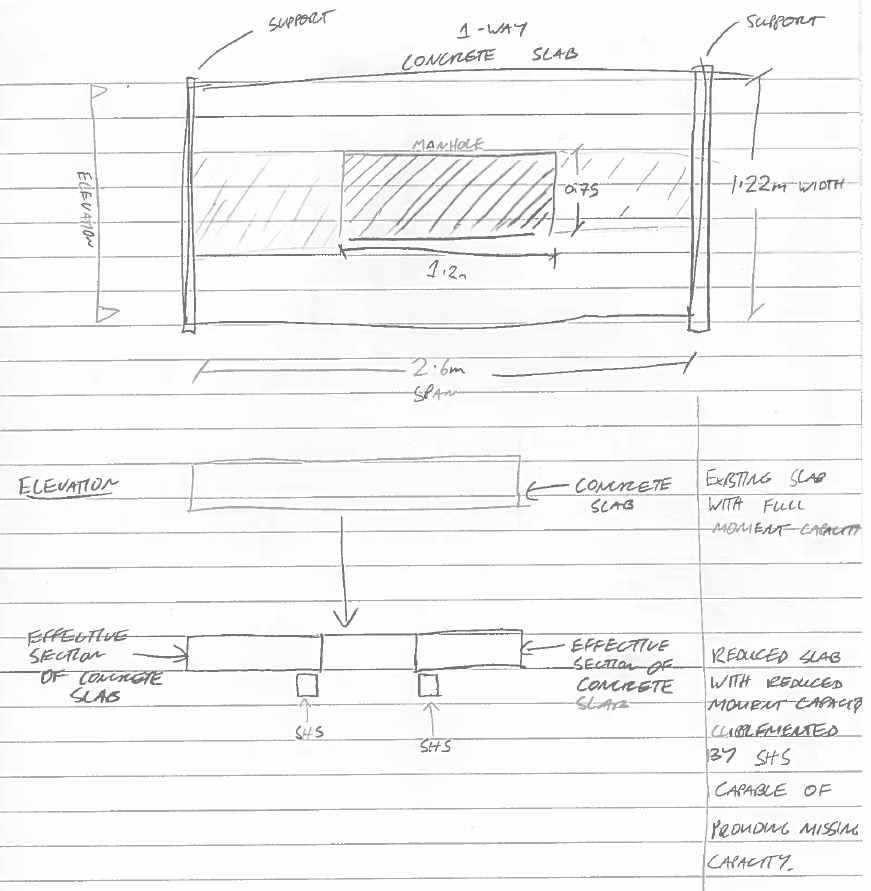 This is a fairly simple approach but the more I think about it the more I'm beginning to reconsider and instead consider assessing the steel and concrete as a single composite section to Eurocode 4.

This is a small scheme with a low budget and I lack experience of Eurocode 4 to quickly assess this.

My question is thus: Is my approach conservative enough to safely size steel members or is there something fundamental that I am missing in composite design that makes my solution inaccurate and dangerous?

It isn't clear from your sketch whether the end supports are fixed or pinned, so I'm going to assume they were pinned. However, this is going to be a qualitative answer, so that doesn't actually matter too much.

Assuming pinned supports, the original slab was therefore basically a simply-supported beam, with no moment at the ends and positive longitudinal moment at the midspan equal to $\frac{qL^2}{8}$. Transversal moment would be effectively null.

Now, with your suggested reinforcement, you will be completely changing the slabs structural arrangement. Indeed, it would no longer be "the slab", but instead eight different slabs (for manual analytical purposes): 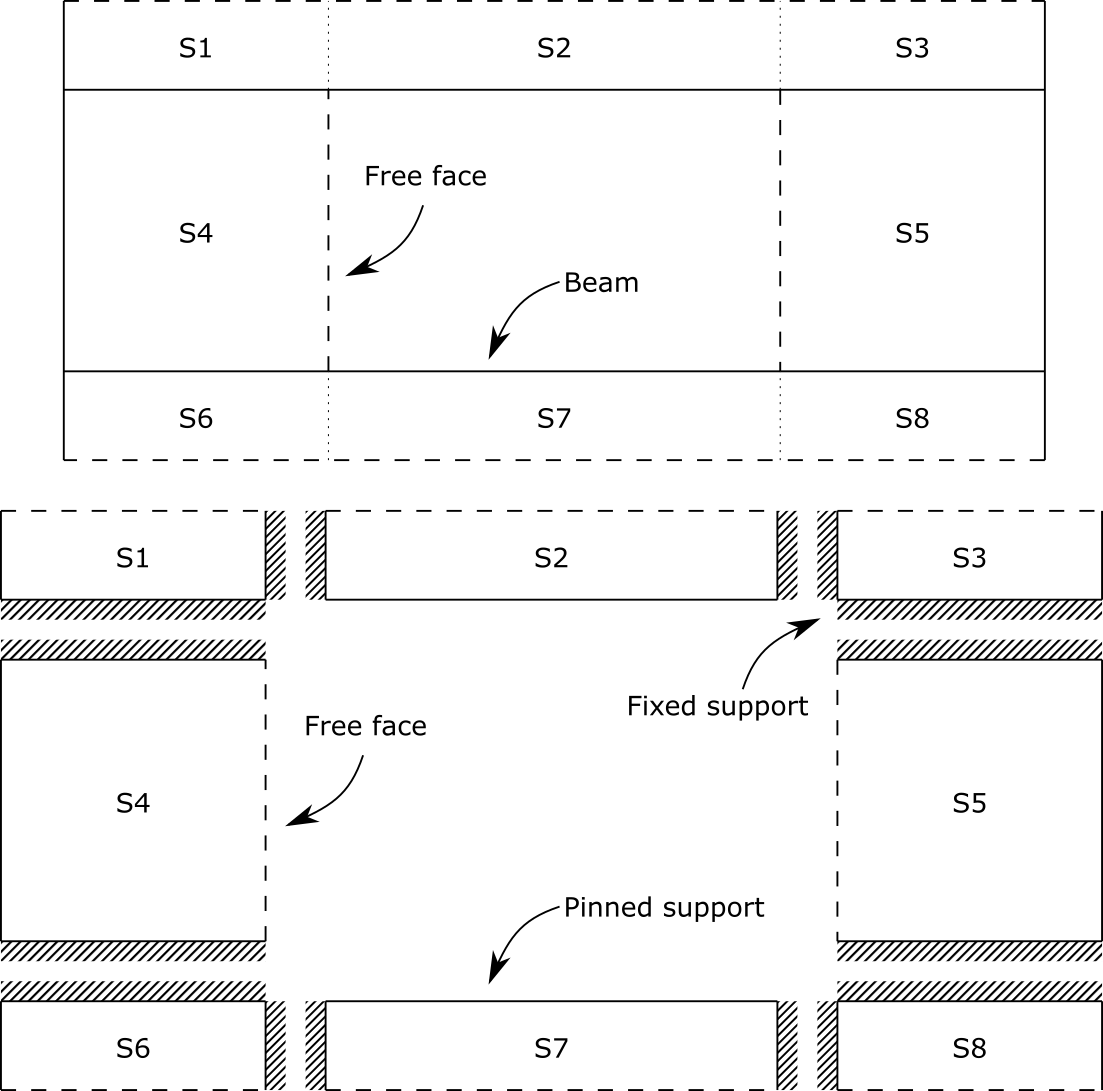 So, slabs S1, S3, S6 and S8 are effectively equivalent, as is S2 equal to S7, and S4 to S5. So now, when discussing the different slabs, I'll only mention slabs S1, S2 and S4, each representing all their equivalent slabs.

The division of the unmodified strips of the original slab (S1-S2-S3 and S6-S7-S8) into three slabs may seem a bit odd. After all, this method would imply in a negative bending moment between S1 and S2 even though they are actually the same slab with no beam beneath them. But that is in fact correct, since S4 will now resist any rotation around the S1-S2 interface. Meanwhile, between S1 and S4 there is now the reinforcing beam, which adds stiffness to that interface.

So, if you want to be very conservative, you should calculate the slab with all its loading as if it were originally constructed with that hole and see what is the required steel reinforcement (rebar) in both the longitudinal and transversal directions. Check to see whether the built slab satisfies all of these requirements. If it does, you're fine. If it doesn't, then the slab itself may need to be reinforced, and simply adding steel beams may not be enough.

Indeed, my concern is with the negative reinforcement that will be necessary in the slab. The positive will probably be fine since you are effectively reducing the effective span of each span area and whatever load is transferred from S4 and S5 will go to the beams and not the neighboring slabs. The original slab was probably not designed with any significant negative reinforcement, so I would not be surprised if a problem occurs there, especially on the S1-S4 edge, where you're dealing with negative transversal reinforcement which is probably almost nonexistent in the original slab.

An argument could be made that considering the entirety of the load when calculating the reinforcement would be excessive. After all, some portion of the self-weight and dead load will probably be unmolested by the hole (for instance, whichever part of the load which already goes from S1 to S3) and therefore shouldn't be considered when calculating the new configuration. This would be especially important when considering the effect of the beams, since if the slab doesn't redistribute much load to them, they won't be of much use. However, the hole is so massive (my drawing is more to scale than your sketch) that considering a full redistribution of loads seems entirely reasonable to me.

Another question is how to fix the beams to the slab in such a way as to certify that they will indeed work in tandem. As @AndyT commented, this is usually done by taking special measures when the slab is poured. Obviously, in this case that is not possible. My suggestion would therefore be to use anchor bolts. This, however, would not be possible with SHS profiles since you wouldn't be able to access the bolts along the beam's span. You'd therefore need to change to L-, T- or I-shapes.

However, as described above, you may need to add some negative reinforcement to your slab. If that is the case, then you can make a slightly larger intervention: 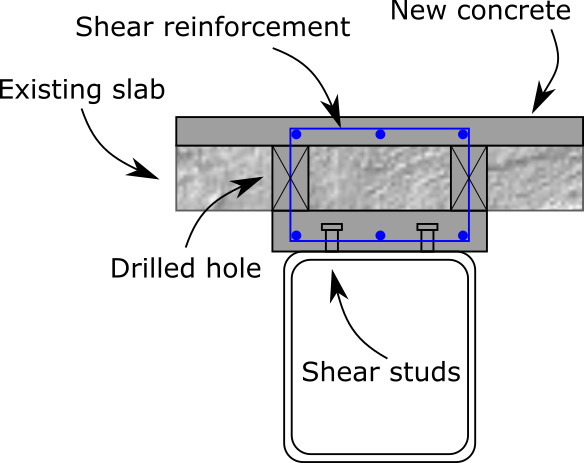 Regarding composite action, it will be minimal therefore you are doing well to ignore it.

Probably the design is adequate (except maybe for point 4 below)but i want to mention some missing elements from your analysis:

Not the answer you're looking for? Browse other questions tagged civil-engineering steel concrete composite eurocodes or ask your own question.

1
What effect does the weight of a wall have on the steel in the reinforced concrete below?
1
Steel Continuous Beam Structural Diagram
2
How can the shear capacity of a concrete slab be determined for effective depths under 200mm? [Eurocodes]
5
How does infill material affects the capacity of a tubular section with H-section inside?
0
Composite beam- increase in bending moment due to reinforced steel
0
Assessment of steel beam for lifting to Eurocode 3
1
Exactly what makes steel-concrete composite beam better than pure steel?
0
Stiffness factor of beam member
1
Reinforced concrete by steel, poor durability, why?