Why does the stress-strain curve decrease?

This is a stress-strain diagram

For the explanation of the loss of stress from E to F, I'll refer you to my answer to another question. Basically, the drop in stress seen in the diagram is a consequence of the fact that we use engineering stress (not taking the loss of cross-sectional area into consideration) instead of true stress. In a true stress diagram, there is no such drop. See this question for answers to why we use engineering stress instead of true stress.

Now, as for why there's a drop between C and D, that has nothing to do with our use of engineering stress (though the drop is smaller in a true stress diagram). Instead, that occurs due to the steel's microstructure. Since I'm not a materials engineer, I apologize for the "loose" vocabulary I will use to explain this phenomenon.

This happens due to the fact that steel contains carbon which occupies interstitials and effectively impedes the "flow" of the surrounding material that wants to yield at the lower yield value. Additional stress is required to overcome the carbon's resistance, at which point everything can move uninterrupted, which means that the material can then continue to yield at a lower stress.

It is worth noting that at or above the temperature where interstitial diffusion is as fast as the dislocation motion, the upper and lower yield point phenomena change into a serration on the stress-strain curve. This effect is known as dynamic strain aging, in contrast with static strain aging, because the material is being aged as fast as, and while, it is being strained. The effect is shown in the diagram below. One may also change decrease the strain rate to achieve a similar effect to increasing the temperature.

In the diagram, at X the sample is unloaded and then immediately reloaded. At Y the sample is unloaded and allowed to age for sufficient time. Note the recovery of the yield point to a higher value than originally: static strain aging. Note that there are serrations after the upper yield point, which indicates the material is being strained sufficiently slowly to allow the carbon to catch up to the dislocations, i.e. dynamic strain aging. 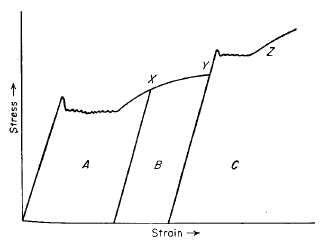 The yield point phenomenon occurs due to the segregation of impurity solute atoms(C and/ or N in Fe) around dislocations so as to reduce the strain energy associated with the distorted atomic arrangement (maximum in bcc metals, less in hcp metals and least in fcc metals). This additional stress required to free the dislocations and set them in motion needed for plastic deformation is called the upper yield point. Once dislocations have been freed, the stress needed for their motion drops abruptly and is called the lower yield point. There comes slight variation in its value due to the interaction of moving dislocations with the impurity solute atoms obstructing their paths. Further Reference

15
Why do we even use engineering stress?
10
What happens from B to C in this stress strain diagram of mild steel?
4
Why is the point of failure load lower than the peak load?

15
Why do we even use engineering stress?
4
Why is strain also normalized to the parameters of engineering strain?
4
How does a graph with tensile stress-strain curve and compressive stress-strain curve superimposed look like involving true stress and true strain?
4
Why are the processes called "Precipitation Hardening" and "Solid Solution Strenghtening"?
4
Tensile Test Necking Location
0
Can crosshead movement be used to measure strain in tensile testing instead of an extensometer?
1
Can we say that stress strain curve for a tensile test is function of strain rate and temperature?
0
Why tensile test specimen is enlarged at its ends?
0
Stress-strain Curve Interpretation