How would the axial force in a rod of a doubly-built in structure be determined? 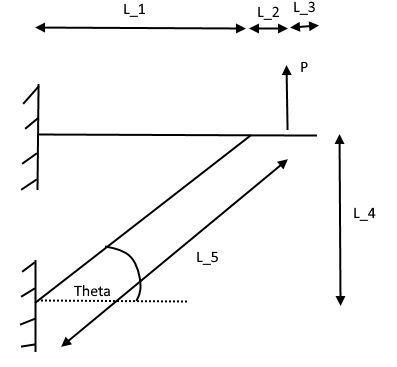 Firstly, I have defined the vertical, horizontal and moment reactions at the top and bottom built-in ends as $V_1, H_1, M_1, V_2, H_2,$ and $M_2$ respectively. I have also defined the axial force (assumed tensile) in the diagonal member as $T$.

Vertical equilibrium of the beam:

Horizontal equilibrium of the beam:

Moment equilibrium of the beam:

Vertical equilibrium of the rod:

Horizontal equilibrium of the rod:

Moment equilibrium of the rod:

When I attempt to solve the simultaneous equation, I get an indeterminate problem and can not solve for the value of $T$.

10
How is the design life of a reinforced concrete structure calculated?
3
Can the strength of a strut be determined by deflections?
1
How should I calculate the centroid of a hollow structure when analyzing a wind load?
4
How to calculate indeterminacy of pin-jointed frame?
9
What is the umbrella-like thing surrounding this new structure?
1
How would I do a buckling analysis with an additional fixed known lateral force?