How does a pulley (with friction) satisfy equilibrium?

In the picture shown : 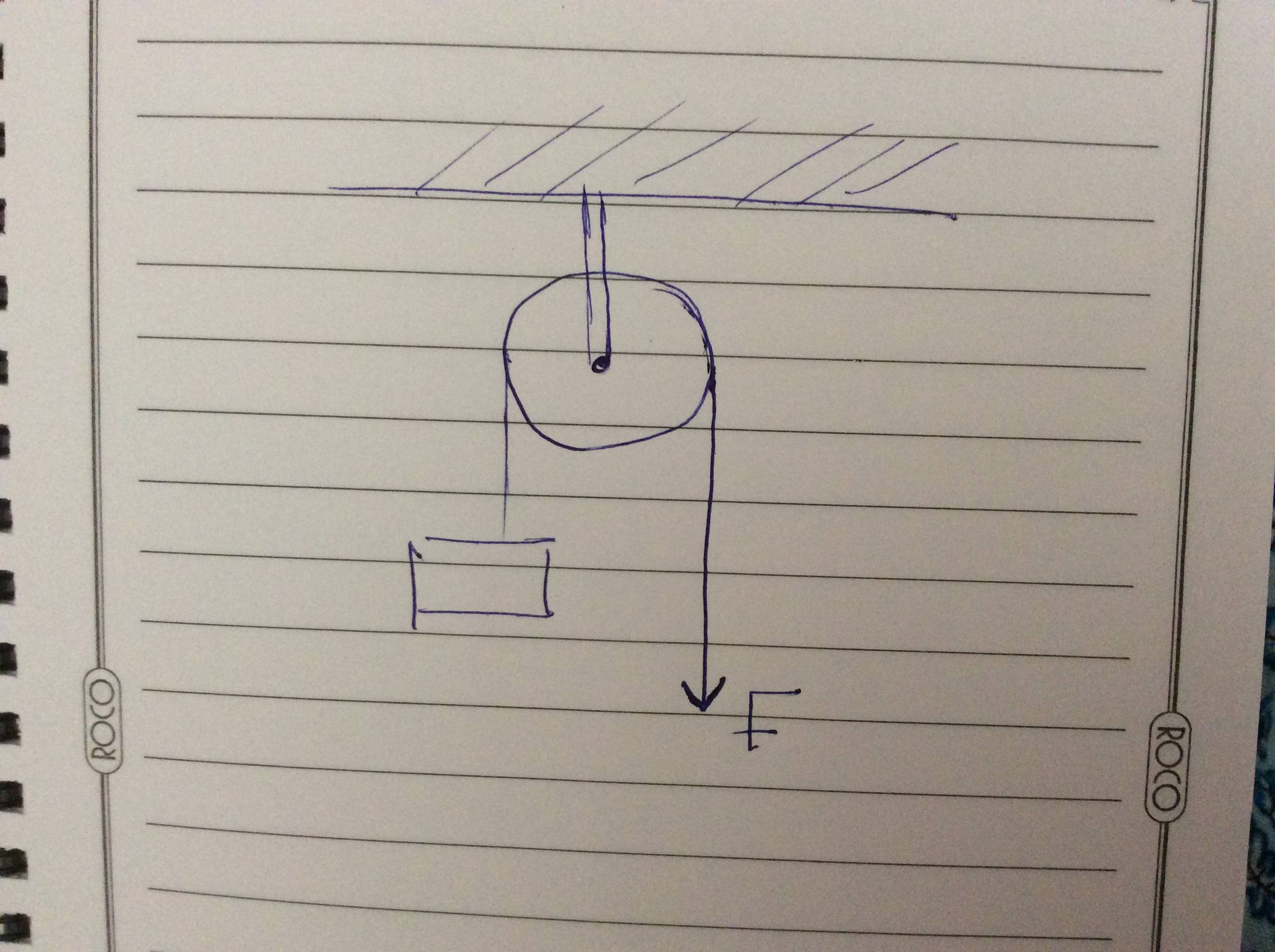 Now , if we want to draw the free body diagram for the pulley, it will look like this: 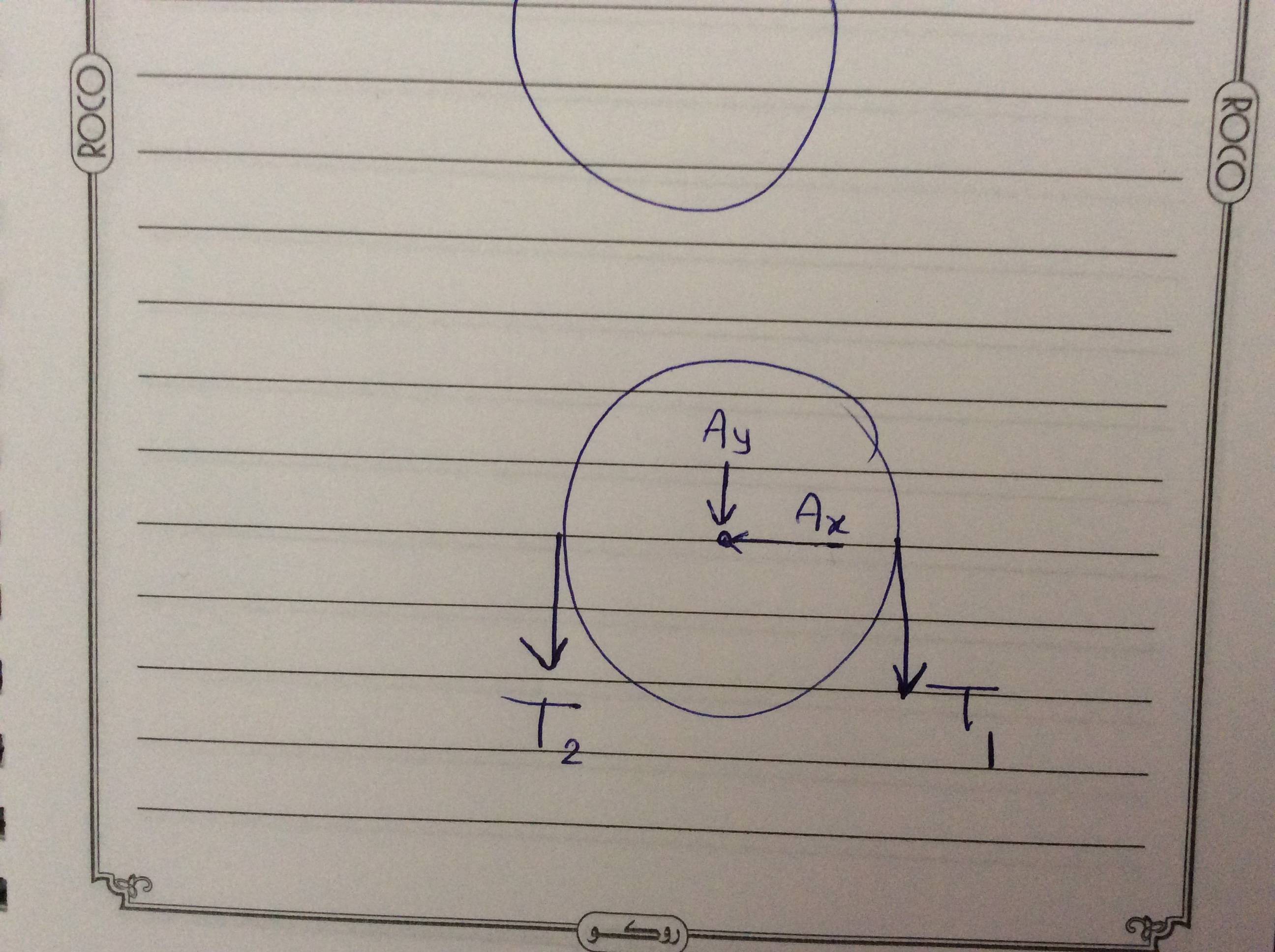 Now if the pulley is not frictionless (there is friction between the pulley and the cord), then the man must apply a greater force in order to support the box (because you are supporting the box and some of your force is dissipated due to friction) (the system here is also in equilibrium). That means that $T_1$ is greater than $T_2$, but this situation will not satisfy the equilibrium equation (summation of moments about point A =zero) because $T_1 >T_2$

What is my mistake when analyzing both situations?

This is a solved example in my statics book 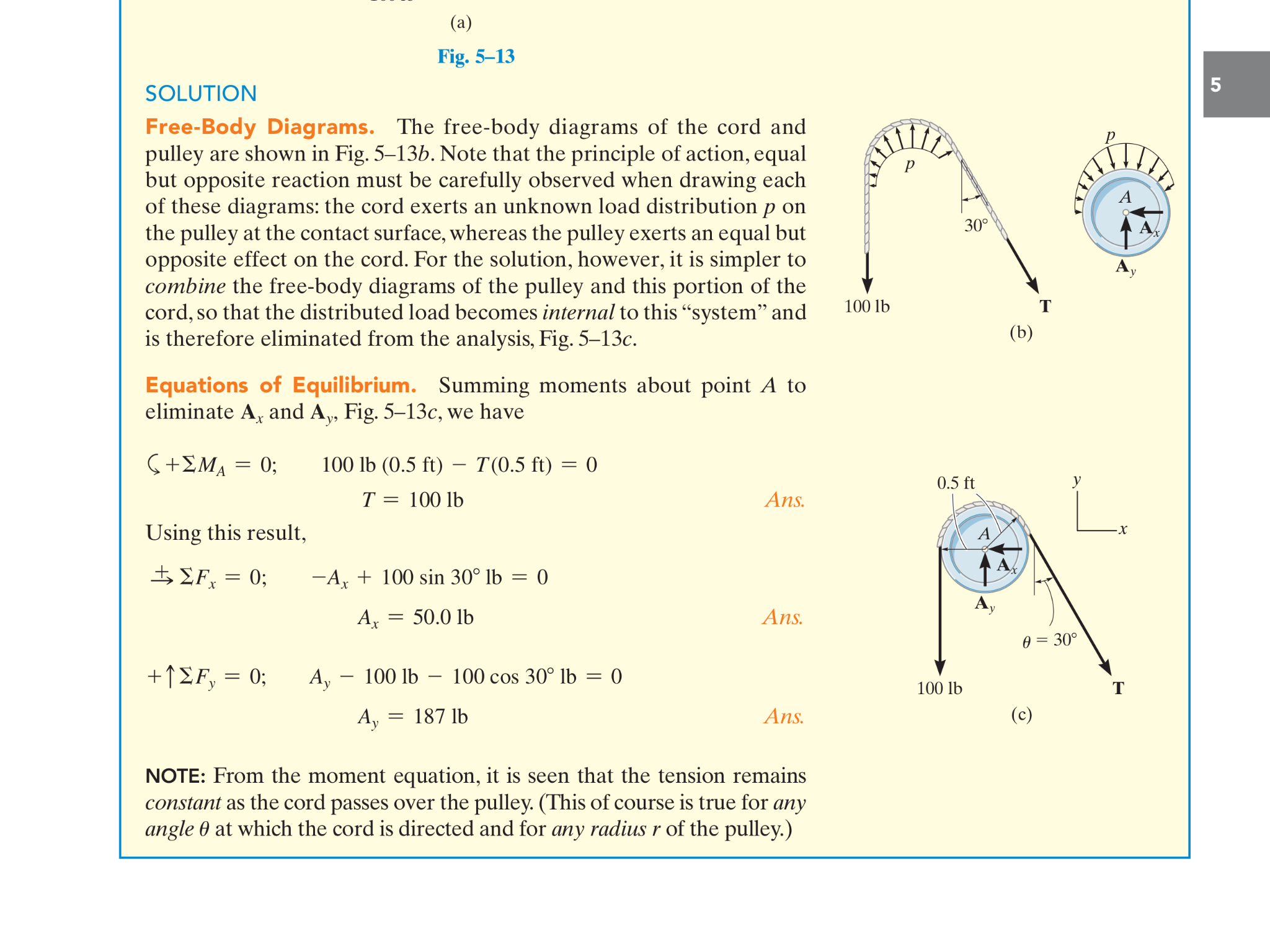 You're thinking about the friction wrong.

Friction opposes relative movement. Why should the man have to pull harder if there's friction in the pulley?

which means you actually need to apply less force if there is friction.

I sketched a FBD to help illustrate how the moments and everything will balance. Note that this is approximate as the friction would actually be spread out over the contact surface of the rope. Also note that I don't think you would usually worry about friction in the rope-pulley interface. I believe the bearing in the pulley would usually resist since ideally the pulley is actually rotating with the rope. 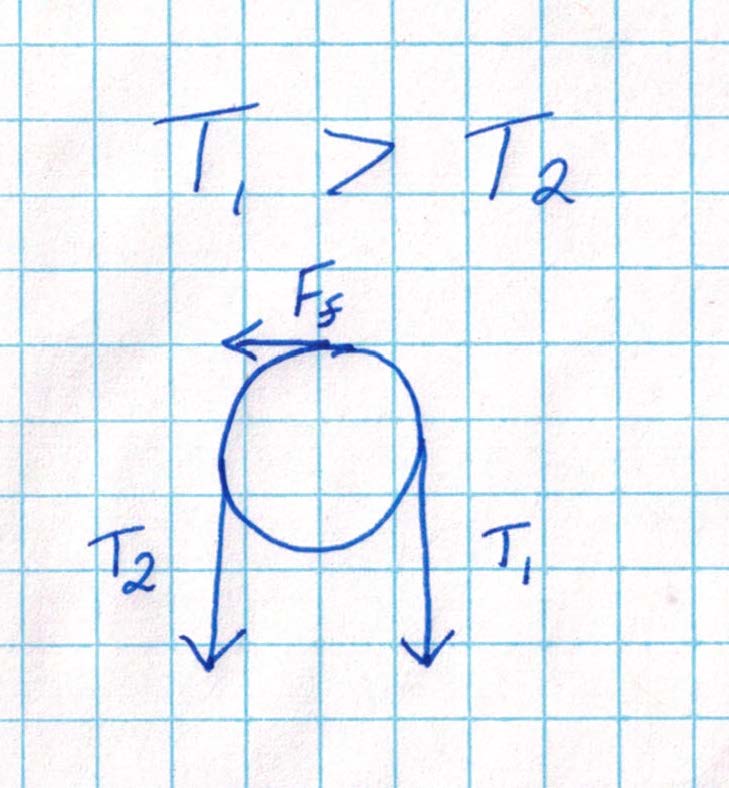 There are two possible sources of friction, not one - if that's not clear, you may get confused. So let's start from basics.

First, the cord can slip freely, or experience friction, sliding on the pulley. Second (and I know your question kind of said "ignore this") the pulley can turn freely or experience friction sliding on the rod that's supporting it. We will treat the two sources of friction as if they acted like one source as far as the cord is concerned, but it's important to notice it could exist and might need careful consideration.

(A third point would be the angular momentum/moment of inertia of the pulley itself, if the pulley were heavy and needed significant energy to begin to turn as the cord moves on it, but we will ignore this as well, and assume a lightweight pulley.)

I don't have drawing software here, but your answer goes like this:

Forces on the box

Forces acting on the cord/tension in the cord

The cord (slightly simplifying as is usual for questions at this level) is also in equilibrium, so from the cord's perspective, it experiences three forces which also balance out. On one end, the force of the box, on the other end the force due to the man pulling and in the middle, any static frictional force from the contact with the pulley (that exists when the cord isn't moving). There may be some, or none. But if there is a frictional force, it's going to resist movement of the cord, so it'll act the opposite way to whichever way the cord would otherwise move.

Suppose the pulley can exert a force on the cord due to friction, up to an amount of $N$ newtons. Then what will happen is this:

The man pulls with force $F$. But the cord is in equilibrium. The net force from pulling and from the weight of the box is $F-W$, and because it's in equilibrium, this has to be "small enough", between $+N$ and $-N$, otherwise friction can't provide enough force to balance it and it won't stay static in equilibrium.

So remembering that $W=mg$, the condition will be that:

and splitting this into separate conditions and rearranging:

We can't do more because in the question, the force needed by the man to maintain equilibrium depends on 2 things - the mass of the box, and the maximum force possible due to friction, and we don't have any information to work either of these out any further.

So what this says in plain English is that the force the man has to apply, needs to be "close enough" to $mg$, that friction can supply the rest of the balancing force needed for equilibrium. If friction provided no force ($N=0$) then you'd get $F =mg$ which is the exact solution for a frictionless pulley.

9
How does pressure change with depth in earth?
10
Where did I go wrong conceptually when attempting to calculate the maximum force on a truss at a given joint?
1
How/where to take moments to solve a static equilibrium equation
6
Concrete formwork - best approach to counter uplift forces, for a freestanding pour?
3
Equilibrium of a Rod with an Actuator
1
Does a washer really increase static friction force?
1
Supporting flexible square plate of uniform density in equilibrium with only 4 rolling contacts placed along the square's diagonals
0
What does Leonardo da Vinci mean in his statement on arches?