I paddle several different types of small craft in the ocean and bays near my home. One phenomenon I've observed is beyond my understanding of drag on a narrow displacement hull. When paddling in water less than maybe 6 feet in depth, there is a very noticeable increase in drag, which increases as the depth decreases. This is true for all the types of boats I paddle, from a large 6-person Hawaiian outrigger canoe (L=40', width=2', draft=0.67') to a one-person racing kayak (L=20', width=1.5', draft=0.33'). I should add that hull speeds are generally in the 6-8 mph range. I've read that rowing shells also encounter this same drag and they are longer, narrower, but with drafts in more or less the same range.

I've read one explanation that the boundary layer on the hull makes contact with the bottom and the bottom increases the drag on the outer part of the boundary layer which in turn is transmitted to the hull. This seems highly unlikely to me, especially when the water is more than a maybe a foot deep. I don't believe the boundary layer from a 20 foot kayak extends that deep. As I said, this is noticeable at water depths up to 6 feet or more.

I've also heard that pressure waves from the hull bounce off the bottom and reflect back up to the hull and cause drag but as an engineer that doesn't really sound very rigorous to me.

It seems to me there might be some interaction between the bow wave of a boat and the bottom, since I know that the dynamics of surface waves do extend approximately as deep as their wavelength, and at these speeds the wavelength of a bow wave is certainly on par with the water depth. Can anyone give me a properly defensible answer to this?

I found some possibly applicable explanations here. The figure referred to in the quote below is 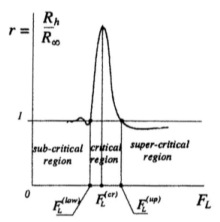 The attached plot [Hofman 2000] illustrates the basic principles of added drag due to shallow water. A non-dimensional depth-based speed parameter is on the X axis (usually noted as FNH, but shown here as FL), and a ratio of drag in shallow water to that in deep water is on the Y axis. You can see how shallow water drag increases rapidly as it approaches the “critical speed”, after whic h it just as rapidly drops off and produces negative added drag. Displacement hulls generally stay in the “sub-critical region” as they typically don’t have the necessary thrust-making “oomph” to get past the critical region drag hump. This is the mode that was described in the paper you read from our Knowledge Library. Planing hulls, however, typically can get past the critical hump, at which point shallow water becomes beneficial.

There are a couple interesting-looking references at the bottom of that web page.

There is a phenomenon often observed when two vessels are travelling close together on a parallel course. The effect causes the hulls to draw closer together due to the increased water velocity between the hulls, due to reduction in dynamic water pressure. This slight increase in water velocity on one side is enough to push the hull sideways. (Google 'Bernoulli' to learn more)

A similar effect is called squat (Google 'Squat effect'), where a vessel travelling in relatively shallow water causes a slight increase in the water velocity between the hull and the seabed. The result is a small increase in draft with a corresponding change in the wake profile, which slightly affects the resistance experienced by the hull.

Note that the mean water depth around the vessel is reduced when the depth-based Froude number is close to 1. It is not just that the vessel sinks and trims, which would imply that the wetted surface area would increase significantly. Finite width effects further complicate the situation.

3
What is the area when calculating the drag coefficient for a race car wing?
1
Could car waste heat be used to lower drag?
0
Coefficient of Drag (Cd) Question
0
How to calculate the viscous damping coefficient given drag force
1
How do cracks form on a ship's hull?
0
Calculate effect of drag on ball in motion
1
Is the drag coefficient/velocity of of a vehicle based on frontal area?
0
Drag coefficient of a complex object made using simple objects (with known drag coefficient) in small Re?
0
Can a design where syringes draw and push water to manipulate buoyancy be classified as a buoyancy engine?