What is the difference between a piston and a plunger compressor/pump?

My research has found a Quora link and another source giving two different, albeit not contrasting, definitions. Also, as far as I have seen, looking up "plunger compressor" also refers me to pumps.

I am looking to understand the proper definitions, and see some animated GIFs should you have some, that exactly tell these two apart.

Per the Plunger Pump Wiki:

A plunger pump is a type of positive displacement pump where the high-pressure seal is stationary and a smooth cylindrical plunger slides through the seal. This makes them different from piston pumps and allows them to be used at higher pressures. 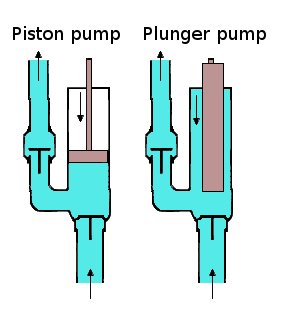 hope it helps to you useful

To the best of my knowledge, the main apparent difference between plunger and piston is that piston is short and plunger is long. You can see it on the picture in the @ericnutsch answer.

Hydraulic engineers employ plungers in different situations. Personally, I am only aware of two.

First is pressure increase, as @GisMofx asked and as @PeerapongKladkrayang responded. Simplifying the computational schematic without loss of generality but emphasizing the considering effect, one can say that pressure produced by a pump equals to the force exerted on a piston/plunger rod divided by the piston/plunger area: $$p = \frac{F}{A}$$ Let's consider two cylinders of the same crossectional area. Let's place a piston to the first cylinder and a plunger to the second one (as it is shown on the picture in the answer of @ericnutsch). Let's exert the same force, say $F = 100N$, on the rods of both of them. Let's say that the area of the cylinder and, therefore, the area of the piston is $A_{pist} = 10 m^2$; and the area of the plunger is two times smaller: $A_{plun} = 5 m^2$.

Therefore, plunger allows me to increase working pressure without increasing the size of my cylinder. It may be helpful in some cases when I am restricted in space dedicated for cylinder installation. E.g., I am working on creation of a compact excavator. Everything needs to be as small as possible, providing as much resulting pressure as possible.

The tradeoff here is that I lose a lot of power on pumping liquid between the plunger and the inner cylinder wall. Hence, efficiency of a plunger pump should be smaller. It means that I can pump out less fluid than in a piston pump, and the outer power of plunger pump is smaller (it can be shown through some formulas).

Another application of plungers is in positive displacement pumps. Such as axial piston pumps, for instance. When a plunger moves in the cylinder, a liquid film between the plunger and the inner wall of the cylinder prevents the plunger from getting stuck. It is as if the liquid film supports the plunger just because the plunger is long. In turn, piston is short. And even if it had a supporting liquid film it would've easily gotten stuck, merely because it is short.

Notice, that distinguishing between plunger pump and piston pump is a product of engineering practice. It is not a scientific term. Therefore, there is no a strict general definition of a plunger and a piston. Many years ago, when engineers were designing early hydraulic devices, they figured out that it is a smart idea to reduce a working crossectional area in a hydraulic cylinder. That's it. If you tried and ask a fluid mechanics professor about piston/plunger definition - you would most likely get an answer that one is short and the other is long (as I did in my time).

Also, notice that there is much more to add about the second application. But speaking about relative lengths of pistons and plungers - that's the only thing I can say.

Not the answer you're looking for? Browse other questions tagged mechanical-engineering pumps compressors or ask your own question.