How to I design a planetary gear with a gear ratio of 2:1 ( doubling the torque) [closed]

Trying to design a 2:1 gear ratio planetary gear, and I'm not sure how to begin. In the past I've had luck using this site to create an illustrator file that I can extrude in Rhino. This does not generate planetary gears, and I'm also unclear as to how design a planetary gear with a 2:1 ratio. 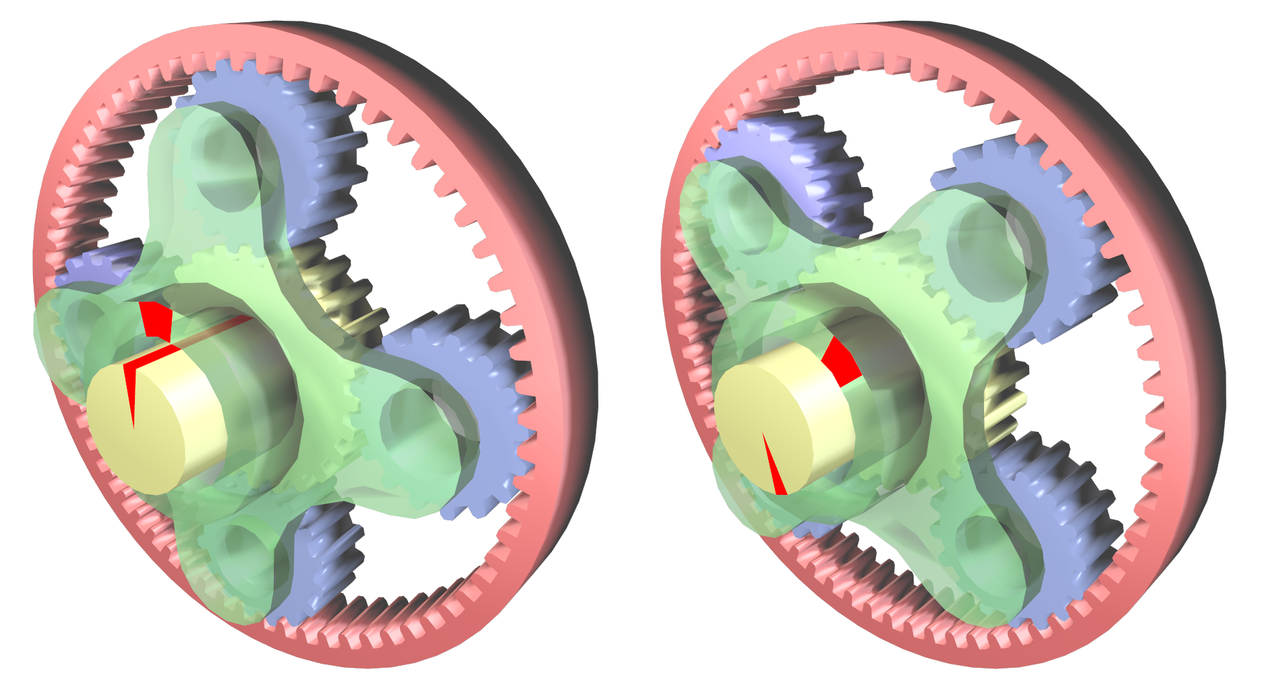 When designing planetary gears, there are three different types of gear present to be designed:

First of all, it's worth noting about internal gears. The sun and planet gears, being external gears (i.e. teeth point outward), are the exact same as any other kind of spur gear. However, the annulus gear is an internal gear, with the teeth pointing inward. An internal gear may look like a circle with an external gear subtracted from inside of the circle, and it almost is; there is just a slight difference in how far the teeth extend from the pitch circle. Not noting this difference in internal gears can lead to gear teeth undesirably colliding before properly meshing, causing the gear set to jam. Therefore, if you are fine with gears being output as .dxf files, then I suggest using Dr. Rainer Hessmer's gear generator, as it allows you to create both external and internal gears.

When it comes to actually designing these three different types of gears, the following equation, which I'll refer to as the speed rule, should be observed:

It is now a matter of selecting one of the above configurations that give you the appropriate gear ratio. Sometimes it requires a bit of trial and error: stick with a configuration and determine the value of $\rho$. If $\rho$ is less than or very close to one, try another setup.

For your case, with a gear ratio of $2:1$, let's try the following configuration:

Note that in this configuration, $\frac{\omega_S}{\omega_A} = -\rho$, so the input and output need to be rotation in opposition direction to get a positive value of $\rho$. Let's say the input is spinning in a "negative" direction and the output in a "positive" direction. Therefore:

A value of $\rho$ which is greater than 1 is obtained: this configuration seems to work well. Now we enter the second phase of the planetary gear design: assigning the number of teeth.

First of all, the planet gears are generally spaced equally apart from one another. To achieve this, the number of teeth of both the sun gear and the annulus should be a multiple of the number of planets. Otherwise, difficulties may arise when it comes to assembling the gears together. This is a process that may require some trial and error, and it may even required very slightly changing the value of $\rho$ to make it easier to make the teeth number multiples.

With the number of teeth selected, now select an appropriate module or diametral pitch, depending on how strong you want the gears, and that is the planetary gear set designed.

Not the answer you're looking for? Browse other questions tagged mechanical-engineering gears servo or ask your own question.

3
How do I mechanically convert 200 steps into 360 discreet degrees?
0
Does Cluster Gear Change The Gear Ratio
1
How to model a planetary gear system with transformation matrices?
1
Marginal Planetary Gear Set
1
How to design a coaxial 1:2 gear without reversing direction?
1
Calculating and Designing a Ring Gear for LEGO
1
Optimal gear combination with the same ratio
1
Criteria for gear design
1
Calculating torque in planetary gearbox