On construction of a triangular interferometer like LISA [closed]

I am planning to do a project in which I plan to mimic the LISA interferometer. For this I use the fabric material, Lycra to mimic space time and use spherical balls, forming a couple and connected to a rotating shaft thus mimicking binary stars.

As the balls rotate, they would cause waves in the fabric. Further away from the binary system is the triangular interferometer, this system comprises of three discs, each having a laser and a sensor. When the laser in aligned with the second discs' sensor, and the laser of the second to the third's sensor and lastly the third's laser to the primary's sensor, the three form a equilateral triangular system.

The three discs would be placed on individual corks and each disc would be connected to a vertical shaft with a shock absorber( so that the disc can oscillate about its mean position when the spherical balls start to spin and thus produce ripples). The three shafts are connected and hence form a system where the individual components can oscillate about their mean position when ever a disturbance is caused in its surrounding fabric. When the individual components oscillate, the alignment of the lasers would change. I need this system to be sensitive to minute translational displacements, so that when the ripples hit the system, the contraction and expansion of relative lengths between the lasers can be measured by some device connected to this system.

Below is an actual representation of LISA: 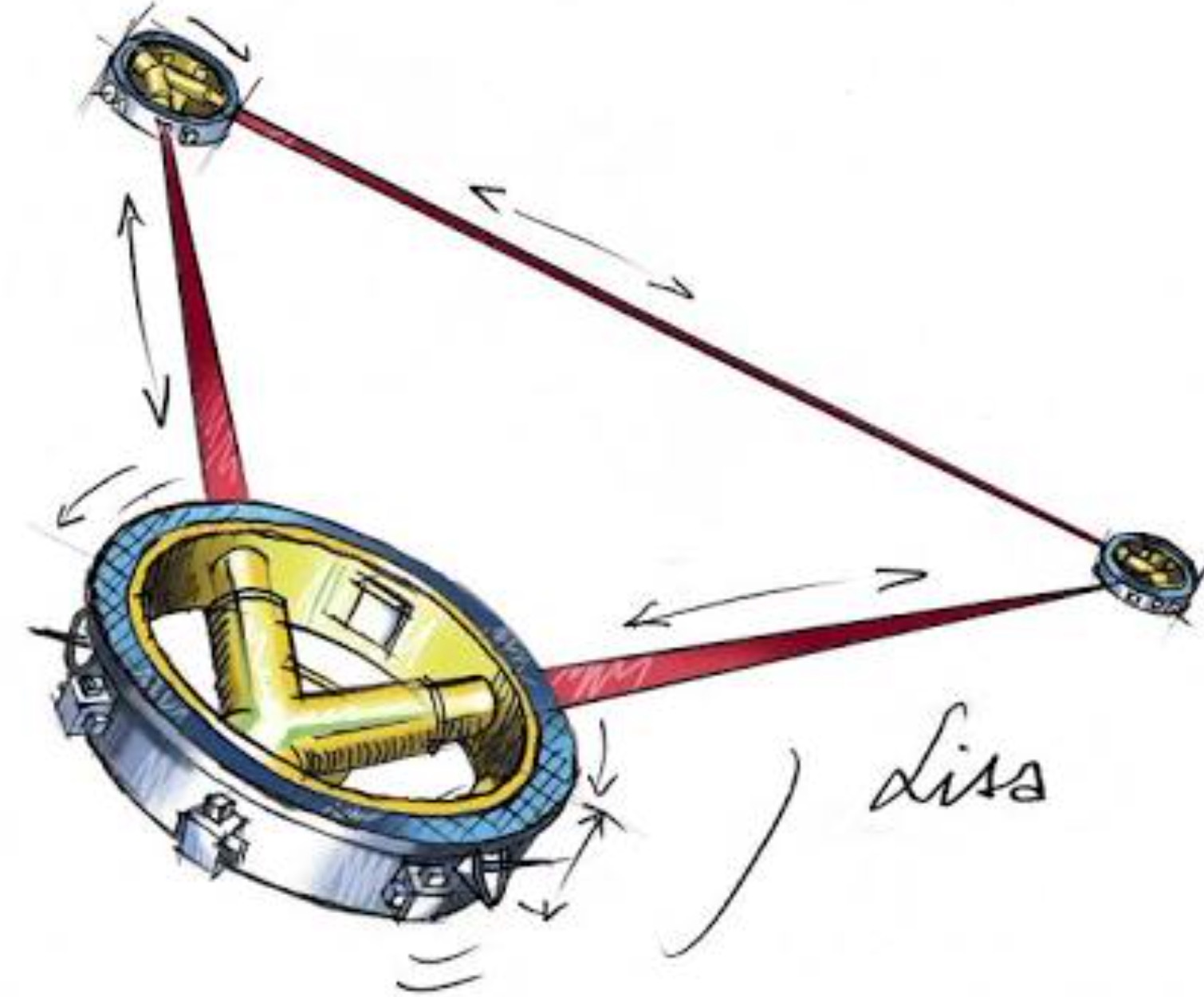 My question is regarding the position instruments I am to use/make, what sort of instruments and/or devices would be able to detect the minute changes in the position of the interferometers and measure the curvature of the wave when the wave propagates in the elastic medium? Any help is appreciated.

If I'm understanding your question correctly, you are asking how you can build a functional laser interferometer.

That is a pretty complex topic and impossible to cover in detail in a single answer. I'll however point you to Sam's laser FAQ, which is an excellent resource and has a few thoughts about building such from a CD-ROM drive: http://www.repairfaq.org/sam/laserlia.htm#liaint4

You may also want to consider using either time-of-flight or triangulation based laser distance sensors for your demonstration. They are nowhere near as accurate; they have a typical accuracy of 1 mm, as opposed to interferometry's 0.0001 mm. But their construction is significantly simpler and they are commonly available as premade modules.

Not the answer you're looking for? Browse other questions tagged lasers experimental-physics building-design or ask your own question.

2
What's the purpose of these small closet-like-rooms-without-a-door?
6
Can all electromagnetic spectra be focused like a laser?
2
How does the Michelson interferometer measure the self-coherence function of coherent light in an incoherent background?
0
Device that emits a safe beam of light - doesn't have to be visible (Like laser, but safer)
0
Could pre-stressed graphene be used to reinforce granite block construction?
0
If aboard a train being driven along a track by centripetal force, would it feel like you were on a regular straight track?
1
Lintel construction technique in UK in 80s using blockwork