Do all airfoils have a lift curve slope of $2\pi$?

I know that according to the thin airfoil theory all airfoils (symmetric or not) have lift curve slope of $2\pi$. I also know that finite wings should have less inclined lift curve because of the downwash. Then I saw this formula used for finite elliptic wings which is fine. $$ \frac{dC_L}{d\alpha}=a=\frac{a_0}{1+a_0/\pi AR} $$ The problem is $a_0$ is not $2\pi$ in examples that above formula is used. I am thinking that since non of the downwash effects are present for airfoils (infinite wings) $a_0$ should always be $2\pi$. What am I missing? Is it because not all airfoils are thin?

In general, most airfoils only approximately display the $2\pi$ lift slope as predicted by thin airfoil theory. That is because airfoils are not actually infinitely thin in practice, and will deviate from thin airfoil theory by a small amount. $a_0$ is left in the above equation so one can predict the elliptical finite wing lift slope (effects of aspect ratio), $a$, given the best predicted/measured infinite wing lift slope $a_0$. The thin airfoil theory will predict a finite wing lift slope of $2\pi$ rad$^{-1}$ or 0.1097 deg$^{-1}$. It is common to measure airfoil lift slopes near the 0.1097 deg$^{-1}$ ($2\pi$) for the NACA 4 and 5 series airfoils with thickness ratios below 10%. However, once you go above this thickness, the measured lift slope begins approaching 0.1 deg$^{-1}$ or 5.73 rad$^{-1}$ for smooth airfoils with thickness ratios near the upper limit of 24%. Similarly, if roughness effects are taken into consideration, the measured lift slope is even lower and reaches 0.1 deg$^{-1}$ at only a thickness ratio of 14% and can reach as low as 0.085 deg$^{-1}$ or 4.87 rad$^{-1}$ near thickness ratios of 24%. This is all detailed in the plot below from the Theory of Wing Sections (excellent reference text).

Oddly enough, for the smooth NACA 63-series and 64-series, the lift slope will actually increase with increasing thickness ratios. However, the roughness effects keeps the measured lift slope around 0.11 for thickness ratios up to 24%. This is detailed in the following 2 plots. 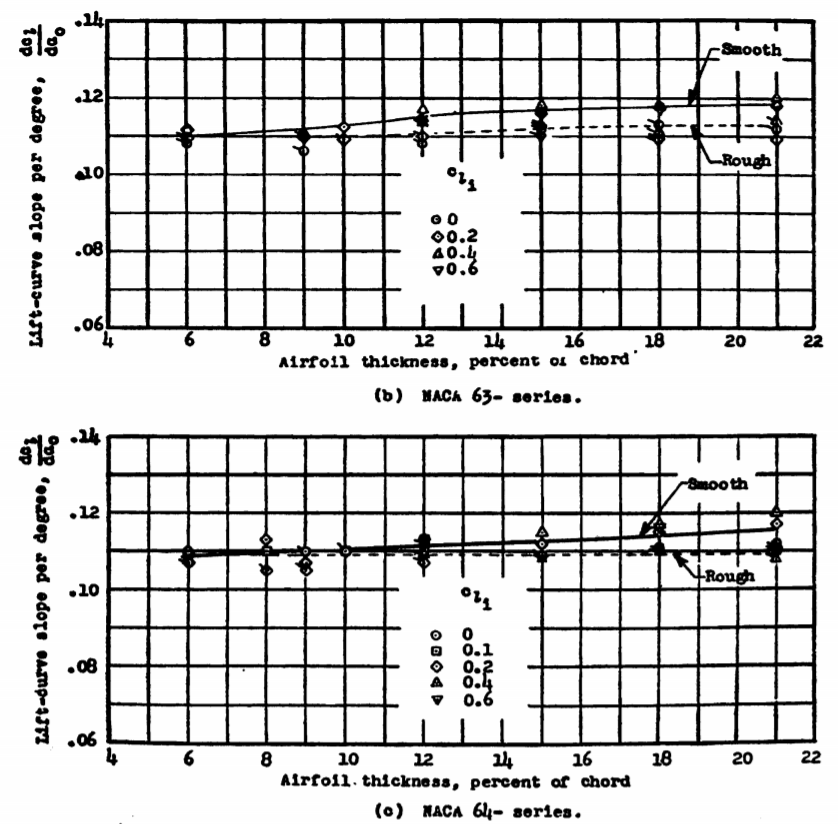 In summary, the $a_0$ is left as a variable for the designer to be predicted or measured using vortex panel methods or experimental wind tunnel testing, to which the designer can use the above equation to estimate the effects of aspect ratio on the elliptical finite wing lift slope, $a$, given the predicted/measured $a_0$.

Not the answer you're looking for? Browse other questions tagged fluid-mechanics aerospace-engineering aircraft-design aerodynamics or ask your own question.

4
Do all supersonic airliners have a high angle of attack when landing?
11
How is lift related to airspeed?
5
What is "Bernoulli-Lift", and why does it only account for 20% of an airplane's lift?
5
Questions about the level flight lift equation
2
Lift Requirements for Hybrid Airship
0
Max Lift to drag ratio
0
Pressure Coefficient with a Minima of 0 on Compressor Airfoils in Cascade