I don't really understand the explanation in the circled part of the image below (from here). 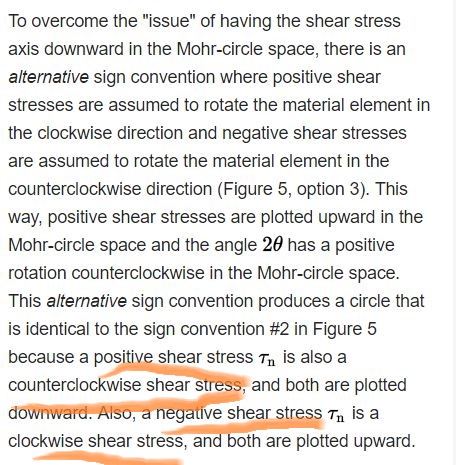 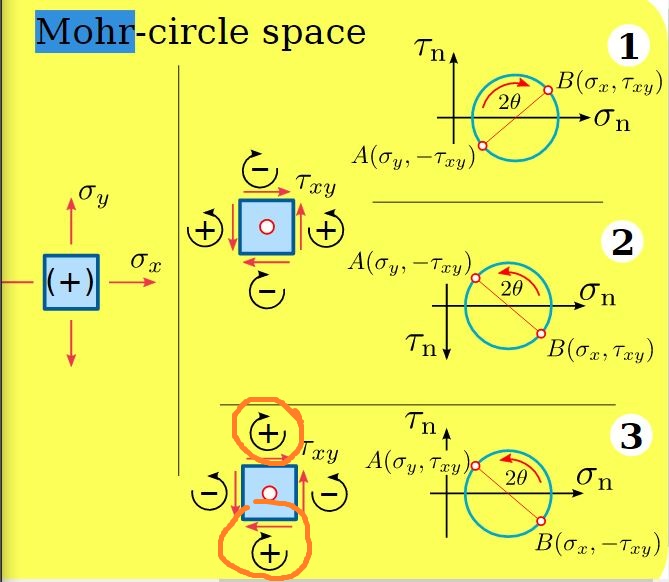 The sign convention for Mohr's Circle is dependent on the user. The direction of $\tau_n$ can be used in both ways, but you need to make sure that if you do it in the opposite method, that everything is opposite. Standard mohr's circle is what is used in Method 2 with $\tau_n$ pointing down and $\sigma_n$ pointing to the right ($\sigma_n$ will always point to the right no matter what method you use). In any of my classes that I use Mohr's Circle in, I never use method 1 as it has confused me too much with the change in direction of all of the elements.

If you are dealing with a situation that is similar to method 3, then you simply invert the direction of $\tau_n$ to get the proper sign convention. For example if you took a square bar of rubber that was mounted to a solid immovable wall and twisted it towards you with one hand, the positive $\tau_n$ ($\tau_y$) would be in the closest and farthest sides from you because those are in tension while the top and bottom are in compression meaning that $\tau_n$ is negative ($\tau_x$). This results in the picture seen in method 2. Now twist it the other way and the torsional stresses change in direction. This would result in the picture having $\tau_{xy}$ in the top left corner and bottom right corner rather than what is seen in method 2. They fix this method by inverting the signs resulting in the $\tau_{xy}$ being located where that are in method two, but the values of these stresses are now all opposite due to their change in direction. The Mohr's Circle used in method 3 depicts this.

if you were to use the values in method 3 in the Mohr's circle right away you would end up with something similar to method 1, there isn't anything wrong with that but because all the values are opposite it would be very easy to confuse signage during the calculations, so the $\tau_n$ is inverted so that you end up with something similar to method 2 that is easier to use. Then you just solve using the values you have and you should get your proper answer while making sure to pay attention to the direction of the values (positive/negative) that you get from your calculations.

0
Maximum bending stress at particular section of beam
0
shear formula confusion
0
shear stress before and after cut
0
sign of moment in buckling of column
0
number of total reactions in a structure
2
Is the calculated shear strain in a beam, engineering strain or tensorial strain?
0
Relationship between shear force and load intensity
1
How to use Mohr's circle to find stresses on a slanted plane?