The lateral forces and moments on the formwork have been easy to handle, but I'm trying to find a good approach to the vertical uplift hydrostatic force on small-scale/DIY formwork while concrete is poured, which is a general problem for which I can't seem to find a good solution.

I'm using a very fluid self-consolidating (SCC) mix since access for compaction would be hard once poured (slump-flow ~ 550mm, full spec available if needed). The form has one vertical face and one face with a 2:1 slope; it's this second face that creates uplift forces. The actual height of the visible wall above ground is about 92 - 100 cm but I've dug down to about 1.2 - 1.4m to allow a "heel" and more mass under the "soil" side, and also because then it can be braced against slipping by the other concrete under the pathway itself. The wall has about 0.5 m2 cross-section area. I've gone for an "over engineered" approach - it's also being laterally braced at both ends by perpendicular concrete works, and will have 10mm (A393) welded mesh and 12+16mm rebar and "L" bends added along the length and at the corners. The form is lined with polythene for easy removal of the formwork. I'm indifferent to surface finish. 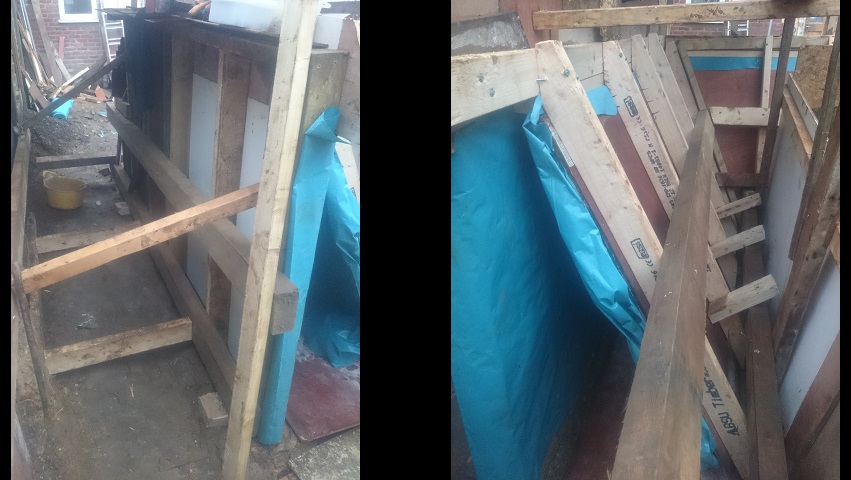 I'm confident in the actual formwork - plywood backed by C16 2x4's (50x100 mm), which are in turn backed by 3x6's (70x150 mm) held together with heavy duty structural screws, 12mm s/steel threaded bar between the formwork timbers of the two faces, all the entire form ultimately being braced laterally against solid ground on both sides nearby.

My concern is countering the vertical uplift forces from the hydrostatic pressure of the fluid concrete when it's poured, which will be about 4 - 5 tons equivalent (40 - 50kN), ie the weight of the "missing" concrete above the slanted face of the form. Basically, I want it not to be lifted off the ground by the fluid concrete. I've thought of several possible approaches to offset this force, but the reality is that I'm just not sure which is best or most foolproof, or if there are standard solutions used in civil engineering that I'm unaware of.

How can I easiest ensure the formwork doesn't rise at the base and the pour escape, when it's poured?

Yes, this is a very real problem. In "professional" construction I have seen similar situations handled by either:

As an example, when we specify pouring concrete (or flowable fill) around a pipe culvert, we typically specify pouring layers of 6"-12" at a time along with holding the pipe down.

I would say for smaller scales, a combination of methods would be easiest. I would try to pour in thin layers if your concrete supplier can handle it. Also place whatever you can on the form to help weigh it down (concrete blocks, etc).

To pour in layers, you shouldn't have to wait 48hrs. The concrete should set enough sooner than that, but you still may not be able to do multiple pours in one day.

This might be easier if you use a mix of concrete that isn't so fluid (not SCC). You will have to vibrate the concrete and you will likely have more honey combing on the sloped side, but that side will be buried anyway.

You are thinking about the right concerns, but there isn't really a simple solution. You may need to combine as many of your methods as you can reasonably do to be safe.

No matter what you do, be ready to stop pouring the instant that you see any movement in the form! You don't want to have to shovel a bunch of concrete by hand!

Fill it with water. It looks like it's solid on both sides and at both ends. Fill the water at the same time as the concrete -- you want the water level to be below the concrete level to avoid leakage and/or washout on the cement pour side. On the other sides a slow leak doesn't matter. After the concrete is poured, a slow leak on the concrete side won't happen (because of the greater pressure on that side), and won't matter (because it will only washout the surface). You may want to add more bracing -- your formwork will soften when wet.

Because the water is lighter, if won't be /sufficient/ to hold the formwork in place, but you can calculate how much of the force it will handle, and you will be able to use a cheaper and easier solution like adding 2 tons instead of 5 tons.

Not the answer you're looking for? Browse other questions tagged structural-engineering civil-engineering concrete retaining-wall or ask your own question.